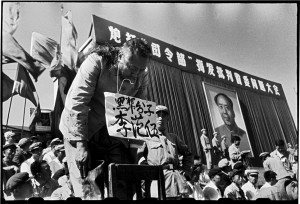 Accused of bearing a resemblance to Mao, Heilongjiang province Governor Li Fanwuâ€™s hair is brutally shaved, torn by zealous young Red Guards and made to bow for hours, clippings of his hair stuffed down his neck and shirt by an infuriated Red Guard. The banner behind him reads, “Bombard the Headquarters! Expose and denounce the provincial Party committee.” Harbin, 12 September 1966