In an unpublished essay, made in Sao Paulo, CIA DE FOTO collective presents its own take on the demonstrations that took over the city during June 2013. 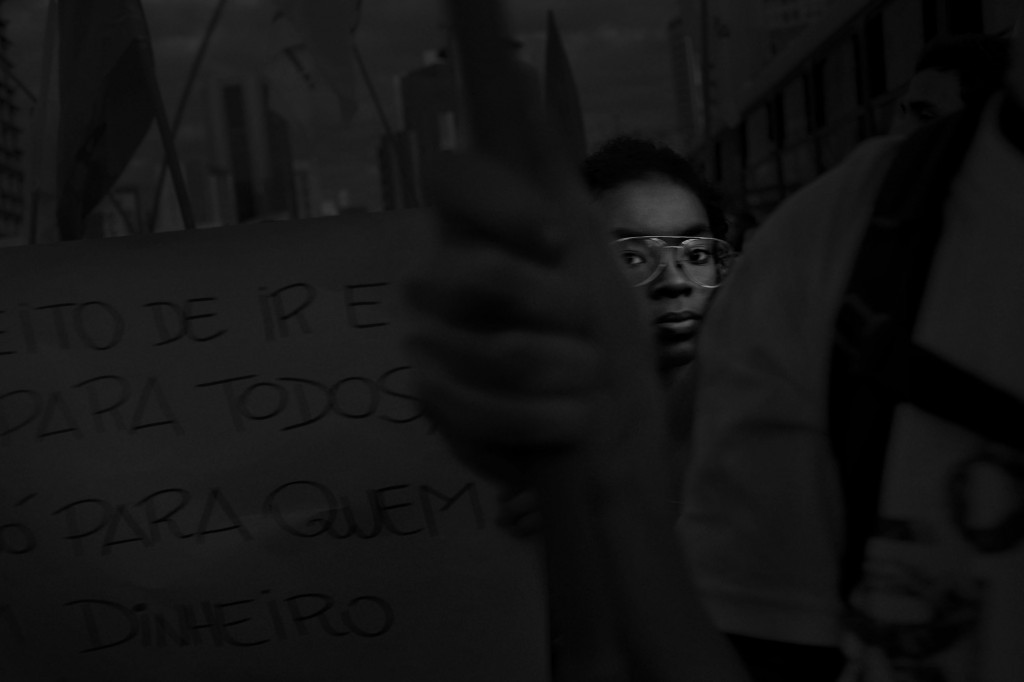 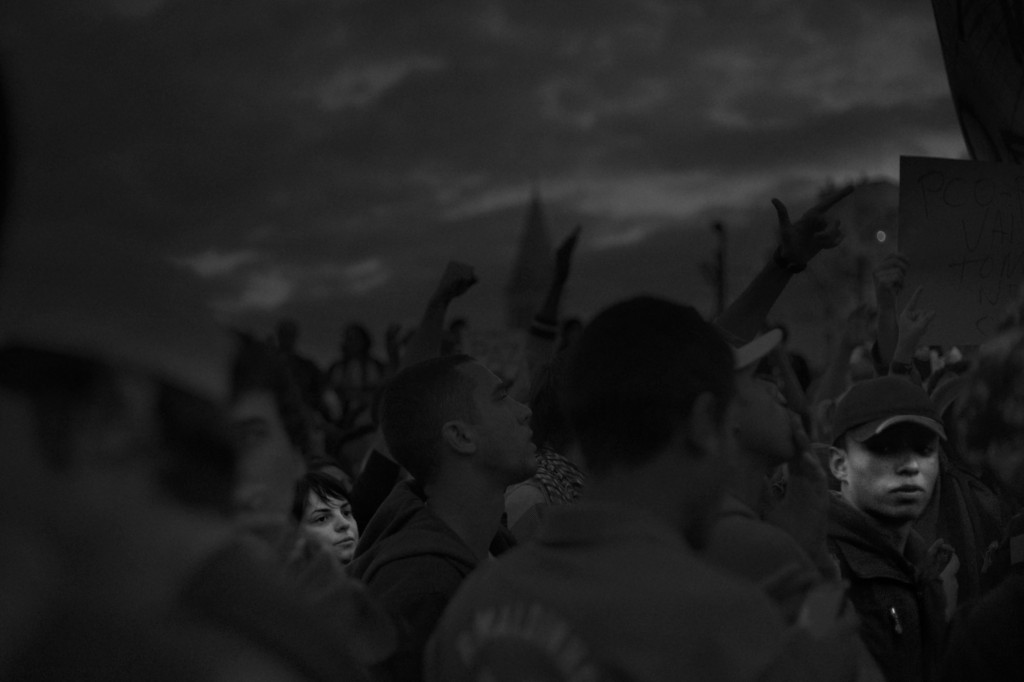 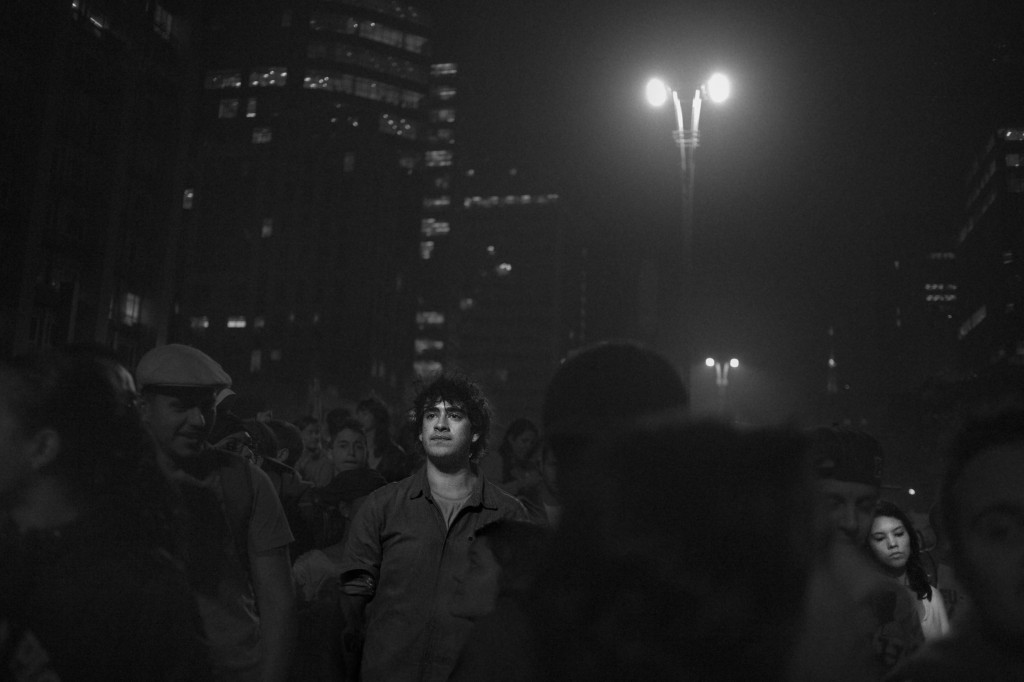 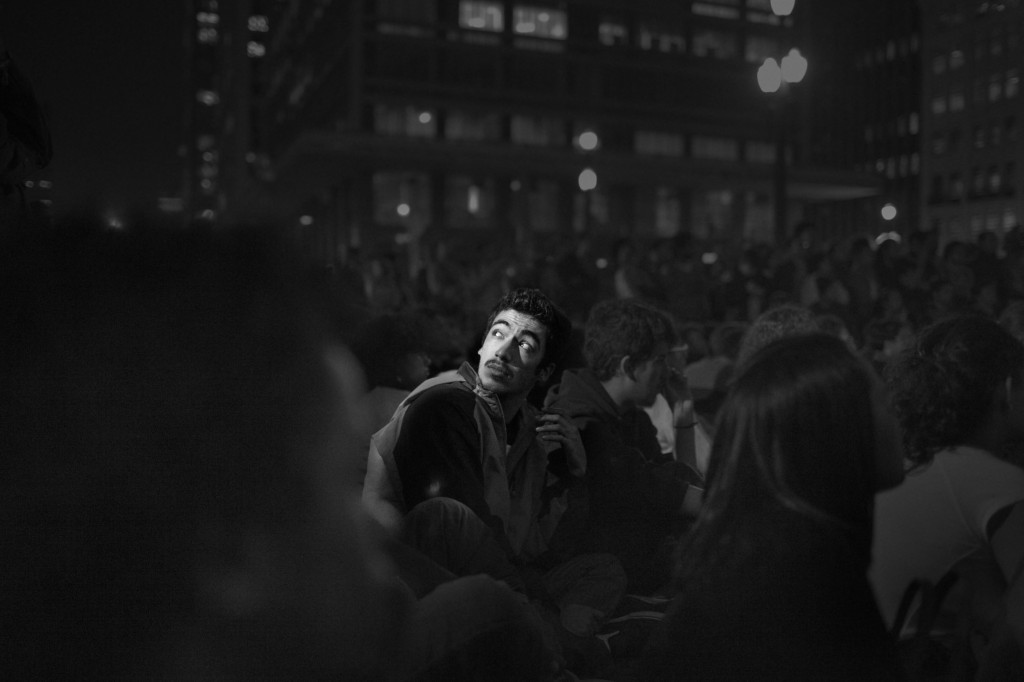 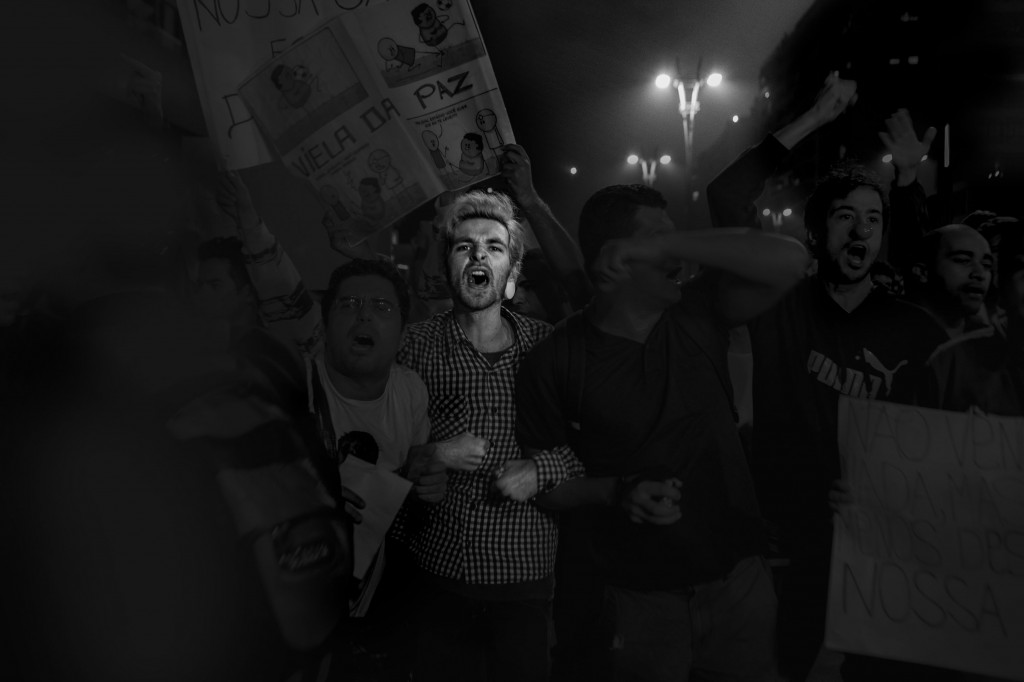 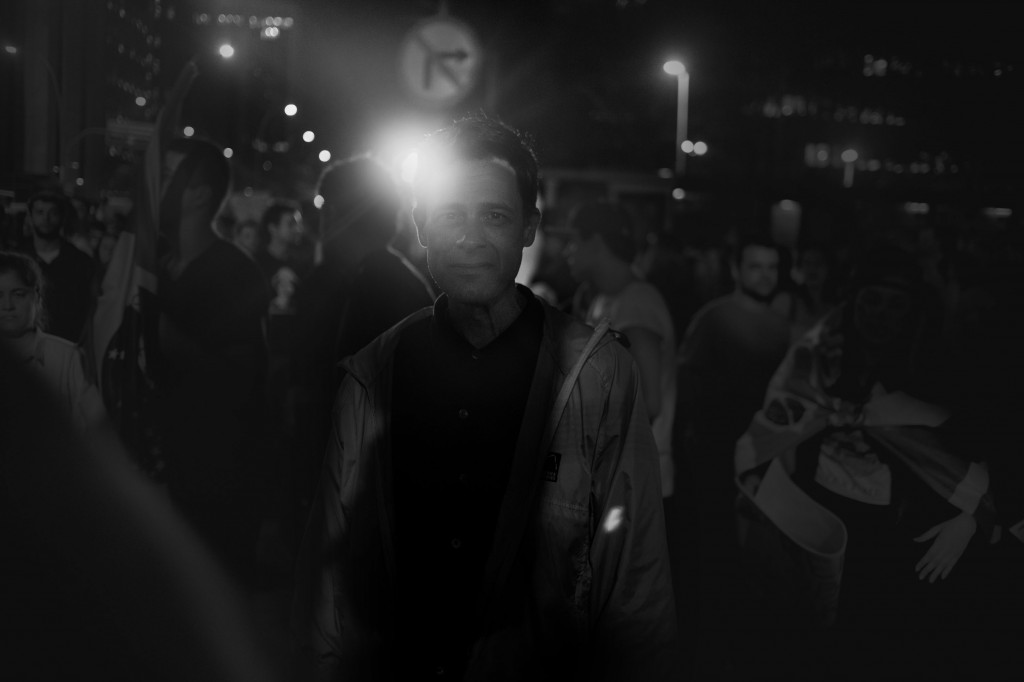 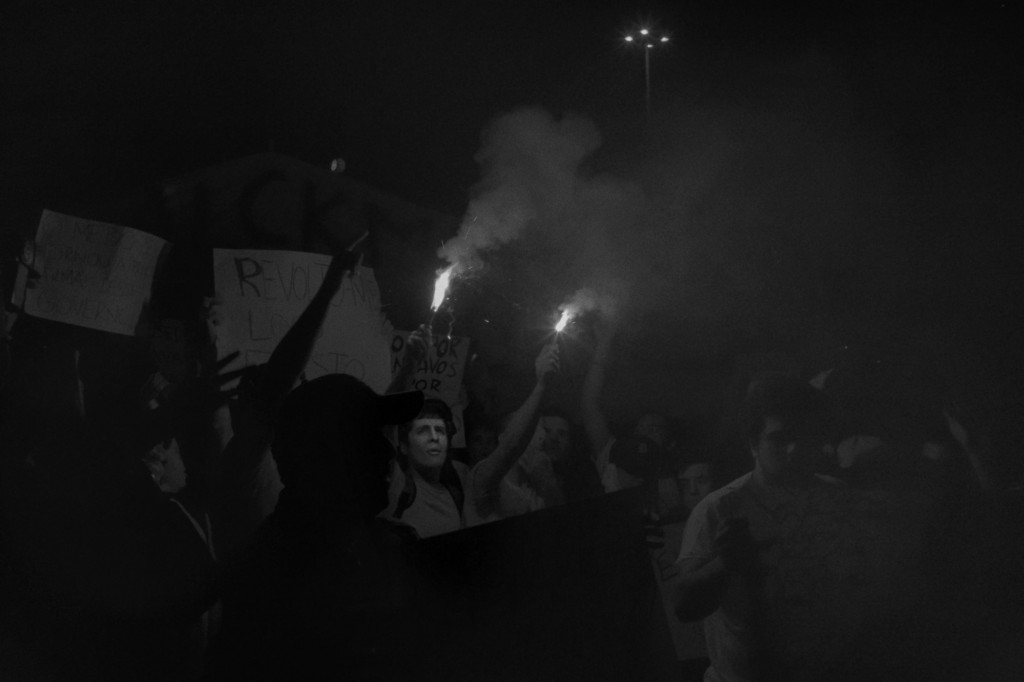 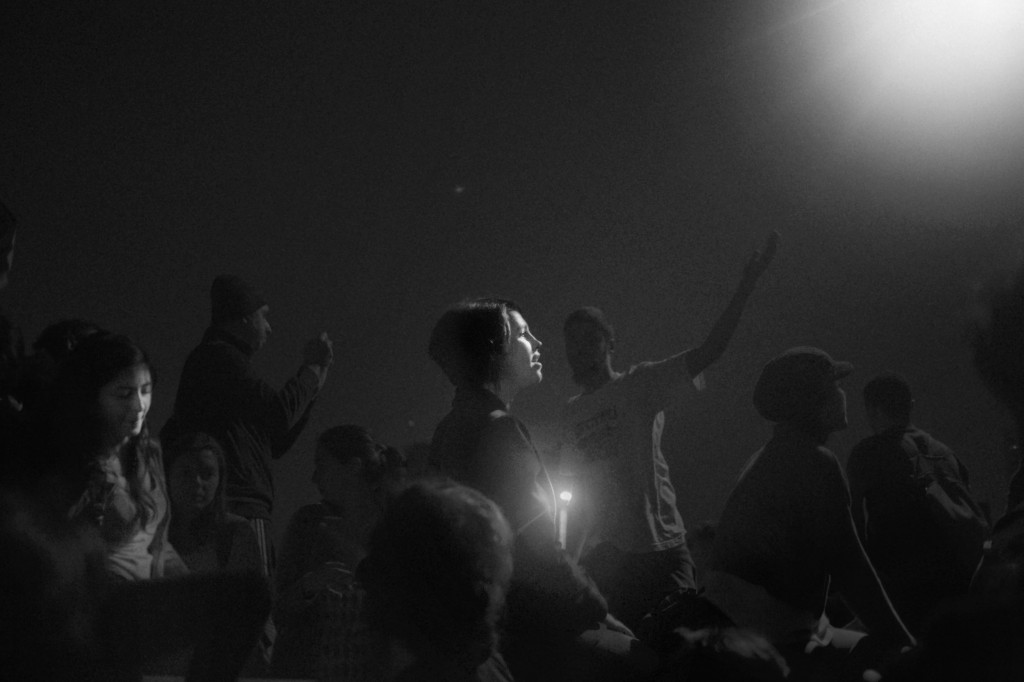 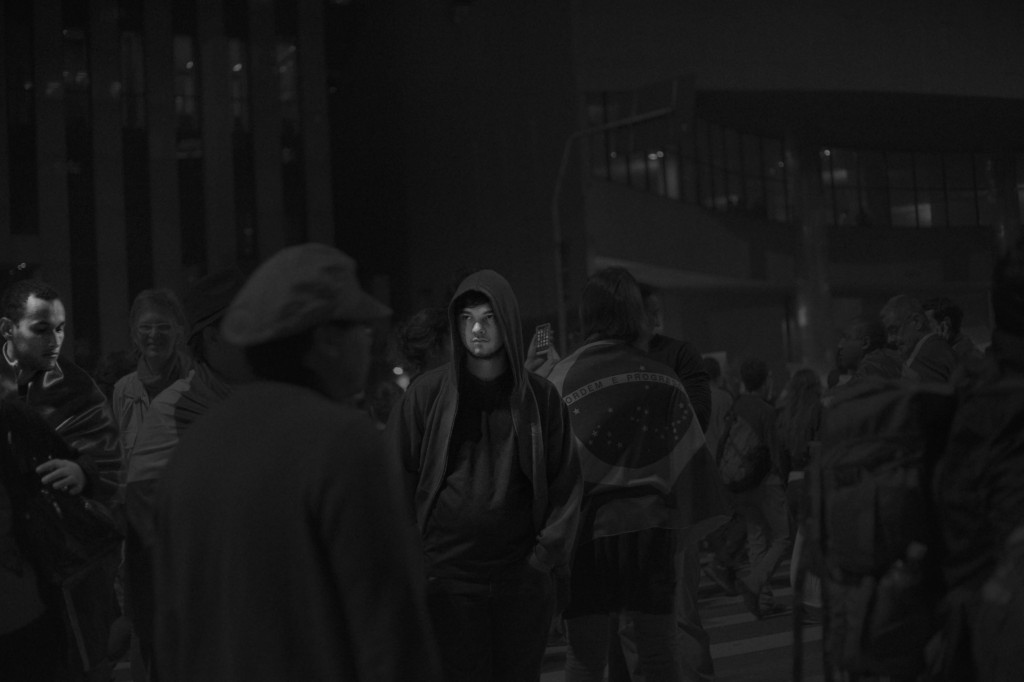 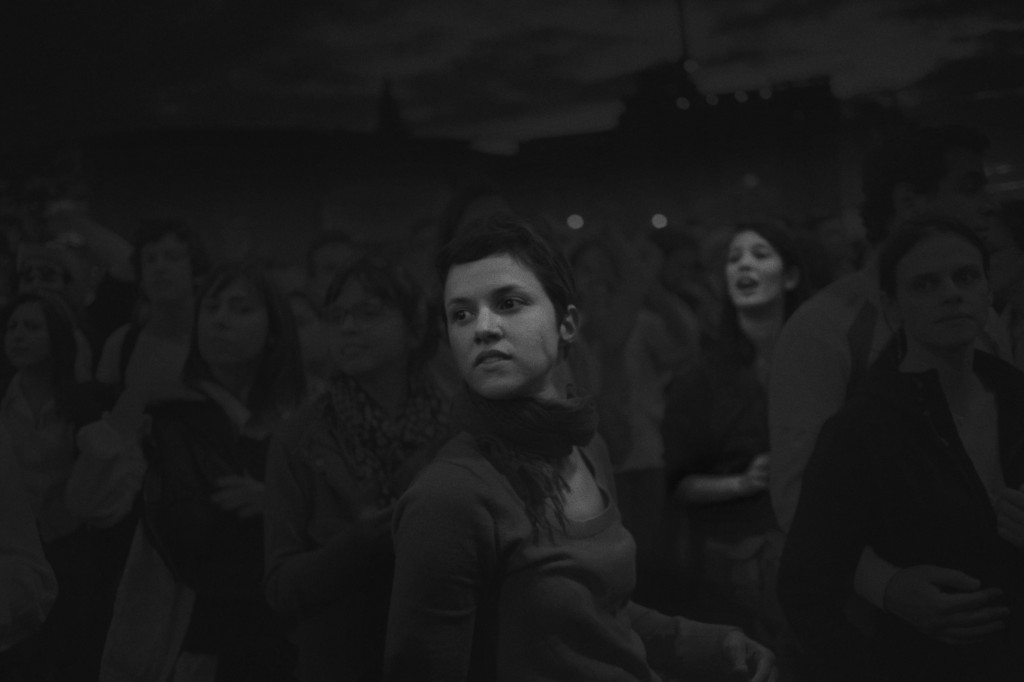 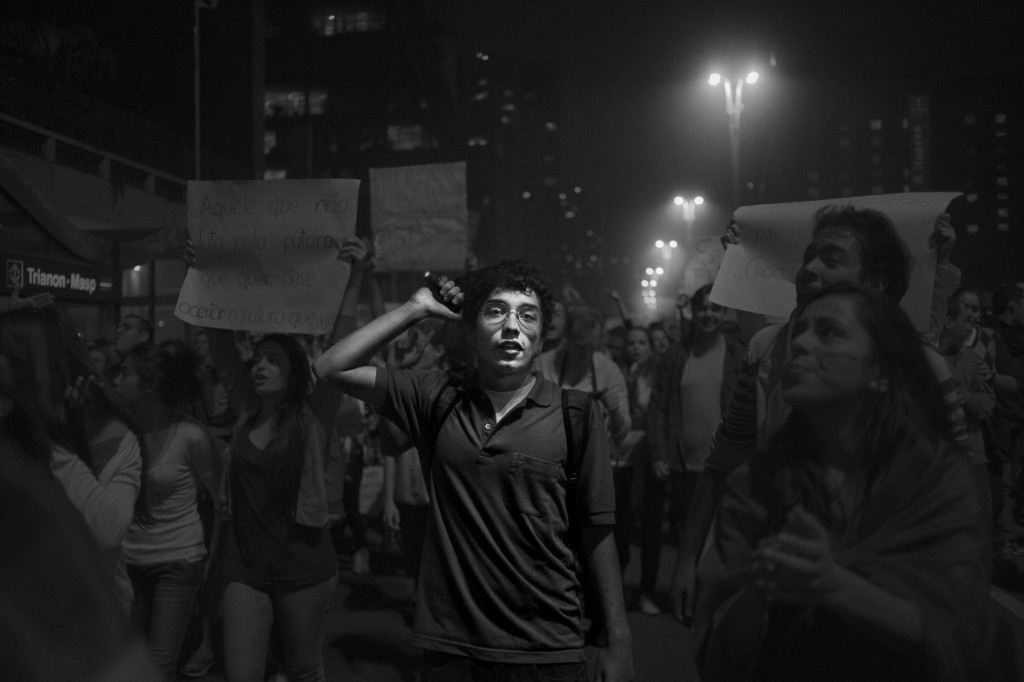 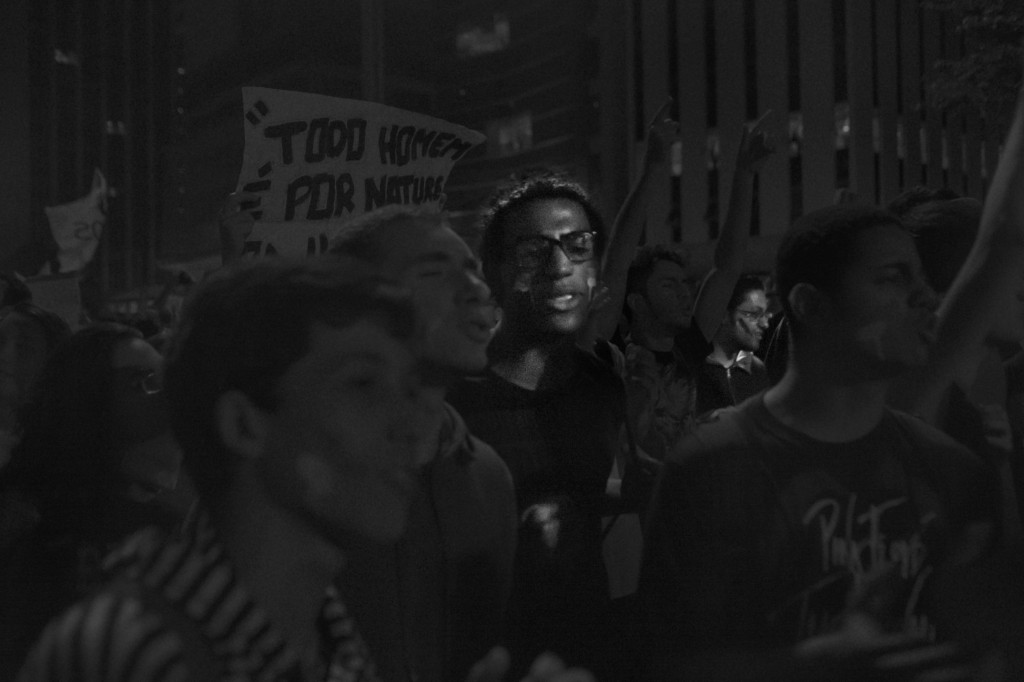 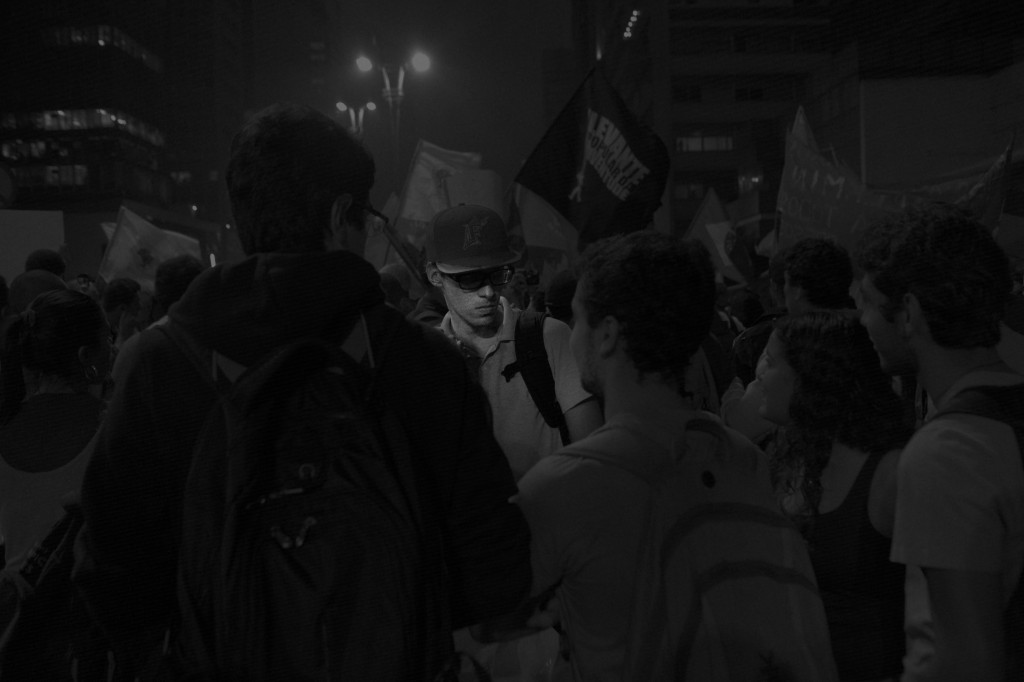 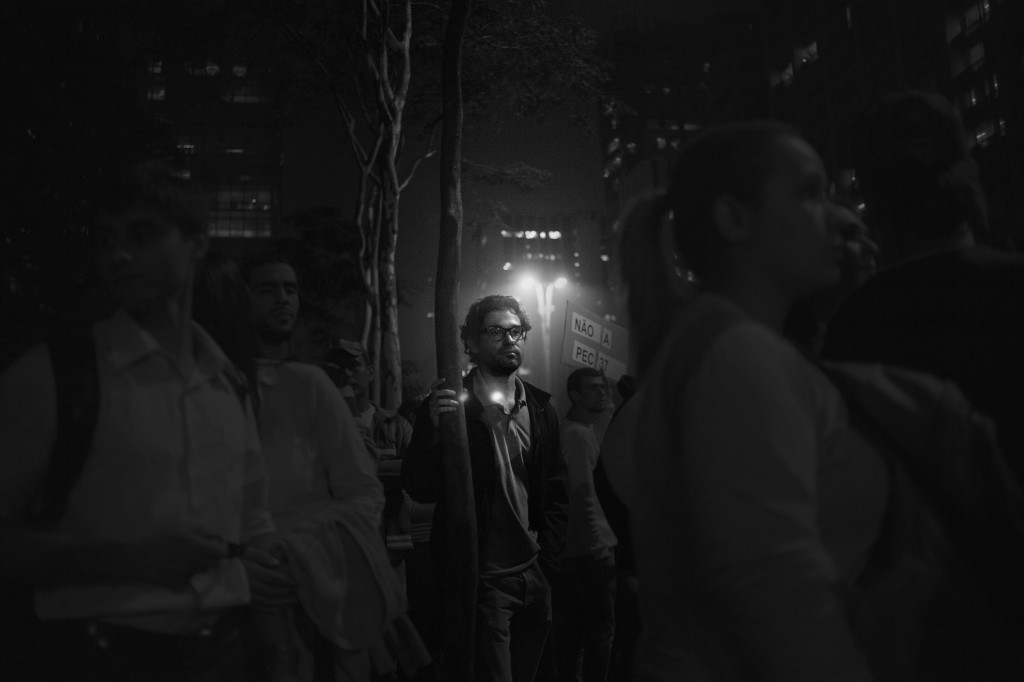 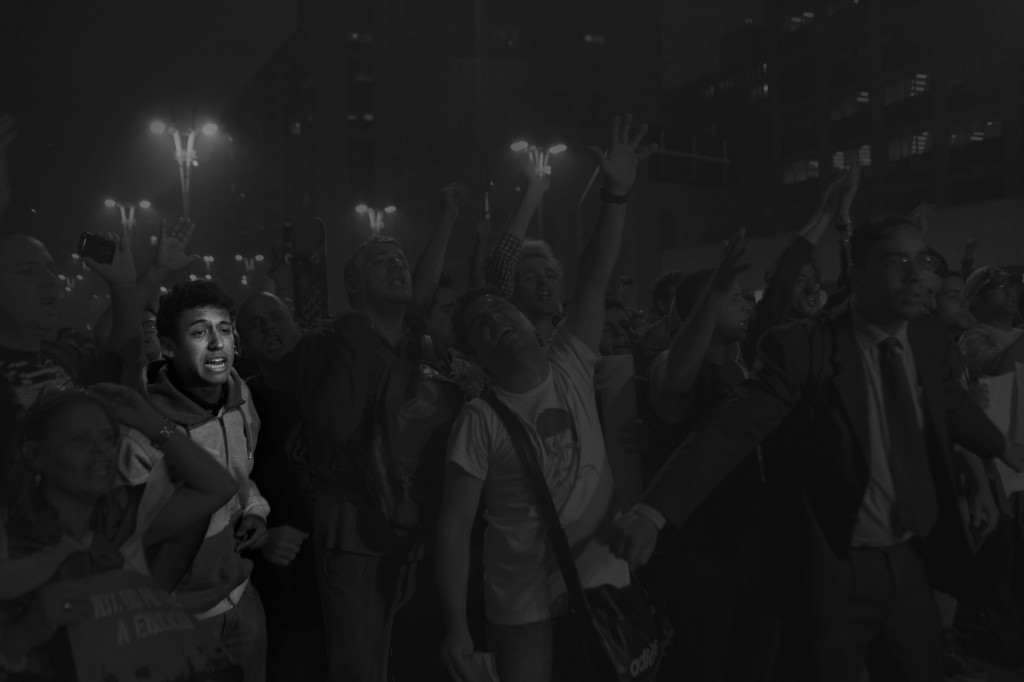 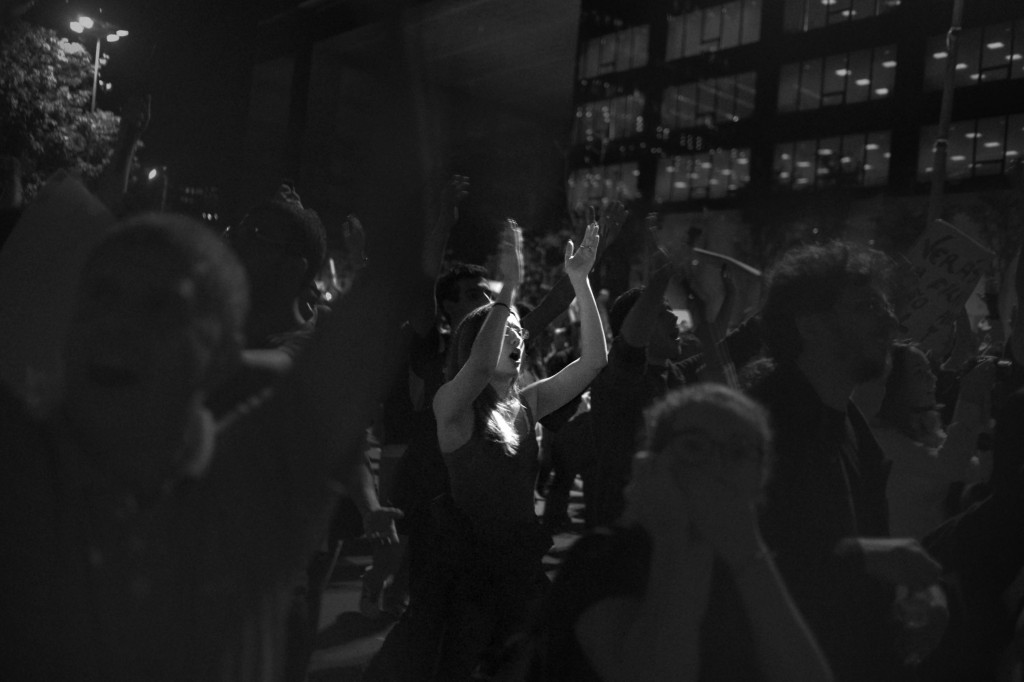 The boy’s bedroom window looked out over the jabuticaba trees, and as he was small, he could only gaze up through their branches from below. The window was big, enormous even, its heavy shutters enfolding the garden outside in their grasp. Their irregular forms left a few gaps when they were closed, not quite managing to shut out the afternoon sun.

Once, a sunbeam found a gap at the top of the window and pierced through the air in the room until it struck the floorboards. As he lay in bed, the boy saw each shining speck of dust as it floated in space. That was the first time. The tiny threads glinted and flashed, weightless, like stars, gently moving, like silver fish gliding through the depths of the sea. The air in his room was transformed into water and waves ebbed and flowed, made visible by those bright sparks. In the boy’s imagination, those glowing particles were living, sensitive intelligences, endowed with their own beliefs. He was sure that they were actually propelling themselves around in that mysterious way – it wasn’t just the currents in the air. The boy thought it was probably not advisable to breathe in those luminous beings and lay there, silent and cautious, on his bedspread, his nose in the shade.

The room is now another. That ray of light may look the same, but now it pierces other airs. It filters through the crowds that have been flowing through the streets of São Paulo since June, illuminating each human mote as they march. As in that old bedroom, the liquid movement of the air can be perceived, thanks to the sidelong, prankish, childlike back-lighting. And it is the human faces in the photographs that light up.

A face glows. It’s got a clown’s nose. Another smiles, surrounded by a mystical halo. The girl melts with languid eyes and shines again. The young man has a scratchy beard on his pale skin. All parade through the São Paulo night, in black and white. They glitter with silver. Could it be that they, too, are intelligent and sensitive? Could it be that they also believe that they are making waves in that dense air in which they float? Or do they think that they’re just surfing?

They are stars, but seeing them is a more than Parnassian challenge. This river of protesters flowed out from the streets, the buildings, the subway stations, buses and cars, but they were not announced by an official spokesperson. This downpour was sudden and unannounced, stirring the still, stifling air of a huge shaded room, where nothing ever happened under the gaze of mortal eyes. Not quite true: something happened, but in a strangely secretive way. Behold, there was a movement that was already in the air, cradling those hitherto unseen beings. There were no unions, political parties, hardly an NGO to be seen, nothing from the so-called “organised civil society” to prepare and channel these human floods, these squalls. So these wafts, these stirrings in the air could not be caught by the cameras or analysed by reporters, politicians, and analysts. All that remained for them to do was to declare their perplexity. A commonplace took over the public space: “We were taken by surprise, we’re still trying to understand.”

And yet, the air is in movement – you can see it in those sparks, illuminated by that silver ray visible in these photographs. Thanks to the ray of light. But where did it come from? How did this light get in? Maybe through that chink in the shutters on that west-facing window, always the same window. Perhaps it’s from a dumb lamppost by the curb or, who knows, it’s the doing of some piece of soft ware. This light, shining inside those human figures, highlights the moving air in absence of speech, throwing those liquid people into the streets. This is the air we must breathe. Now, the nose shall sniff out clarity.

Observers still find themselves “caught by surprise” and keep “trying to understand,” so much so that they do not stop observing. And that is how it was throughout the month of June, and July, and August: their gaze was abducted by those scenes of streets flooded with bodies, photographed as if they were zombies in one of these new horror films. They have escaped through rips in the cinema screens to frighten the cities. And all of society has not stopped looking. Without respite, without rest, the TV news have stuck to the protests. And yet, even looking and looking again, even with that unblinking gaze, the cameras have seen but little – and little understood.

Why? Maybe because they have only focused on those fearsome, roaring and threatening crowds, or on those docile wavers of patriotic posters, full of civility when posing for the lens. The cameras capturing those poses have smudged the surroundings. And miss what is actually the great protagonist, the surroundings. That’s why we have seen so little. An illuminating light is missing there, in that river of people, a light to reveal the humanity of each individual – and what is most human isn’t found in the exceptional but in the most commonplace. And the most commonplace was what surrounded them, the context. The chief protagonist was that invisible air. And the problem has been to see it.

And now, finally, these images give us a chance to find, within those masses, a face which is singular, unique, individual. One here, one there, and another and another and another. Here are the motes that reveal to us the liquid, and circular movement of the air, which before seemed motionless and stagnant. These multiple faces, irreducibly personal, are also interchangeable, any one like any other. They are like grains of dust suspended in the air of a darkened room. That light that singles out each face does not clarify, does not illuminate, does not explain the entire enigma. It just shows that there are new shadows, areas of darkness and blind spots. Just as essential to that clear face in the centre of the photo is the crowd that frames it, the crowd in the twilight. This extraordinary human explosion was the work of many but might as well be the work of just one. Just one air. The name of the face does not matter. The picture needs no caption. What counts is seeing that the air has started to move.

Something in the spectacle that erupted in June recalls the power of charisma, that quality that gives someone ascendancy over their fellow men. Could it be that the crowd itself is a charismatic being? Charisma sucks in our eye like a magnet, but that alone does not explain what happened – and is still happening, on the skyline.

The country’s eyes are upon that marching, raging, laughing, bored multitude. All this at the same time. They are looking at charisma. This unblinking, magnetic gaze reveals a desire to understand the object upon which it rests. This somewhat incredulous, somewhat dazed look doesn’t want to see what is there, but hopes that, any time now, something will reveal itself and then, yes, there’ll be something to see. Those who look at charisma look for illusion.

It turns out that the masses in the streets are not trying to gain ascendancy over those who look, nor is it craving power for itself. The river of people that flows through the city just wants to earn the respect of those in power, as if to say: “I exist; I have a face, a name, though my name is irrelevant – and I want respect.” It does not seek power. It wants to limit power. And that’s why charisma is not the answer to the mystery.

The mystery is of another order – of time. The spectator senses – without realising it – that they are seeing naked time itself, face to face, time sliding its transparent body through those marching people. Faces that light up and then disappear, as with those suspended specks of dust, that vision of something greater than the world itself: the body of time.

The master teaches that time is the fabric from which we are made, but time is more than that. Time is the fabric of human existence: we are the material of which it is made, not the opposite. When an inner light illuminates the face of a demonstrator, an escape route is glimpsed, a path ahead where time can be seen, time in revolt. This is the moment when there is neither State (nor capital) that can give credence to that opaque fantasy that time may be governed. No power exists with the strength to govern the destinies of those anonymous, smiling multitudes in the street. ///

Cia de Foto is a collective established in the last decade, when Rafael Jacinto (1975) and Pio Figueiroa (1974), who worked for the newspaper Valor Econômico, started sharing their reporting and credits. Soon after, they were joined by João Kehl (1982) and Carol Lopes (1982) and were contracted by the newspaper to handle all the photography in the São Paulo office. The Cia has gradually established its own style, which is marked by its intense digital post-production work on the images and the inclusion of other artistic mediums, such as video, cinema and music.

Eugênio Bucci is a journalist and professor at the School of Communication and Arts at the University of São Paulo.