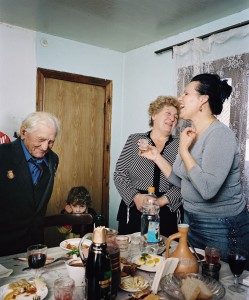 Vladimirovka, ABKHAZIA, 2009 – Mikhail Nayevich Dzudzumiya (85) is WWII veteran and has lived almost all his live in the small Abkhazian village Vladimirovka. He isn’t the type of person who likes to show that off with his medals. Every year on Victory Day he watches the parade on the Red Square on his television while drinking a Wodka and eating a piece of bread. From left to right: Mikhail Nayevich Dzudzumiya, his grandson, his daughter Natasha and a friend and director of the local Dom Kultury Valentina.
¬© ROB HORNSTRA/+31 6 14365936