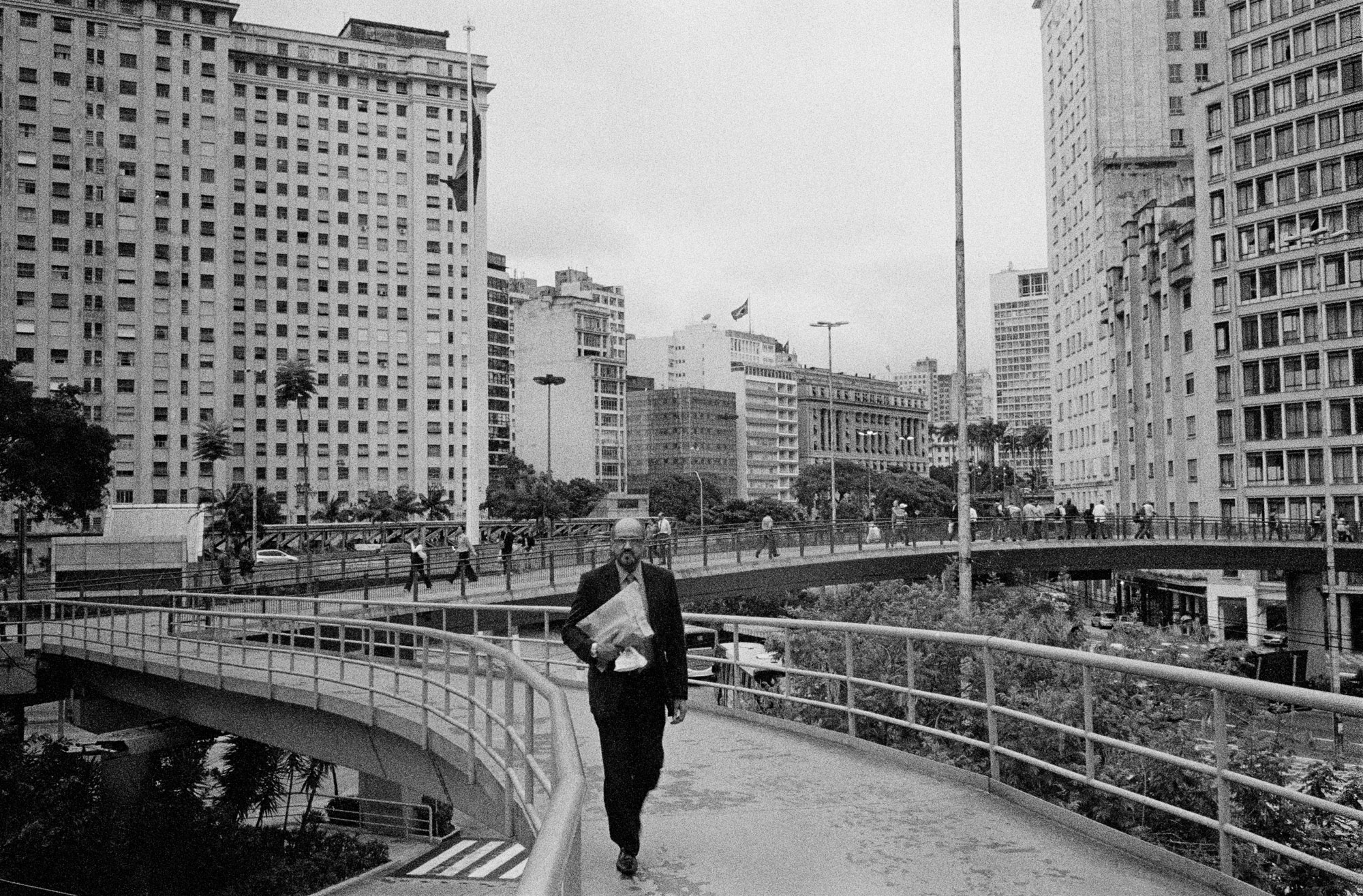 The first exhibition of the new Contemporary Photography exhibitions program of Instituto Moreira Salles is São Paulo, Beyond Reach, by artist Mauro Restiffe. He was invited to continue his work on the city of São Paulo, which he began with an essay on ZUM magazine #2.

See below the images from the exbibition and read the text by curator Thyago Nogueira.

In January 2012, the military police stormed the Luz district in the centre of São Paulo to evict the many drug dealers and users who had settled in the area known informally as Cracolândia (“Crack Land”). Images of sticks, stones, truncheons and police horses filled the news bulletins as residents, local traders and addicts fled to other areas of the city. The inappropriate action put into question an ambitious political program, known as Nova Luz. The project was supposed to solve the neighbourhood’s problems by the compulsory purchase of run-down properties, demolitions and tax breaks for companies willing to invest. With the incentive of a potential property boom, there was a real threat that this old area would be razed to the ground. Just as the spread of crack around the region only made the news when it was already well established, the destruction of a district is a slow and traumatic process, in danger of going unnoticed.

Cities are living organisms – which are born, grow and develop. They rarely die and usually survive past those who created them or live in them. One-off events and long-term, more gradual changes are both part of their existence. At the invitation of ZUM magazine, Restiffe photographed the Luz neighbourhood days after the police action. His camera was less focused on that specific event and more concerned with giving form and texture to the urban consequences of the years of neglect to which the district has been subjected. Decaying buildings, derelict land, people walking aimlessly around or as if leaving the place – all are images of a gray and gloomy scenario, exposing the painful scars of the neighbourhood.

It is this strange life of cities with which much of Mauro Restiffe’s work is concerned. This book is an extension of the project he started in 2012. Invited to deepen his vision of São Paulo, Restiffe started to take longer walks, venturing into other districts. For months he walked the streets in the centre of the city, through Sé, Brás, Campos Elísios and Barra Funda and farther afield, to Vila Romana, Vila Congonhas and Itaquera. The result of his project can be seen in the 50 photographs shown here, both a visual essay on the human, architectural and topographical landscape of São Paulo and a perceptive vision of the political and social tensions which permeate the urban space.

The varied ways in which we use the city, our relationship to its architectural heritage, the many separate planes created by the urban relief – all this is perfectly articulated in the photographs, made of a monochrome web of tiny silver particles. The works combine various moments in the life of the city. Everyday events, such as the daily commute or a weekend outing, are shown alongside the less ordinary, such as one of last year’s street protests or the destructive fire at the Memorial da América Latina (The Latin America Heritage Museum). The space and time of cities is revealed to us, the essence of what gives them body and life.

Where there is life, there is struggle and conflict. The photograph of the Museum of Art of São Paulo is a good example of how Restiffe combines complex elements and situations in a single image. All we see of Masp, which was designed by Lina Bo Bardi and opened in 1968, is the open space it spans and the view of the city it provides. The open space was almost fenced off after being constantly occupied by homeless people, protesters, drug users, tourists and passers-by. Its use has been subject to controversy, with different voices trying to find a common solution for the space. The striking view of the city horizon that Lina preserved with her design is dominated by the tower blocks and cranes that the Italian architect wanted to keep at their distance. In the foreground, an intense backlight envelopes the museum and people while in the background the city is gray. In showing the distance between the space as it was planned and the reality of the disputed uses to which it is actually put, Restiffe succeeds in giving his work political overtones.

In 1935, a young French lecturer came to Brazil to work at the University of São Paulo. Claude Lévi-Strauss was not yet an established anthropologist, but his later description of the life cycle of cities based on his São Paulo experience resonates strongly with Restiffe’s work.

Cities in the New World, says Lévi-Strauss in Tristes Tropiques (1955), suffer from the lack of a proper time dimension: they are the daughters of compressed time. Not only are they new cities, but they move directly from youth to decrepitude without passing through the age of wisdom. “For European cities, the passage of centuries elevates them; in the Americas, the passage of years to which a city is subject are years of decline. They are not only built more recently, they are built to be renewed with the same speed with which they were erected, which means to say – badly. As they arise, new districts are not formed as proper elements of the urban landscape. They are too bright, too young, and too cheerful for that. They may be thought of as a fair, an international exhibition, built to last for just a few months. And then the party ends and these impressive curiosities fade away: the facades start to peel, the rain traces furrows in the accumulating grime, the style goes out of fashion, the original urban plan soon disappears under the demolitions required by the impatience of others. It is not a contrast between new cities and old cities but between the more rapid evolutionary cycles of the one with the slower rhythm of change of the other. Some European cities gently fall asleep as if dead; those of the New World live feverishly, suffering from a chronic disease: eternally young but never healthy.”

There is no doubt that part of the frustration and fascination which São Paulo exercises on its inhabitants comes from this accelerated cycle of change and the ensuing difficulty of properly taming the urban space. With 11 million inhabitants, the city’s infrastructure is massive and decaying, subject to the conflicting orders and counter-orders of successive city administrations. A photo taken by Restiffe of the Largo da Batata is a good example of how art can reflect on urban space. The image shows a large square of unfinished pavement, punctuated by a pine tree and various other scattered trees, pipes and abandoned logs; with a profusion of new and old electricity poles supporting chaotically organised wires and cables. The square is flanked by buildings of different eras and styles: the old church of Our Lady of Monte Serrat, buildings with mismatching facades, the huge postmodern block that houses Sesc Pinheiros. The way the wires cut the scene and the flow of the pedestrians across it adds new planes and rhythm to the image. Some figures cross the street using the pedestrian crossing, others ignore it; some walk on the pavements while others walk in the street, next to the curb. An important city intersection, the square is simultaneously being rebuilt and falling into ruin.

As an exhibition work, this image of the Largo da Batata extends for 1,5 metres. Perhaps unintentionally, Restiffe’s work draws attention to two important currents in the history of photography. One is the social tradition of American street photography, with its links to the press and interest in people and human drama. The other is the movement fostered by the photographers of the Düsseldorf School, who are fascinated by the spectacle that architecture represents. Renowned photographers such as Robert Frank, Garry Winogrand and Lee Friedlander trod the streets of New York from the 50s, taking explosive and introspective monochrome images – poignant portrayals of the conflicts that permeated American society. In Germany, photographers such as Andreas Gursky and Thomas Struth depicted urban constructions with the descriptive clarity that comes from using large format cameras and manipulating dozens of megapixels. The gigantic images and meticulous procedures they followed brought photography into contact with the history of conceptual art and of painting. People, architecture, the monumental scale and the snapshot are all part of Restiffe’s concerns.

As we get closer to his images, the urban scenes dissolve into tiny grains of silver, the result of enlarging highly sensitive photographic film. Although they are very similar to each other, no grain is the same. Perhaps there is some order linking them, despite the apparent chaos. And that is how we feel in the city. It is not difficult to think of this grainy photography as a metaphor for our social and urban organisation.

Even if city planners were indifferent to space, cities would still be the product of an underlying mental structure, a structural order almost beyond reach, that would insinuate itself into the empty spaces “a bit like our unconscious concerns which take advantage of our sleep to be expressed.”, says Lévi-Strauss on the foreword of Saudades de São Paulo (1996), his book of photographs of the city taken between 1935 and 1937.

After tirelessly exploring and photographing São Paulo perhaps Restiffe’s intuitions have given him some perception of order. While combining plans, views and concurrent events, while exposing the interaction between space, people and architecture, and while suggesting that the urban experience is a fragmented reality, defined from a microscopic viewpoint, the artist also acts as an unconscious planner – building, without even realizing it, a new visual representation of the city.///

In this six-minute video with English subtitles, Mauro Restiffe shows how he conceived and created this photographic series.

Thyago Nogueira (São Paulo, 1976) is the editor of ZUM photography magazine and head of the Contemporary Photography Department at the Instituto Moreira Salles.

Mauro Restiffe (São José do Rio Pardo, 1970) graduated in Film from Faap in 1993 and studied photography at New York University and International Center of Photography. He lives in São Paulo.