The dark-eyed young man seems exhausted. “Caboclo”, of mixed native Brazilian and white descent, he has the toughened look and posture of a fragile body. These subjects, anonymous and of a similar physical type, are seen by society as outcasts and are the protagonists of the paintings of Éder Oliveira.

Born in Timboteua, a town in northeastern Pará which has little contact with high culture, Oliveira entered the Federal University of Pará in 2004 to study for a teaching certificate in art education, graduating in 2007. During his studies, he worked in Sesc [a nation-wide private social and cultural organization] in the state capital Belém, remaining there until 2014. It was there that he had his first contact with the production of exhibitions and cultural events, a fundamentally important experience in his development as an artist. He was invited to participate in the 31st International Bienal of São Paulo in 2014 and caught the attention of the artistic elite of Brazil, which is concentrated in the southeastern part of the country. Two years later, he exhibited in Germany and was awarded the Lingen Art Prize.

His work includes watercolors, urban art, site-specifics, objects and oils on canvas. But this pictorial universe is permeated by the photographs that appear in the media and the techniques of reproduction he uses. His references are photographs taken in Pará, especially those linked to the artists that form the Fotoativa Cultural Association in Belém. For years, the association’s artists have participated in Brazilian and international exhibitions, and have worked as photojournalists for the local tabloids. This combination has enriched the visual culture of the region, which, in turn, has fed the work of well-known photographers such as Wagner Almeida and Alberto Bitar.

Oliveira tenaciously portrays ordinary people, of black and native Brazilian origins, whose images are inextricably linked to sensationalist reports on crimes that have yet to be investigated. His creative process involves flipping through piles of Belém’s newspapers and tabloids every day. He doesn’t read the news reports related to the images he selects, nor does he concern himself with biographical details of the subjects he selects, who are frequently photographed without warning, in embarrassing situations. The almost complete absence of female figures in his work draws our attention. For Oliveira, this is due to the fact that women are less present in both crime statistics and in the newspapers that report on the crimes. 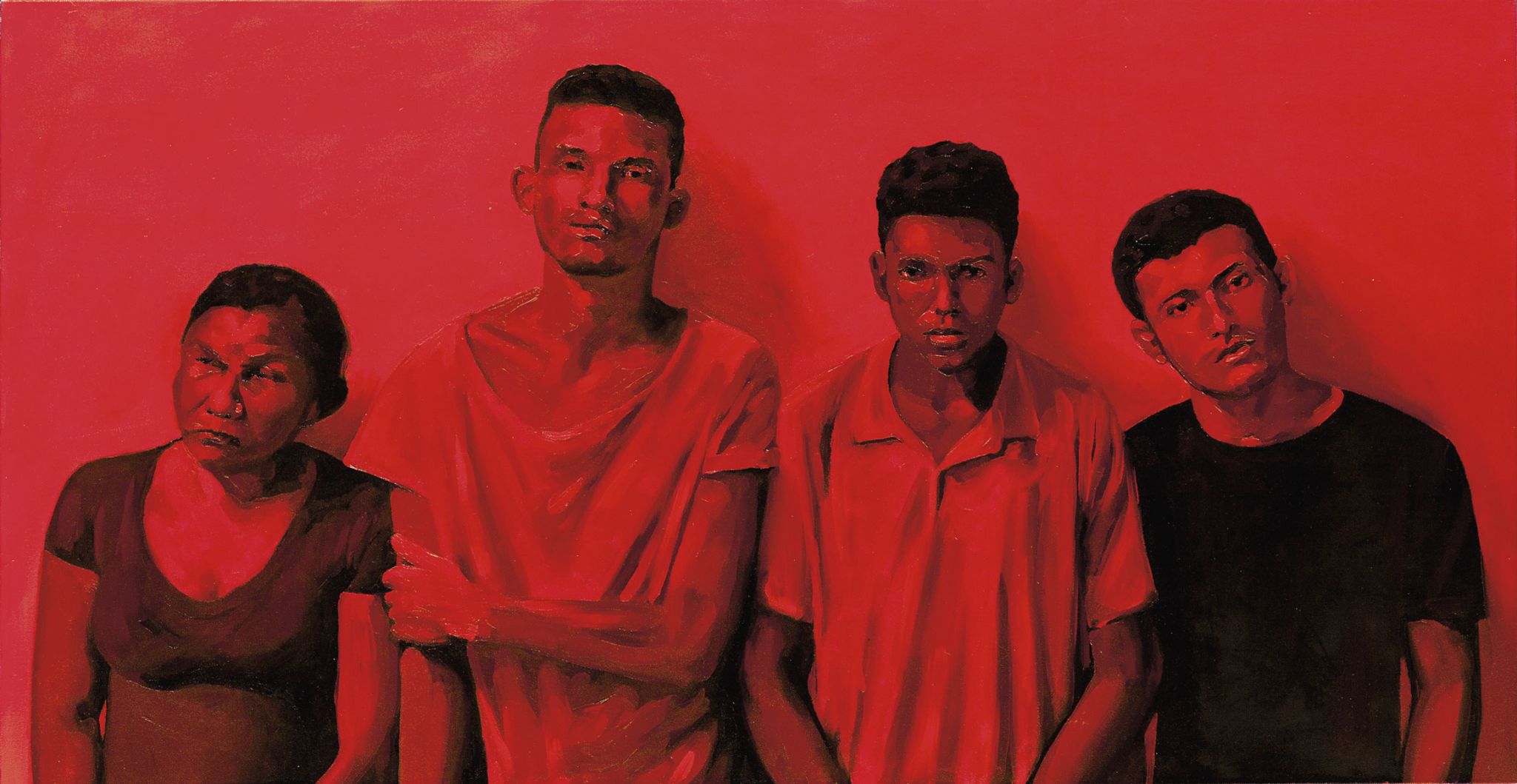 Oliveira’s paintings are somewhat two-dimensional and flat, due, in part, to their origin in the transposition from the press photograph to the canvas – the artist having no direct contact with those he portrays. This distancing establishes a platonic relationship between the artist and his subject. The artist plunges passionately into this stark, genuine and painful reality – emotions that he does not hide when speaking of his visual research. Through his work, he draws our attention to the way the perverse mechanisms of social exclusion mark the lives of poor young people, sidelining their individual identities. And also unlocks, with sensitivity, the relationship between image, skin color, identity and marginalization.

The work of Oliveira highlights the production and publication of photographs of those who are considered criminals a priori, at the same time involuntarily recontextualizing the original images – taken from mugshots. The photographs used by the artist are transformed into paintings which will be republished the newspapers after being shown in art galleries. 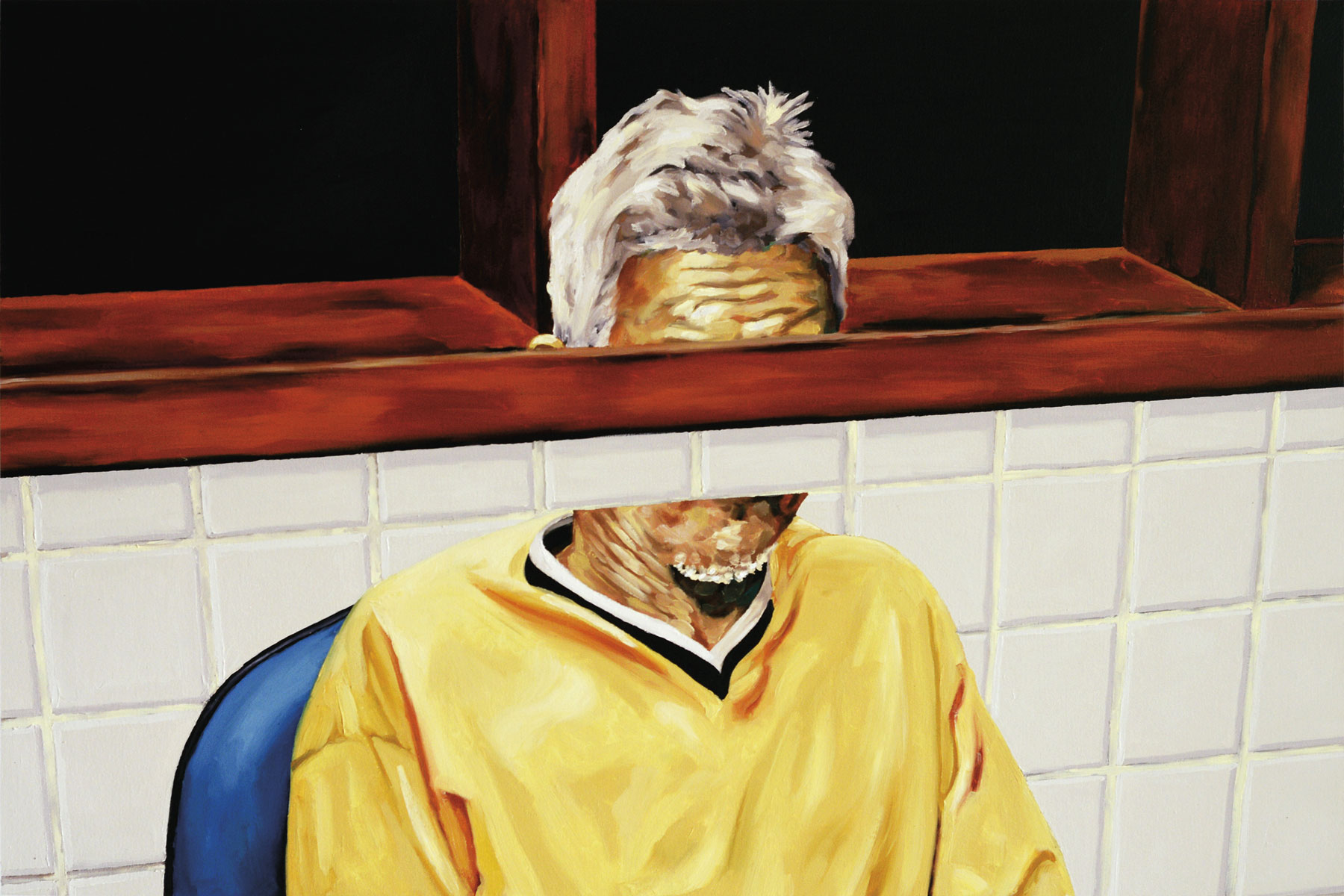 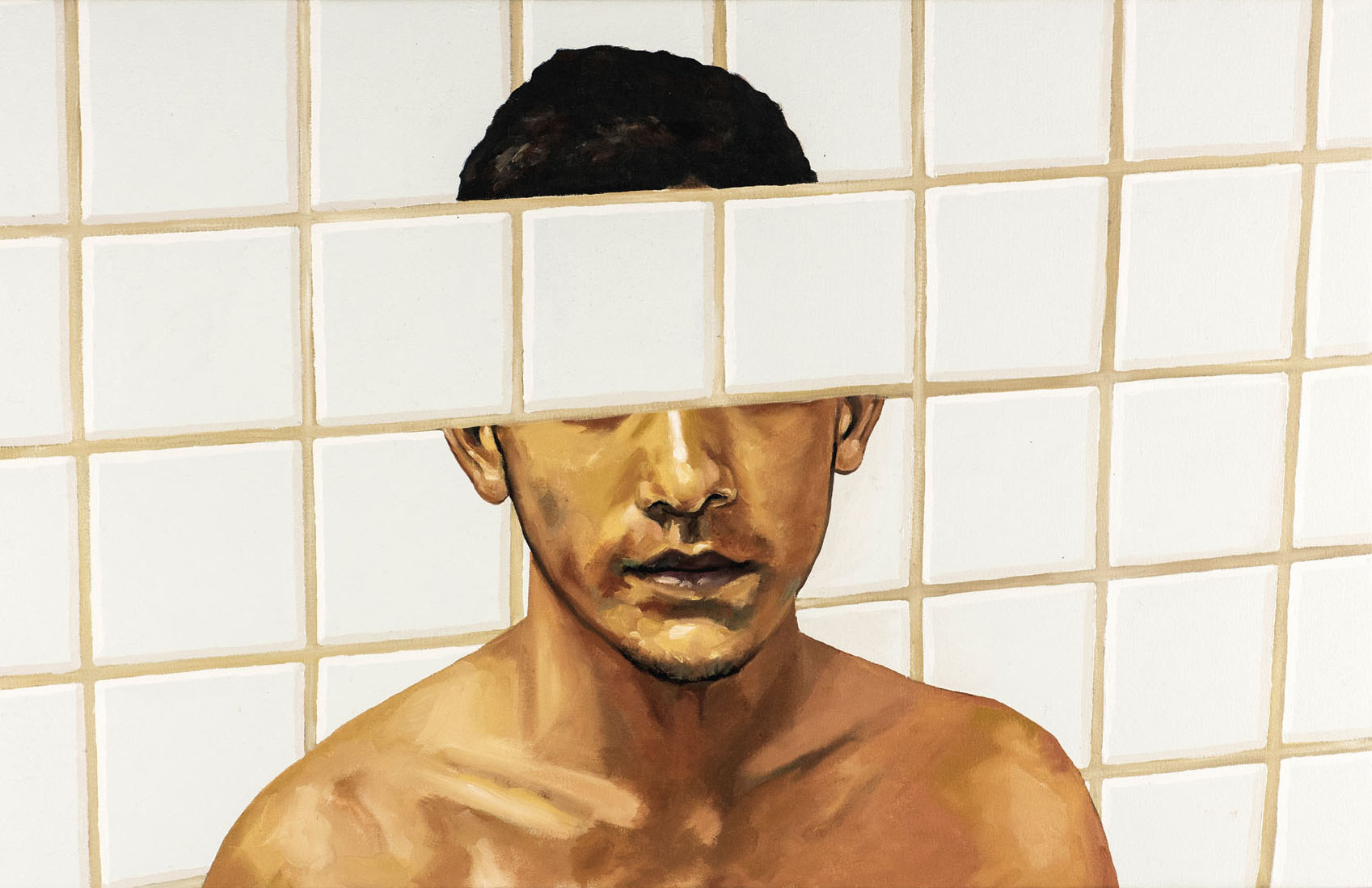 In these paintings, the figures are executed in hard outline with strong contrast, and are notable for the presence of ochre, reddish-brown and purple-bluish hues. In general, the chromatic variation of the works is narrow and highlights the unique tints which the painter has created to have more control over the red and green colors he uses. The artist, who also teaches painting, suffers from color blindness, which makes it difficult for him to distinguish between these colors – a paradox that led him to develop his own methodology, producing pigments and inventing codes to define the tones in a palette of eight to ten colors. The limitations imposed by his color-blindness have become distinctive elements of his paintings.

In the monochromatic canvases of Pági­nas vermelhas [red pages] (2015), for example, the repetition of a color that someone who is color-blind barely understands matches the physical types of those he paints, and emphasizes the political nature of his work. His use of red is a reference to left-wing parties, the social struggles and the annual genocide of 60,000 Brazilians – black and mixed-race young people, the police, confessed criminals, LGBTQ minorities, activists, community leaders, native Brazilians, poor women and children.

In his Alistamento [enlistment] project (2015), in which green predominates, Oliveira has opted for an ethnographic approach, displaying posters near army barracks in Belém which invite young soldiers to participate in the work, which included a questionnaire and a photo session. He asked two questions similar to those asked during the decennial census carried out by the IBGE, the federal statistical institute. “How do you see yourself?” and “How do you see the Amazonian man?” The two groups of responses showed the difference in perception of the recruits in relation to themselves and others, in spite of the similarity, especially physically, between those who consider themselves patriotic representatives of Brazil and the others. The photographs of the soldiers in camouflage uniforms served as the basis for large-format paintings on wood, which were displayed in the streets of the city.

In Oliveira’s urban art projects, he confronts the communities of Belém with enlarged paintings of anonymous faces on the walls of roads where large numbers of pedestrians pass by. They are faces that are not normally displayed in this way: ordinary people, sons, brothers, nephews, grandsons, neighbors. The structure of the work recalls the easel portrait, and, at the same time, a collage of newspaper images cut out from the background. The monumental scale makes the work part of the public space, interacting with the passers-by and with the profusion of graffiti, political and religious slogans and advertisements, as well as other elements of the heterogeneous urban context. In the streets, art is ephemeral, and the photograph will be, again, an important ally in showing the work to the public, overcoming the lack of places to show it and an official preference for more picturesque works, which has led to Oliveira’s work being seen only by a few in the city where he works.

Paradoxically, the social criticism in his work is emphasized by his chosen medium – the portrait, the origin of which dates back to the whims of the aristocrats, who employed them to immortalize prominent society figures, or the bourgeois artistic milieu. Oliveira questions this structure with his portraits of men despised by the privileged classes and transforms them into symbolic capital in the contemporary art circuit.

Although they are the main object of interest to the artist, the faces are not always shown in his work. Some canvases depict the attempt by the models themselves to hide their faces at the moment the photograph was taken while in others “censures” part of the image or covers elements with textures. In his recent series, the artist covers the face of those he depicts with the pixellated digital filters which are applied to videos and photos in order to preserve the organization or the individual from unauthorized use by third parties or the subjects themselves. The geometry of the pixel applied to the different faces is such that the color palette becomes important in making each work unique.

In Monocromos [monochromes] (2016), for example, a small fragment of the face of the accused is clipped from the press photograph and converted into pixels, giving rise to monochrome canvases that represent the different skin tones of the Brazilian melting pot. These canvases include an embossed caption with the initials of the portrayed, and the month and year when the photograph was published in the newspaper. Even without a human figure or a clear text, the work emphasizes the naturalness with which we accept the summary condemnation or execution of dozens of unknown individuals. The majority of these paintings have neither title nor face, emphasizing the expurgation of certain groups of citizens. They are anti-portraits. 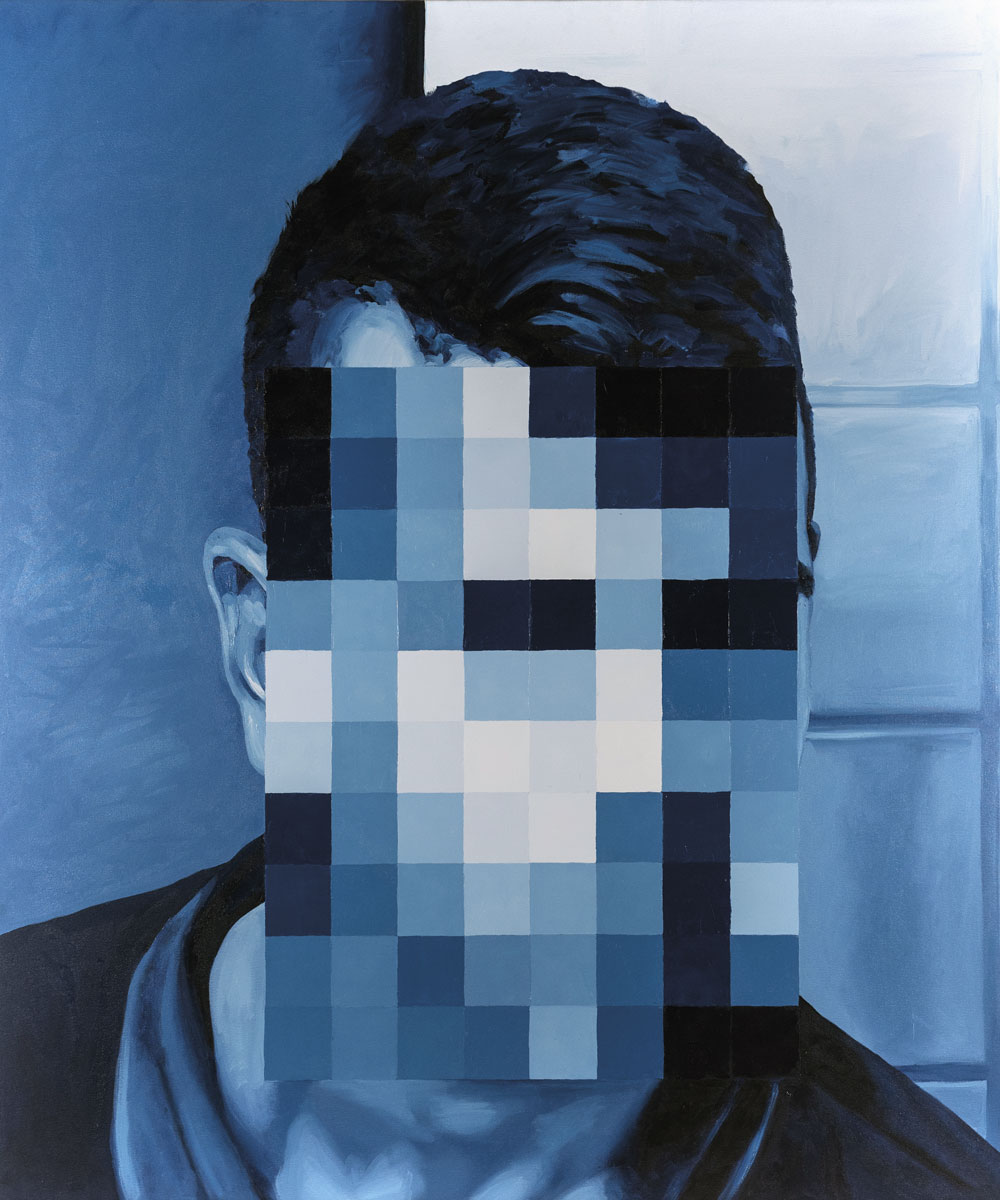 Oliveira takes pains in his work to represent the ‘‘caboclo” – those who are marginalized by society and whose future the State has usurped – in all their complexity. Even if he does not reveal the identity of those portrayed and know them personally, the artist ensures that the image of someone who did not have the right to a dignified life, much less a portrait, is made visible. His paintings did not allocate guilt, but humanize faces destined to become statistics and, in the end, a disposable photograph. ///

Daniela Labra (1974) is a curator of visual arts and art critic.