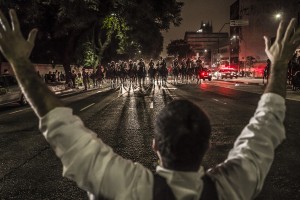 To follow a story on FotoProtestoSP photographers pasting their work at night by Jill Langlois (Brazil) – A protester raises his arms as a cavalry unit of the military police block the Consolação street after heavy clashes nearby during a demonstration organized by the Free Fare Movement, in Sao Paulo, Brazil, on June 13, 2013. Photo by Cauê Ito/Rolê