For the Catalan artist JOAN FONTCUBERTA, the selfie signals a radical change in the concept of photography. Photographs by Martin Parr. 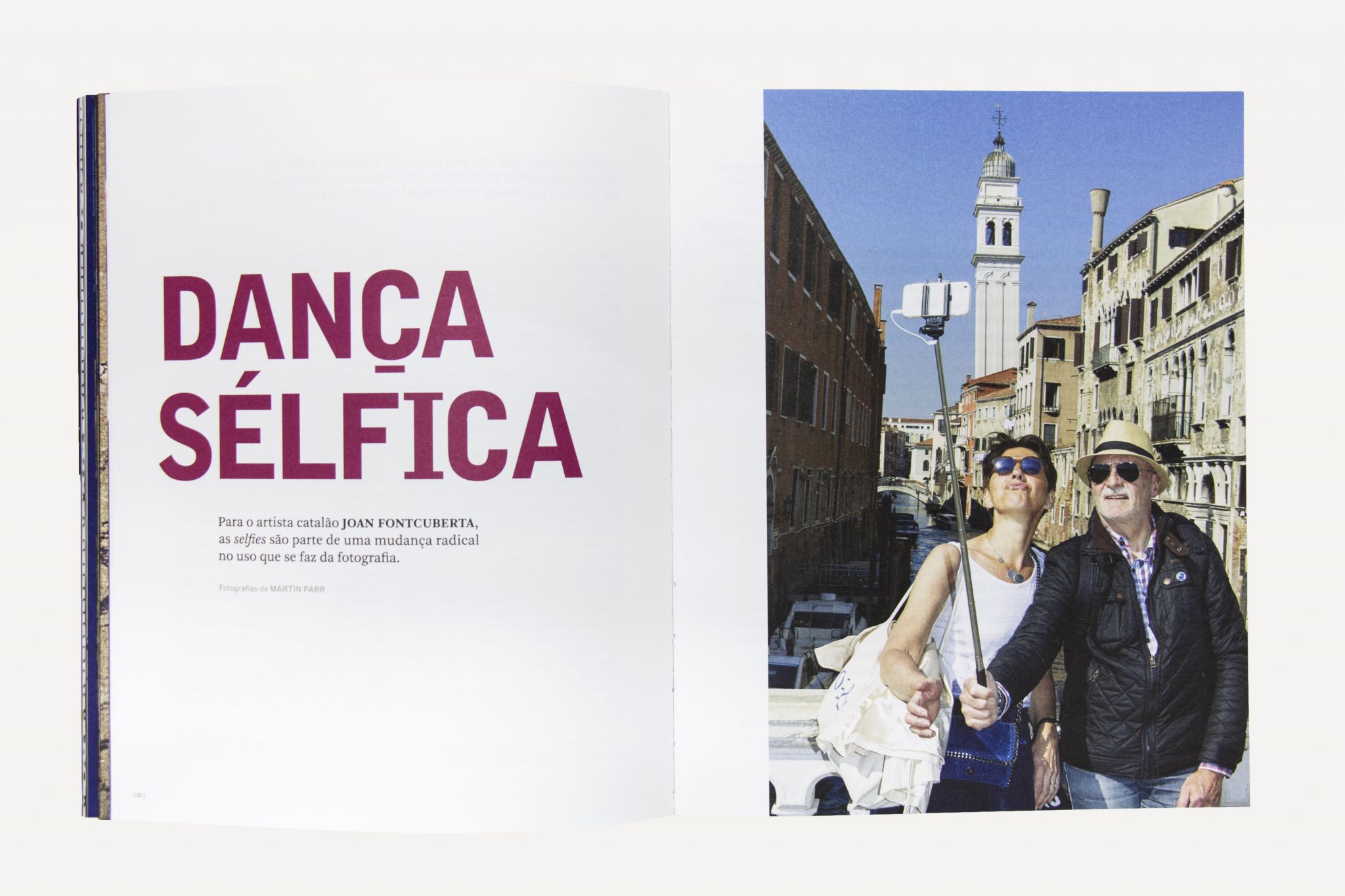 A TV COMMERCIAL for a new Samsung digital camera summed up in 60 seconds a phenomenon essay on the evolution of photography: a young woman is walking into the sea on a deserted beach. Suddenly, she comes upon a corpse rocked by the waves and begins to scream, terrified. But then she pulls out her camera and starts taking photos, using flash. After a few shots, she picks up some strands of seaweed and arranges them by the body, making sure they are within the frame. Still taking pictures, she talks with someone on her cell phone. Then she turns around and takes a selfie with the drowned corpse in the background. The commercial ends with the slogan: “There are so many interesting scenes in life!” Conclusion: we always need to have our camera handy so we don’t miss these unique moments.

This brief story highlights three stages of photographic expression. The first is the impulse to document something, the action which satisfies our curiosity and surprise. We can associate that impulse with the first steps of photography: the need to record and preserve the image of a reality “in the raw”. Then, the young photographer makes an intervention in the scene, and by adding the seaweed, makes it more eloquent. This spontaneous action would demonstrate the desire to interpret the scene, not just witness it, to make the image more explicit and expressive. The young woman oversteps the rules of strict documentary methodology, but this is forgivable because it reveals the first signs of what we might call “staged photography”, or the artistic, and not just instrumental use of the camera. In the first stage, we highlight an event; in the second, an intention. In both cases, we are still in the field of photography. By the third stage, though, we have arrived at post-photography: in a Copernican turn, the camera detaches itself from the eye, moves away from the person controlling it and, at arm’s length, turns around to photograph the photographer. We’ve just invented the selfie.

With the ergonomics of the selfie, reality is not explored with the eye glued to the viewfinder of the camera. The physical and symbolic distance that intervenes – and which is often increased thanks to that ridiculous object, the selfie stick –, that is, the loss of physical contact between the eye and the viewfinder removes from the camera its status as an ocular prosthetic, an orthopaedic device attached to our body. Now there is no proximity: reality appears as an out-ofbody projection, distinct from direct perception, as a processed image on a small digital screen. But it is in epistemological terms that the selfie introduces the most significant change, as it has transformed the ancestral concept of photography from “it happened” to “I was there.”

The selfie replaces the recording of an event by a record of our presence at that event, as a witness. And so documentation is relegated to second place to an autobiographical record. It is a twin record, in both space and time: that is, it exists within both landscape and history. We do not want to show the world so much as to show our presence in that world. 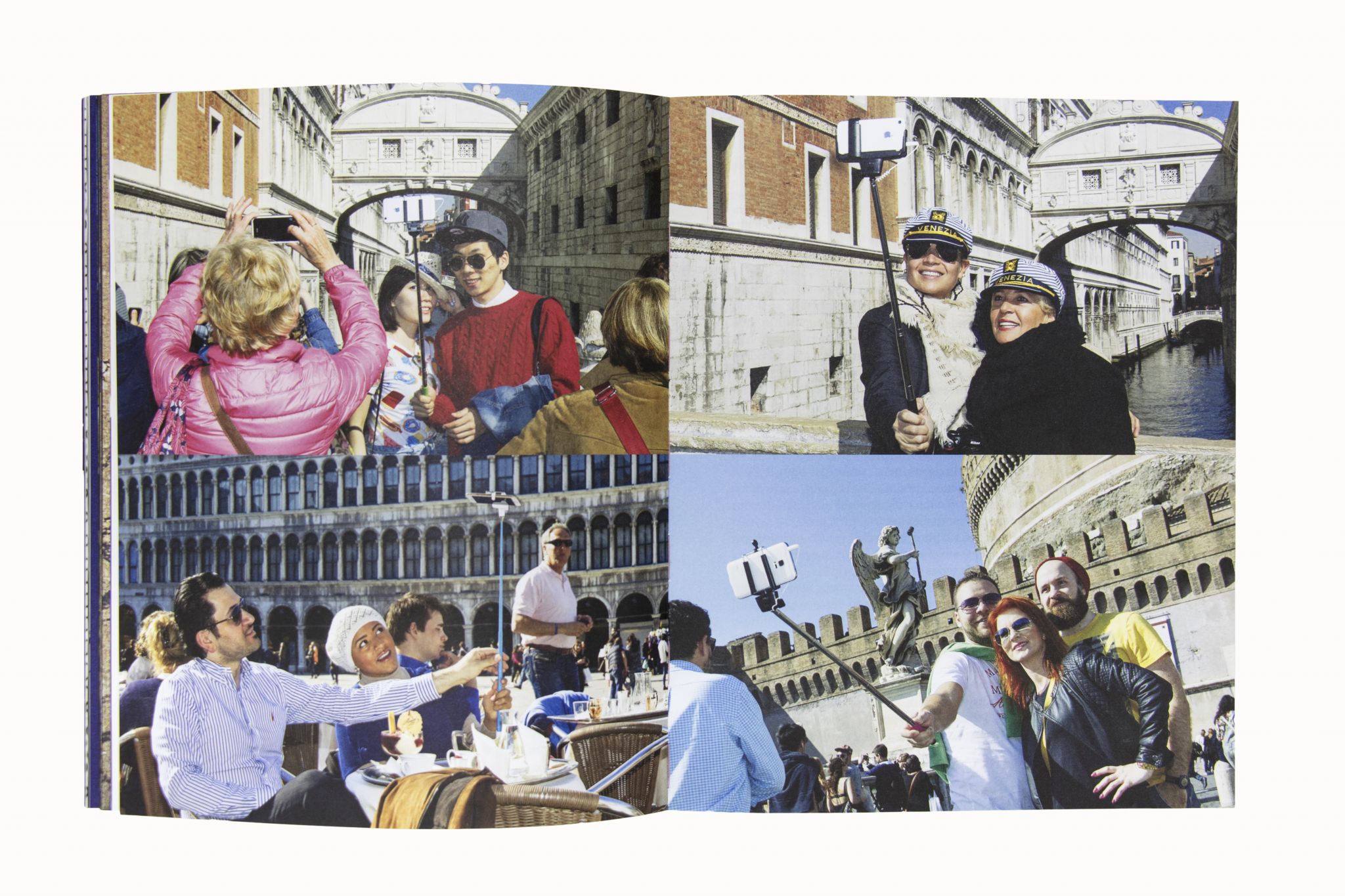 This autobiographical eagerness involves the insertion of the self into the visual story with such an outburst of subjectivity that it sets off, psychologically speaking, an explosive eruption of narcissism. Aesthetically, it discards the documentary canon inherent until now in vernacular photography. And one is left to ask if the selfie is the expression of a vain or egocentric society. The answer is “not necessarily.” In fact, although the internet functions as a massive loudspeaker, proclaiming narcissism – as for so many other things –, the affirmation of self and vanity have been constant throughout the history of humanity. The selfie has its precedents in the history of photography but, as the science writer Jennifer Ouellette says: in the digital era they function as “feeling regulators”, which keep feeding our psychological need to expand our understanding of ourselves. The big difference is that this understanding is, on one hand, within the reach of everyone and, on the other, it is amplified through the sounding board of the social networks and messaging apps.

The internet creates a particular way for us to confront our changeable identity condition. In the past, identity was subjected to the word, the name given to characterize the individual. The emergence of photography gave the image the role of recording identity, on the reflected and registered face. With the advent of post-photography, the time has come for the speculative masked ball, where we can all invent how we want to be. For the first time in history we are masters of our appearance, and we can now manage that appearance as best suits us. Portraits, above all the self-portrait, multiply and spread on the internet, expressing both a narcissist and exhibitionist impulse, which is also tending to dissolve the membrane which separates the public from the private.

In the “digital swarm” (a term coined by the South Korean philosopher Byung-Chul Han to refer to the social space of the internet), we interact through an infinite network of connections where we shape the identity to those connections. In this digital swarm, the selfie phenomenon is a significant symptom which claims the supremacy of narcissism over recognition of the other: it is the triumph of ego over Eros. But its overwhelming eruption upon post-photography practices should be read based on how we manage the impact we wish to have on the others. Let us not forget that, for the first time in history, this management does not depend on the makers of images distant from us, be they artists or professional photographers, but rests in our hands. Thus this management also entails a moral or political meaning, as well as the responsibility which is intrinsic to this ability.

It is true that in the most common selfies, playfulness and self-exploration prevail over memory. Basically, what we require of photographs nowadays is that they can be shared and adapted to the dynamics of the conversation. Taking photos and displaying them on social networks is part of the game of seduction and the rituals of communication of post-photography subcultures from which, although championed by young people and adolescents, almost nobody gets left out. These photos are no longer memories to be saved but messages to send and exchange; photographs are transformed into pure acts of communication, whose pandemic scale obeys a broad spectrum of motives. They may be practical, celebratory, formal, introspective, erotic, pornographic… and even politically transgressive. For the digital ethnographer Edgar Gómez Cruz, this repertoire pivots around four axes: identity games, narratives of the self, selfportraits as therapy, and photographic experiments. It would be necessary to add that nowadays many photographs are not taken to be seen. Shooting a picture has become something that goes beyond their original intent (representation, witnessing, memory, etc.) to become something inseparable from life itself, somewhere on the forefront between vice and pleasure. The act of photography itself can prevail over the content of the photograph. 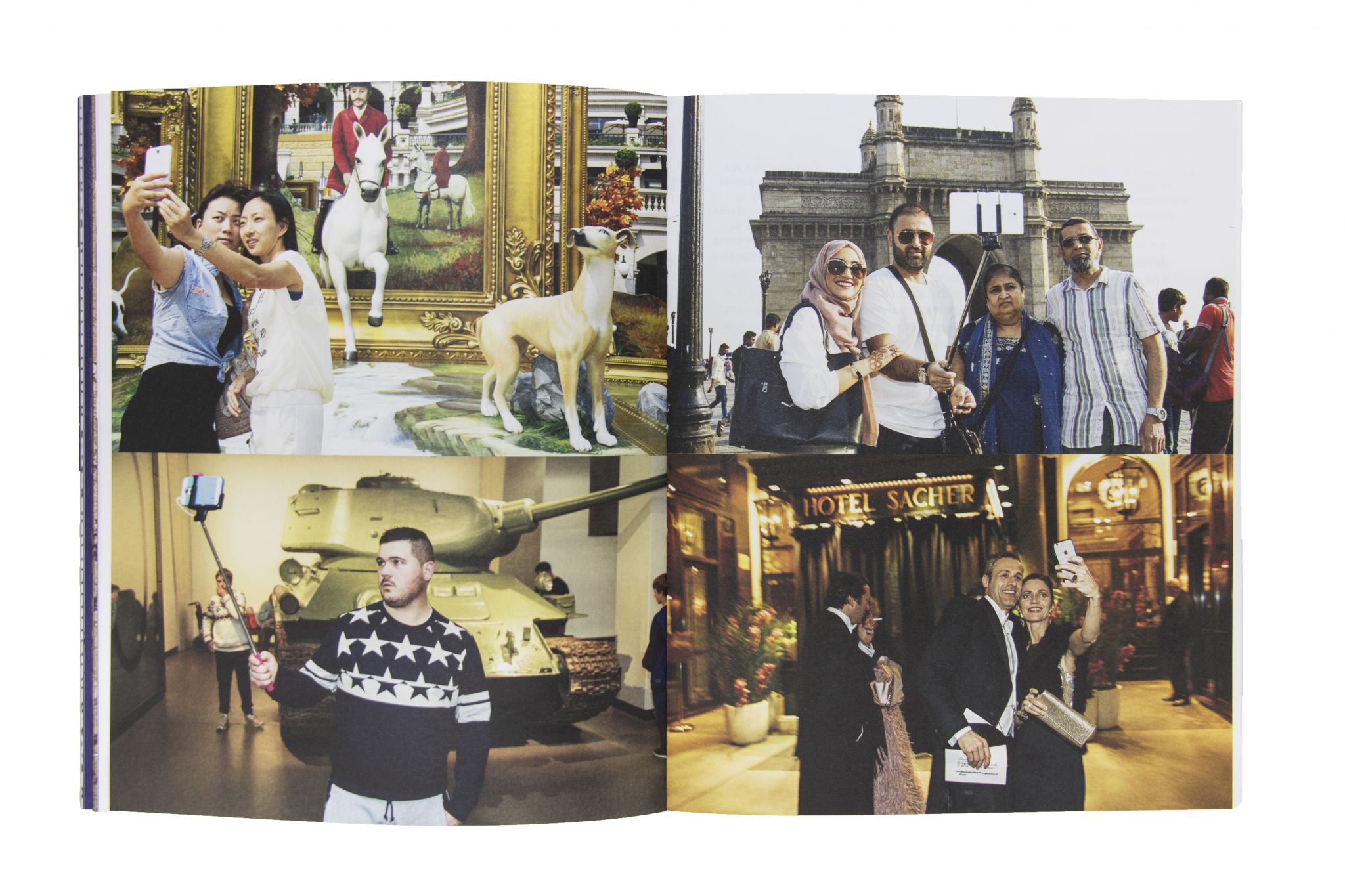 Technically, in the massive production of selfies, there are two different main lines of action, which may be defined by the neologisms “selfphoto” and “reflectogram”. For the first, all that is necessary is a wide-angle lens and an arm long enough to fit the subject in the frame by trial and error, because, although some phones have cameras on both sides – a concession to selfie mania –, it is normal to have to shoot the photo blind. With the reflectogram, however, we take the photo in front of a mirror which, despite always involving a certain randomness, allows for greater control. Without doubt, this advantage explains why the reflectogram preceded the selfphoto, both at the time of analogue photography and with the digital imagination. From the perspective of photographic culture, the simultaneous presence of the camera and the mirror in the reflectogram have significant implications in both ontological and symbolic terms.

Analog photography has been considered a discipline of the elves – beings from Scandinavian mythology best known for their beauty and immortality. These two gifts have helped to define the photographic horizon: truth and aesthetics, time and memory. If I am allowed to conclude with a play on paronyms, I would say that, if the photograph was elvish, the post-picture has been selfish. And this dimension is not a fad, but a consolidation of a genre of images that have come to stay – the passport photograph, the wedding photograph or the tourist’s snap. Although this diagnosis may displease, selfies are the raw material that helps us to understand and to correct ourselves. And to that we will not know how to give up. ///

+
The Fury of the Images. Notes on Postphotography (Galaxia Gutenberg, 2016)

Joan Fontcuberta (1955) is a Spanish artist, teacher, historian and curator. He is a recipient of the Hasselblad Foundation International Award in Photography and the National Photography, and National Essay awards.

Martin Parr (1952) is a photographer and is currently president of Magnum Photos, of which he has been a member since 1994.