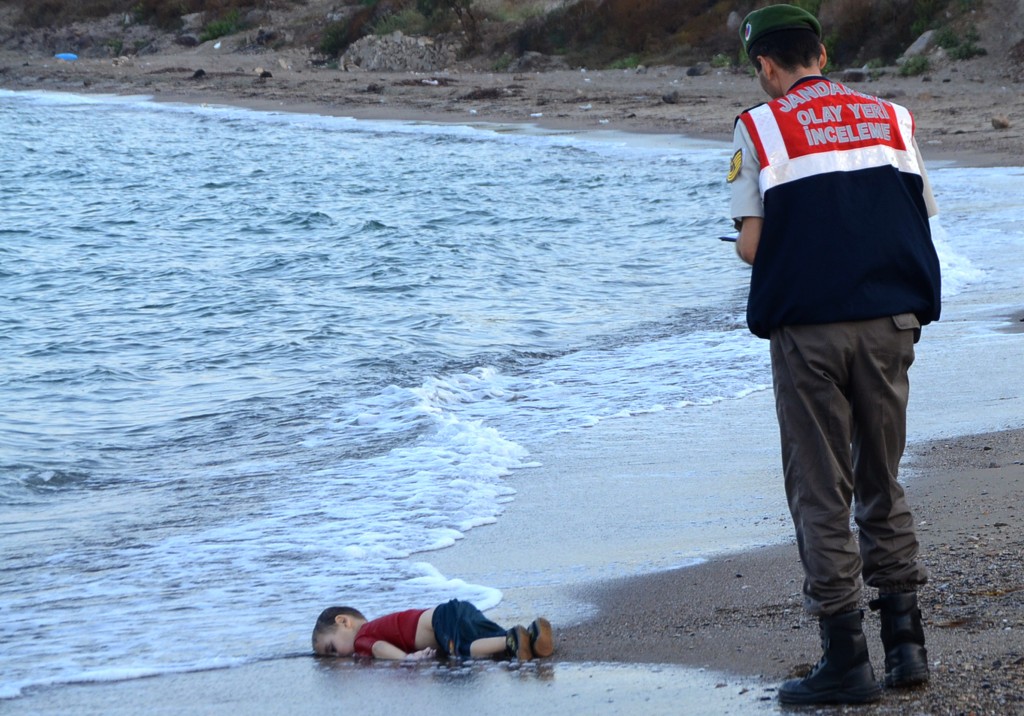 A little boy lies face down on the beach, as if sleeping. He is dressed in a red shirt, blue pants, and sneakers, and his hair is neatly combed. He looks peaceful. Someone should wake him, before the sun burns his skin and the cold waves reach him.

This image began appearing on Twitter and Facebook and other social media Wednesday morning and quickly went viral. Further information about the image was slow to come. The boy was Kurdish, from Syria. His name was Aylan Kurdi. His father and mother were fleeing their home in Kobane, and the ISIS fascists there. They paid someone $2300 apiece to let them get into a small rubber boat to cross from the resort town of Bodrum on the Turkish coast to the Greek Island of Kos, three miles away, where they planned to head north, and eventually get to Canada. The boat was overloaded, the Aegean Sea was rough, and the paid pilot was incompetent and cowardly. The boat capsized, throwing all 17 on board into the sea, where at least 12, all Syrians, drowned, including three-year-old Aylan, his five-year-old brother Galib, and their mother, Rehan, who tried to hold Aylan up. Only their father survived, bereft, to carry their bodies back to Kobane.

This little boy is the latest of the more than 2500 refugees who have died trying to reach Europe this year, many of them children. Most of these have drowned in the Mediterranean, but at least 85 have drowned in the Aegean, mostly at night. Aylan’s tender, lifeless body lying on the sand as if asleep quickly became an inescapable symbol of the human tragedy of the current refugee crisis. This massive crisis, involving hundreds of thousands of people, was suddenly condensed into the body of one little boy on a beach. He looks like he is trying to hear the sea speak, to tell him why this awful thing has happened.

The incongruity of his innocence and the brutality of the circumstances of his death makes the image impossible to forget. How in the world did we get to this point?

The image was often accompanied on Twitter by the Turkish hashtag #KiyiyaVuranInsanlik, or “Humanity Washed Up Onshore.” To many of the xenophobes in Europe who have loudly decried the migration, the latest surge of refugees was described as “a sea,” or “a tide,” washing up on the shores of Europe, carrying disease and poverty with it. Suddenly the surge had a different look—the body of an innocent child, swept up by history. Perhaps this will turn the tide.

Some people objected to the distribution of this image online and in print, claiming that it was done for the wrong reasons, and that it was exploiting the sentiments of viewers. This is the charge that has always been leveled at documentary images of difficult subjects. But this image will have an affect, and it could actually change things. It already seems to have had an affect on David Cameron.

One of the first political figures to respond was the President of Turkey, Recep Tayyip Erdogan. “The European nations that have turned the Mediterranean into a grave for immigrants share the sin for each immigrant’s death,” he said. “It is not only immigrants who are drowning in the Mediterranean, it is also humanity.” This from the man who has turned a blind eye on the atrocities of ISIS against Alan Kurdi’s family and many others like them in Northern Syria, especially the Kurds, and has resumed his unilateral war on the Kurds to gain political advantage as he struggles to retain political power.

The photographer who took this picture, Nilufer Demir, from Turkey’s Dogan News Agency, almost certainly did not realize the symbolic importance of the image when she took it. It is one of those images that seems to arise from out of the collective unconscious. Comparisons have already been made to Nick Ut’s 1972 image of a young Vietnamese girl running naked from a napalm attack, which is credited with helping to shift world public opinion against the war in Vietnam. One also cannot help but compare it to the image of Michael Brown’s body, lying face down in the street for hours, which fueled uprisings against police violence in Ferguson, Missouri last year and ignited the Black Lives Matter movement.

The image of the death of Aylan Kurdi is a simple image, really, but it will not go away for a very long time.///

David Levi Strauss (1953) is an essayist and photography critic, author of Words Not Spent Today Buy Smaller Images Tomorrow: Essays on the Present and Future of Photography (2014), From Head to Hand: Art and the Manual (2010), and Between the Eyes: Essays on Photography and Politics (2003), among others.