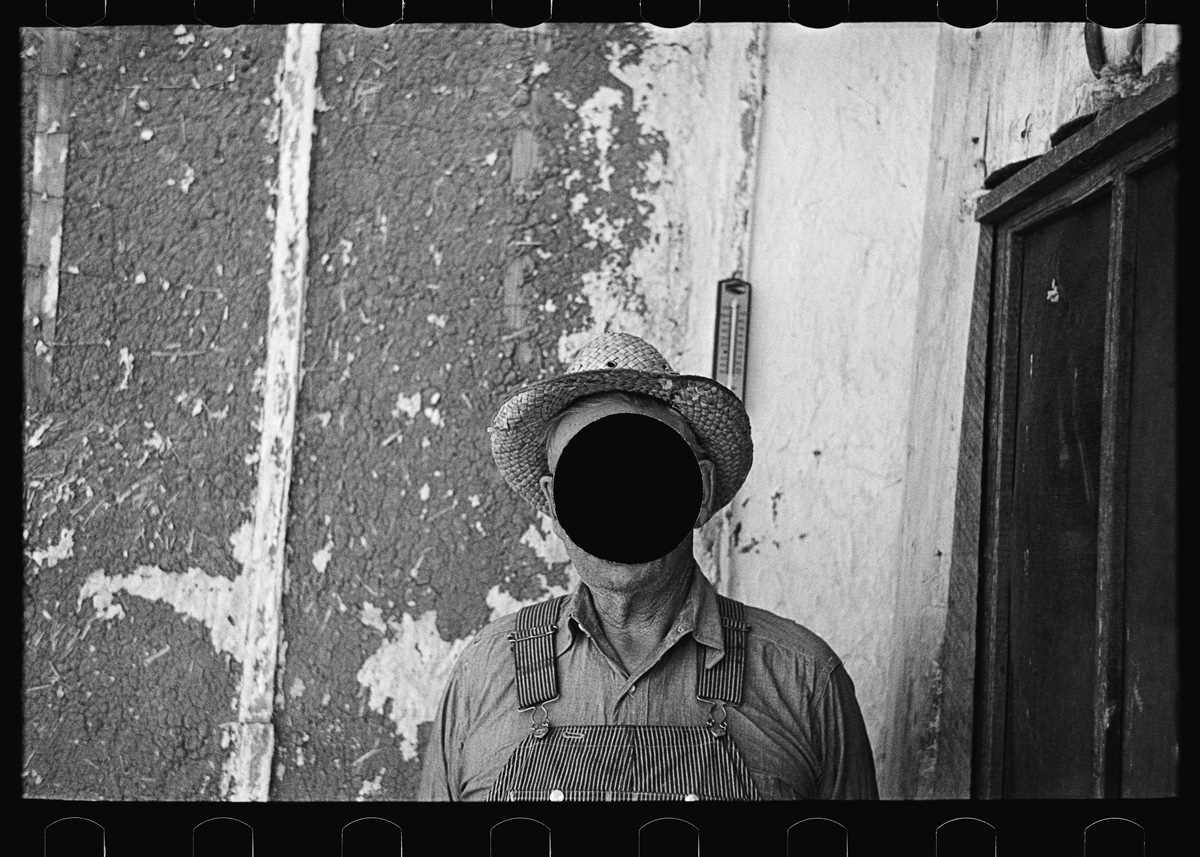 When thinking of American documentary photography of the 1930s, images such as Dorothea Lange’s Migrant Mother (1936) or Walker Evans’s portrait of Allie Mae Burroughs titled Alabama Tenant Farmer Wife (1936) immediately come to mind. Symbols of the migrant workers’ struggle during the Great Depression in America, the two works represent a crucial moment for modern photojournalism, influencing the way we relate to events happening elsewhere. Through emotional and visual appeal, these images – which were commissioned by the FSA (Farm Security Administration) – acquainted the American public with parts of the country they knew nothing about, giving faces to these places and the struggles endured by its people.

Created by Frank Delano Roosevelt’s government under the Department of Agricul- ture, the FSA (1937-46) was a New Deal agency that aimed to assist families struggling with both the effects of the Great Depression and natural disasters, such as the 1930s Dust Bowl and floods. The project, on a first stage, documented cash loans made to individual farmers and community relocation projects, while its second stage aimed at recording the lives of sharecroppers and the migratory agricultural workers.

The FSA, however, is less known by these aid efforts and more by its Information Division, a largely government-sponsored initiative. At the head of this division was Roy Emerson Stryker (1893-1975), an economist, government official and photography enthusiast. He set out to create an extensive photojournalistic project that depicted the impact of these new government policies on the farmers across rural America, particularly in the South, Midwest and West. The images would serve to both present the wider public with an insight on the success of the FSA’s efforts and to accompany financial reports to Washington, attesting to Roosevelt and his administration that the operation was fruitful. At the time, photography was viewed as an unmediated and neutral document of reality, used extensively in printed media to illustrate news articles, sometimes even overpowering the text, particularly in magazines such as Life and Look. 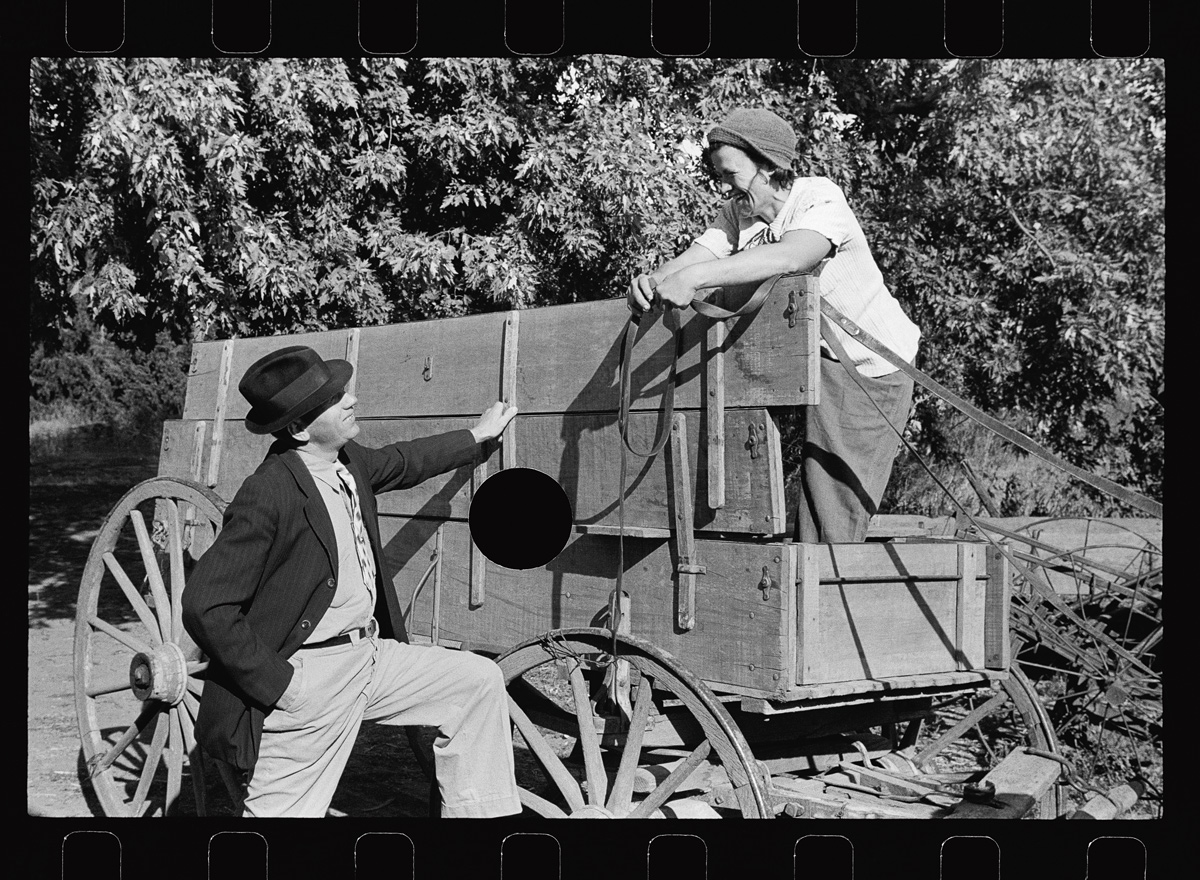 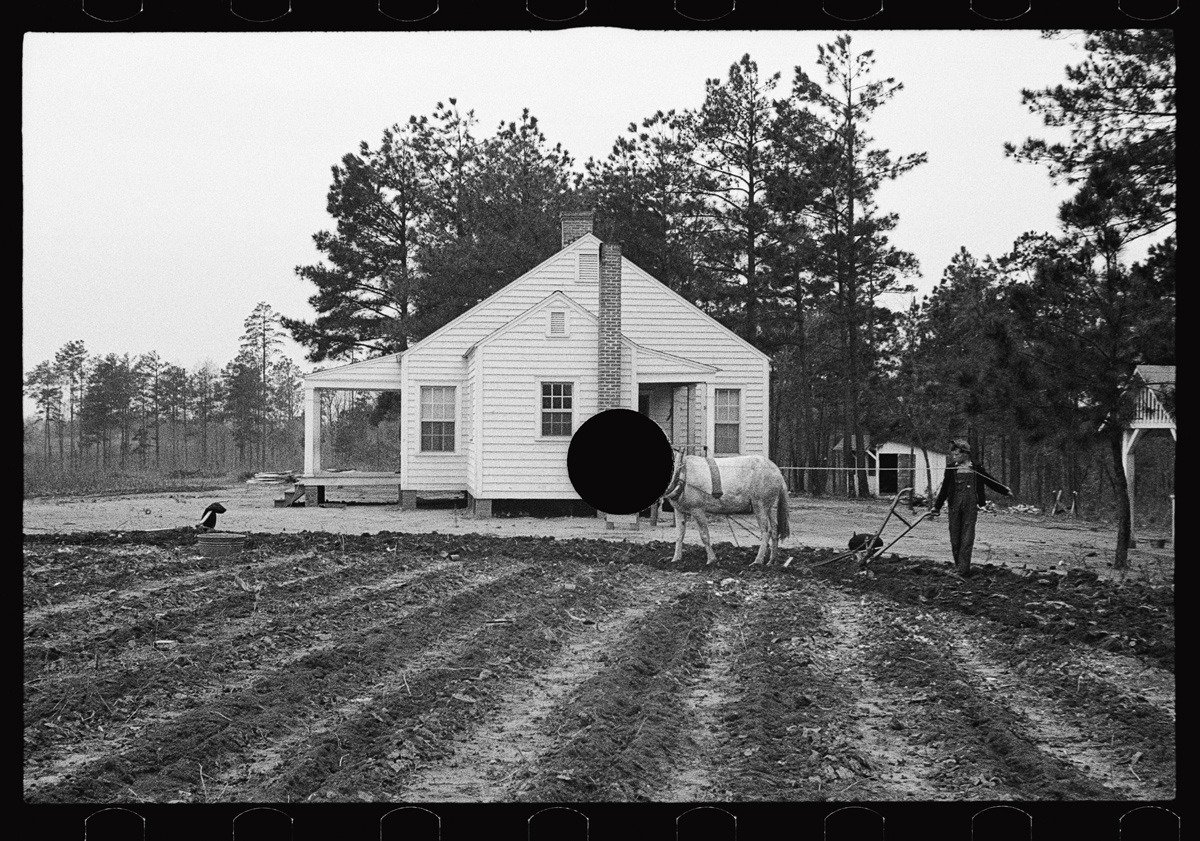 Most of the material related to this commission is held at the Library of Congress, Washington D.C., and is considered public domain, accessible online to all. The collection boosts photographic prints, approximately 175,000 negatives, and written records, besides thousands of images surprisingly marked by a black disc: a hole in the negative, made by a metal punch. This discovery culminated in the exhibition Killed Negatives: Unseen Images of 1930s America, which Nayia Yiakoumaki, curator at Whitechapel Gallery in London, and I organized in 2018.

As part of their editing process, photographers, when working analogic, tend to cross unwanted images on the contact sheets created from negatives. However, what we see in these images is the “killing” of the original negative, rendering it unusable in its primary form, through the violent use of a hole punch. While some negatives were merely stamped around the edges, others had their subjects’ faces, bodies and surroundings destroyed. This action went beyond selection or edition: it shows a very ferocious approach to censorship. The captions that accompany the negatives record this process – all frames punctured were recorded on paper simply with their serial number and the word “killed.”

From his office in Washington D.C., Stryker controlled all the departmental operations: from supplying photographers with equipment, travel funds and briefs to receiving, developing, editing and distributing all the images produced. A document titled “The F.S.A. photographer,” which can be found in the Library of Congress archive, outlines the profile that one had to have to be part of the project. The photographer had to be “more than an artist, more than an adequate mechanic. He must be something of a sociologist, something of an economist; […] and more than anything else, he must have a basic understanding for the meaning of his story.” It also mentioned that they should do good amounts of reading, not only press, but also books that could enhance their work further. 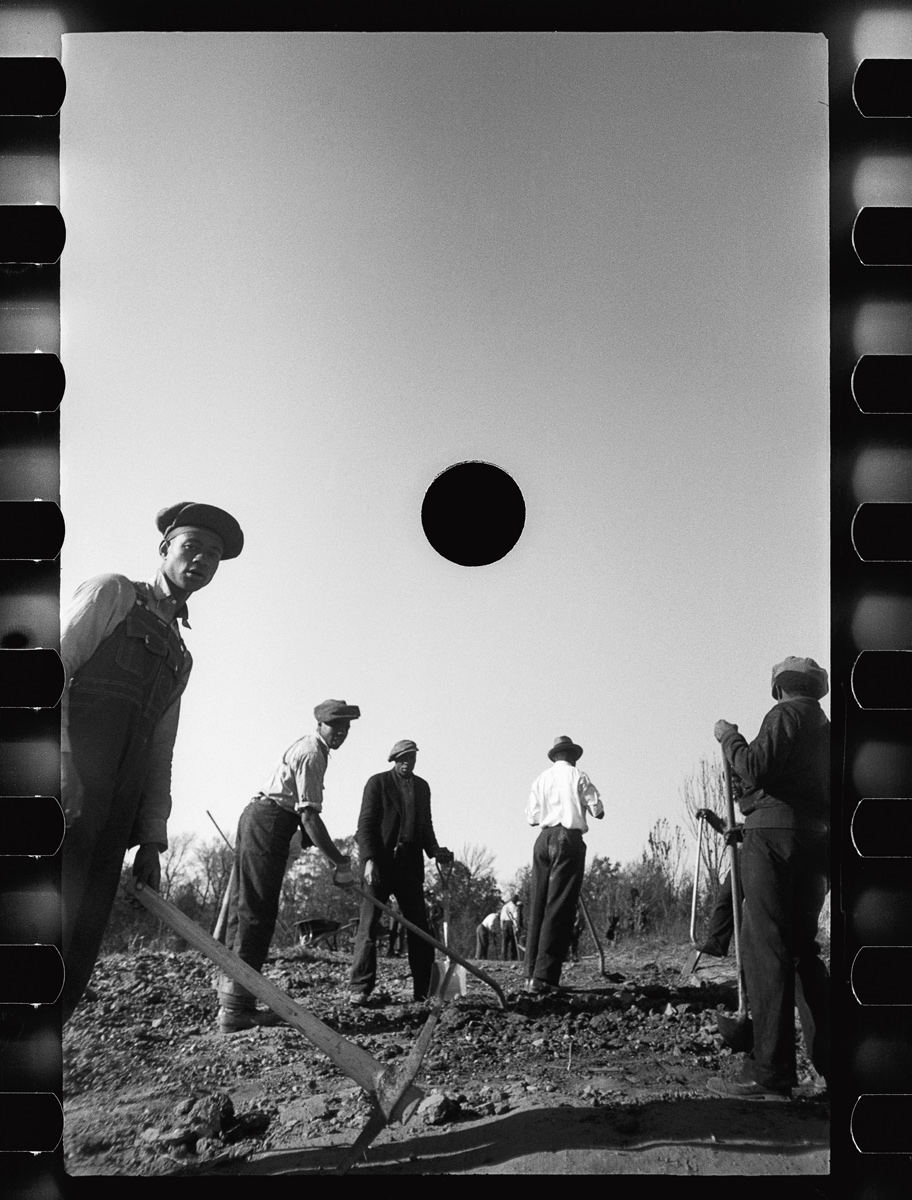 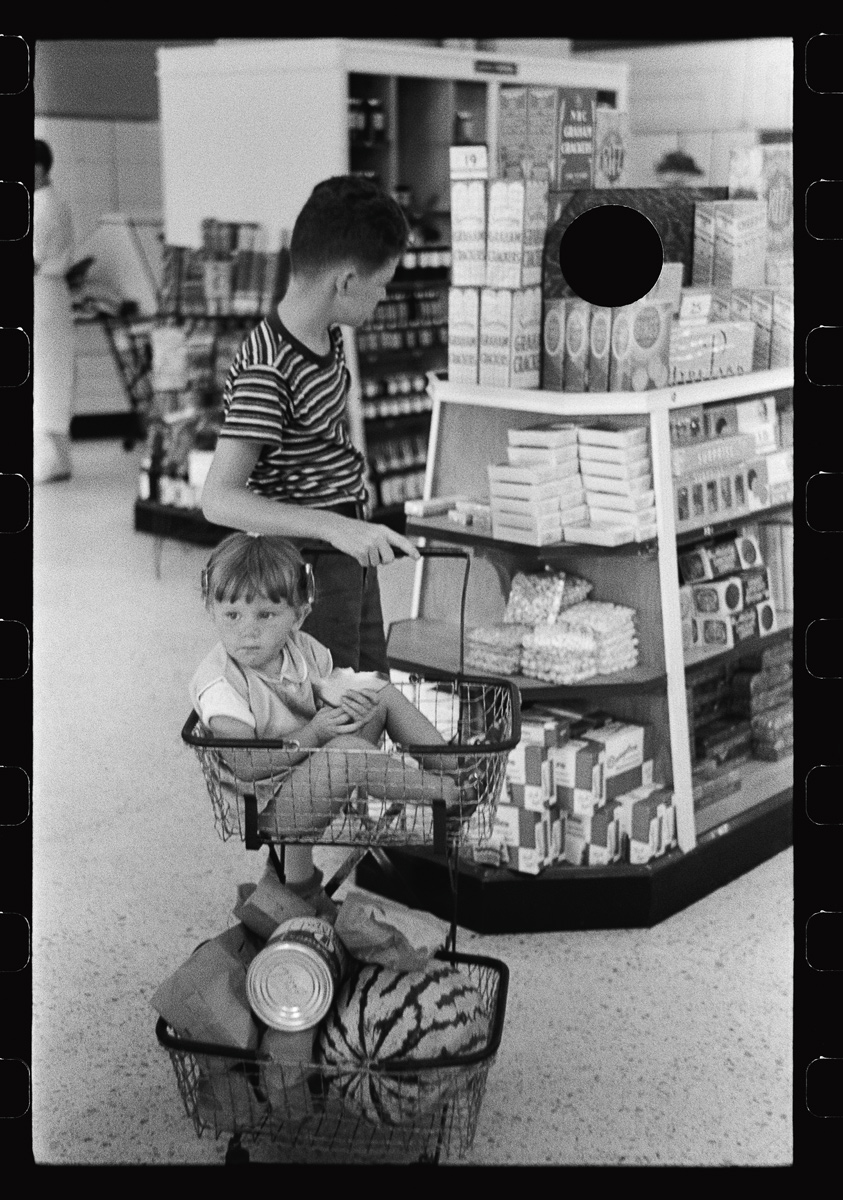 Stryker employed Paul Carter, Jack Delano, Walker Evans, Theodor Jung, Dorothea Lange, Russell Lee, Edwin Locke, Carl Mydans, Arthur Rothstein, Ben Shahn, John Vachon, and Marion Post Wolcott, among others. They were sent to various locations in the USA, provided with cameras, film and shooting scripts that outlined the aims of each of the photographers’ trips and indicated specific subjects to be photographed.

The first instruction was to shoot either the farm or the farmer in a desperate situation, purposely showing poverty through capturing “run down buildings” or “poor clothes.” The next photos should tell a success story, depicting scenarios of farmers interacting with FSA agents and receiving loans until they finished with a clear successful moment, such as “Back on farm – saved – relieved and happy.” Some photographers were, in addition, provided with briefs on specific people to photograph, most of whom had already some relation with the re-habilitation program. Others focused on specific themes. Marion Post Wolcott, for example, has a significant amount of cityscapes and scenes with industry workers in action, while Paul Carter focused more in rural landscapes. Almost all of them sign photos showing theatrically staged interactions between farmers and FSA agents, as it is the case of John Vachon’s Untitled photo, possibly related to “County supervisor talking with FSA client, Coffey County, Kansas, October 1938.” 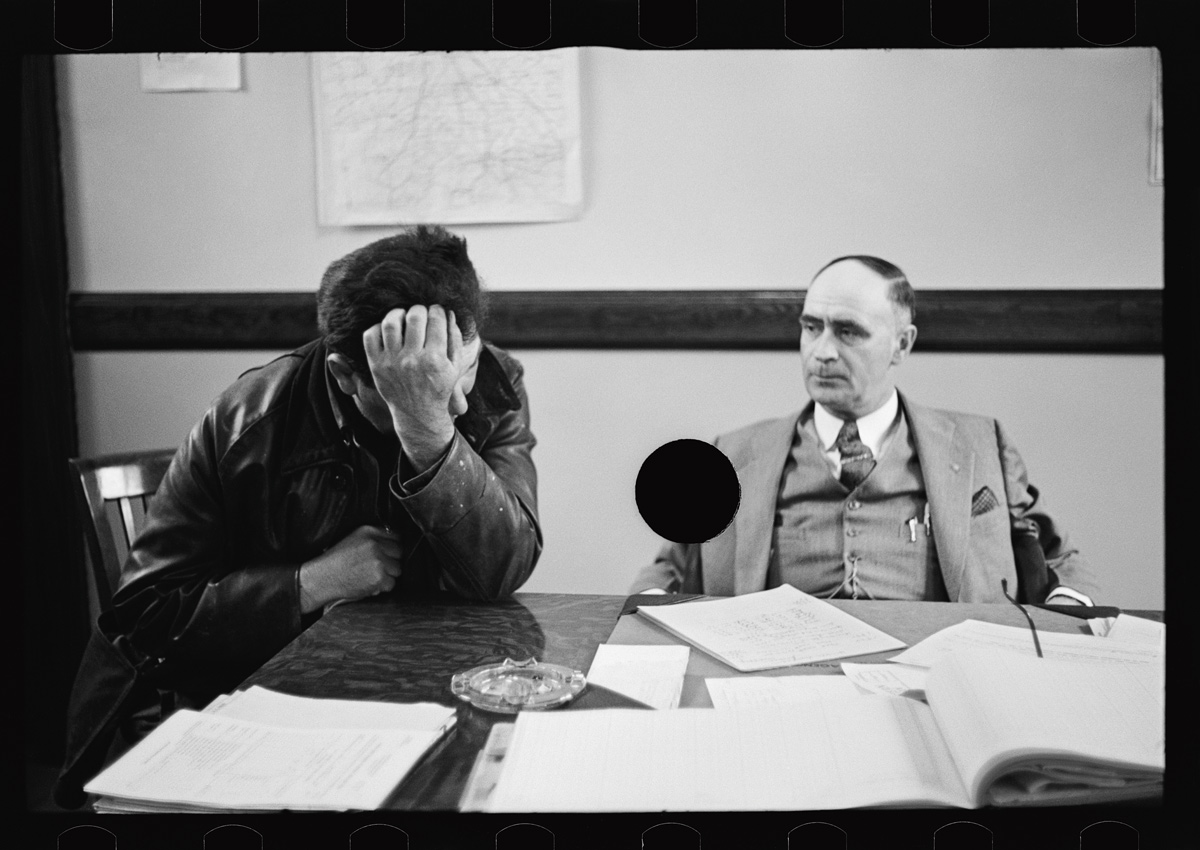 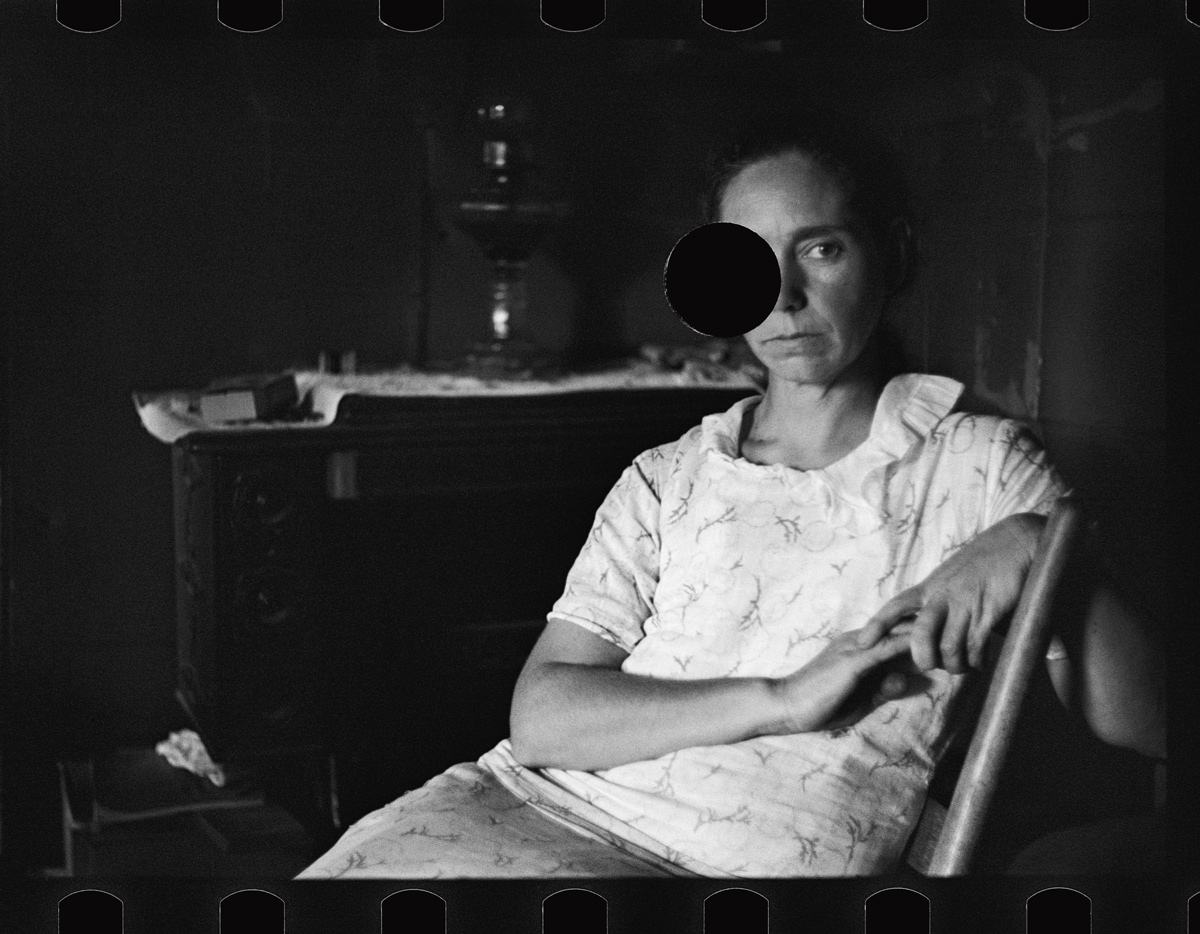 These strict guidelines and preconceptions set by the FSA were augmented by Stryker’s violent editing method, which created tensions between him and the majority of the photographers. Stryker was in constant contact with all the members of his team, offering advice and tough criticism to ensure the agency’s objectives were met. In one of his letters to Jung, he shows much concern over receiving similar and out of focus photographs. In another letter, Stryker states he is “very disappointed in the pictures received from you [Jung] to date,” to the point of asking him if he understood how to use his Leica. Lange had similar troubles, which led her to withhold, refuse or delay sending her negatives to Washington D.C. None of the “killed” Lange’s negatives were found. She used to shoot in average or large formats, and we only found 35mm punctured negatives.

Looking at both Ben Shahn’s papers, held in the Archives of American Art of the Smithsonian Institution, Washington D.C., and Walker Evans’ archive, housed in the Metropolitan Museum of Art, New York, it is clear that the majority of the photographers, similarly to Lange, were reluctant to send in their negatives and tried to keep them until their return to the FSA offices. Stryker opposed this, using the delays on the turnaround of the images and the money spent on processing facilities in D.C. as arguments to demand the negatives were sent rapidly. The editor required quick results and constant contact with the program.

Evan’s relationship with Stryker was also an uneasy one. The photographer often disagreed on quantity of production and the lack of autonomy, which led to his dismissal in 1937. This rigorousness applied to all photographers, regardless of how established their careers were, leaving them with no editorial say. Only Edwin Locke, Stryker’s assistant at the time, and Russell Lee had positive relationships with Stryker, and continued to work with him after the project ended.

It seems that there were no specific criteria used for Stryker’s ruthless method of editing. Some of these photographs have technical problems, are out of focus or badly exposed, such as Arthur Rothstein’s Untitled photo, possibly related to “Sharecropper’s wife and children, Arkansas, August 1935,” where a camera advancement malfunction happened, preventing the film from being exposed in even frames, or in the overexposed and out of focus Theodor Jung’s Untitled photo, possibly related to “Rehabilitation client, Garrett County, Maryland, September 1935.” However, many of the images are very powerful and have nothing wrong with their technique. 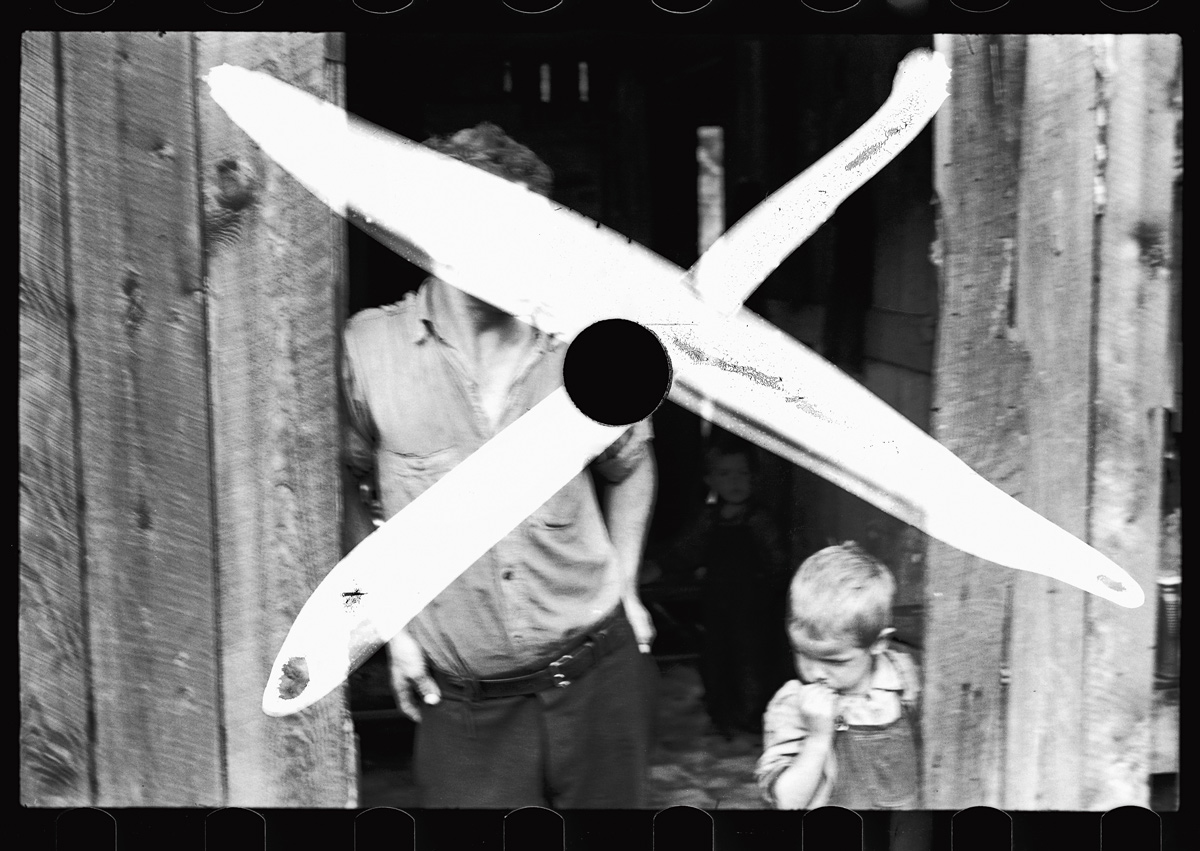 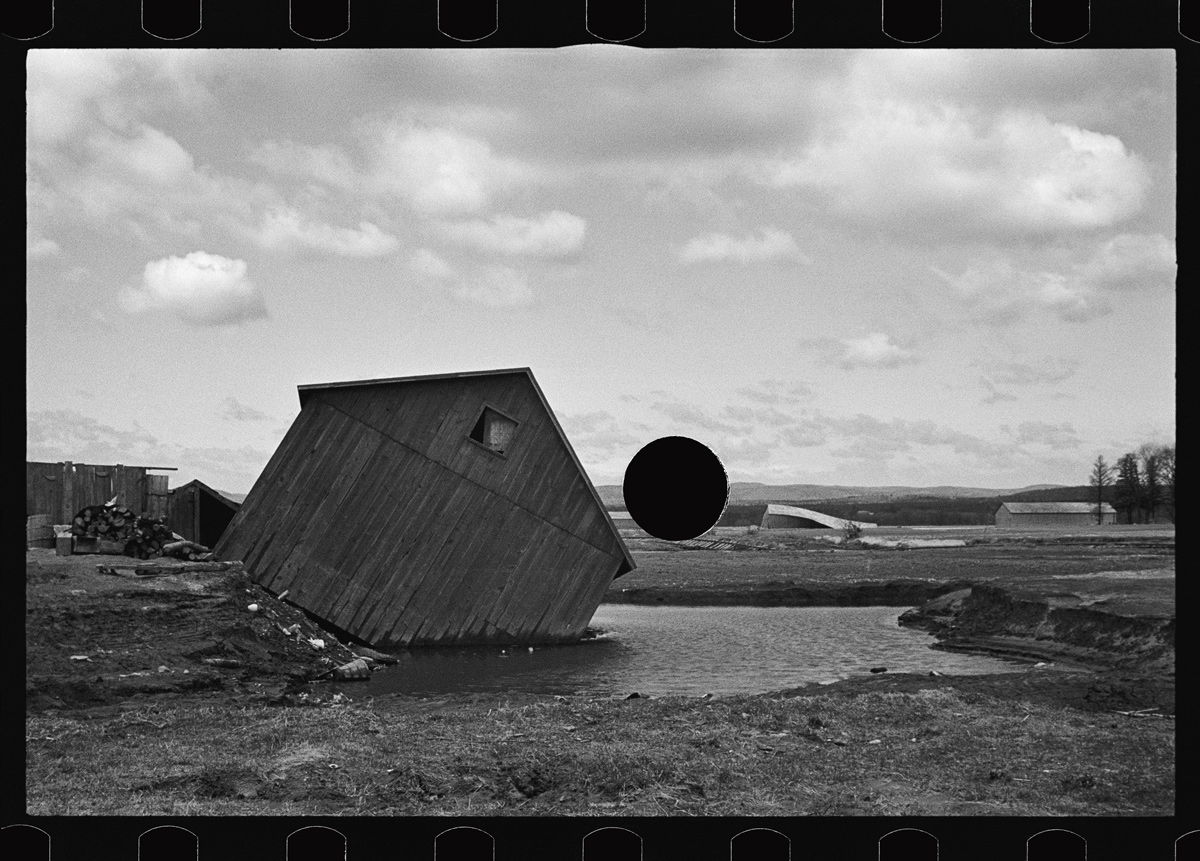 Perhaps there were too many shots of the same subject? Perhaps they weren’t fitting of the FSA’s political agenda? Did the photographer show too much bias, too much of a personal standing? Or was Stryker simply afraid that these images would fall on the wrong hands and re-purposed for an anti-governmental agenda? It can only be speculated, although one thing seems certain: if deemed unfitting by Stryker and his assistants, whichever the reasoning was, these pictures would have to be damaged in such a way that wouldn’t allow them to be used.

Another key aspect of this archive is the descriptions that accompany the photographs. Most of the “killed” negatives are untitled as they were not put to use or published anywhere. They were, however, categorized in relation to other images, either by similarity or position within the filmstrip. These captions offer an insight of the location where the photograph was taken and – perhaps more importantly – of particular observations noted by the photographer. Descriptions such as “Healthy children in clean backyard, Washington, D.C.” or “Rehabilitation client worrying over his accounts, Jackson County, Ohio,” contribute greatly for the understanding of Stryker’s determination in capturing very specific scenarios of America. The editor believed images were not strong enough on their own, as they wouldn’t offer enough contextualization to the viewer. The link between image and text was key for these images to be assimilated exactly as they were intended to: highlighting the transformation of the lives of American farmers – and, consequently, the country’s economy – through governmental aid and effort.

These “killed” negatives shed light on the extent of control and censorship of a project that according to Stryker deemed to “introduce America to Americans.” This manipulated vision of rural America during the depression, in a pivotal moment of photojournalism, serves as a reminder of how biased our interpretation of historical knowledge can be. From the outset, the photographers were brought in to a structured propagandistic project, characterized by Stryker’s firm and focused selection and captioning. He did, however, leave a fascinating pictorial archive behind that, despite the violence it incurred, can now also be seen as a collection of beautiful and strangely surrealist images. ///

+ The FSA archive is available for viewing on the Library of Congress website: http://www.loc.gov/ pictures/collection/fsa/.

Inês Costa is na assistant curator at the Whitechapel Gallery in London, UK