Amidst the urban squalor that permeated the city of São Paulo in the 1980s, the photographer and filmmaker A. C. D’ÁVILA documented the everyday life at Estação da Luz, a railway station built in the 19th century in the neighbourhood of Luz [“light”, in Portuguese] in São Paulo, which symbolises the splendour of the old coffee economy. 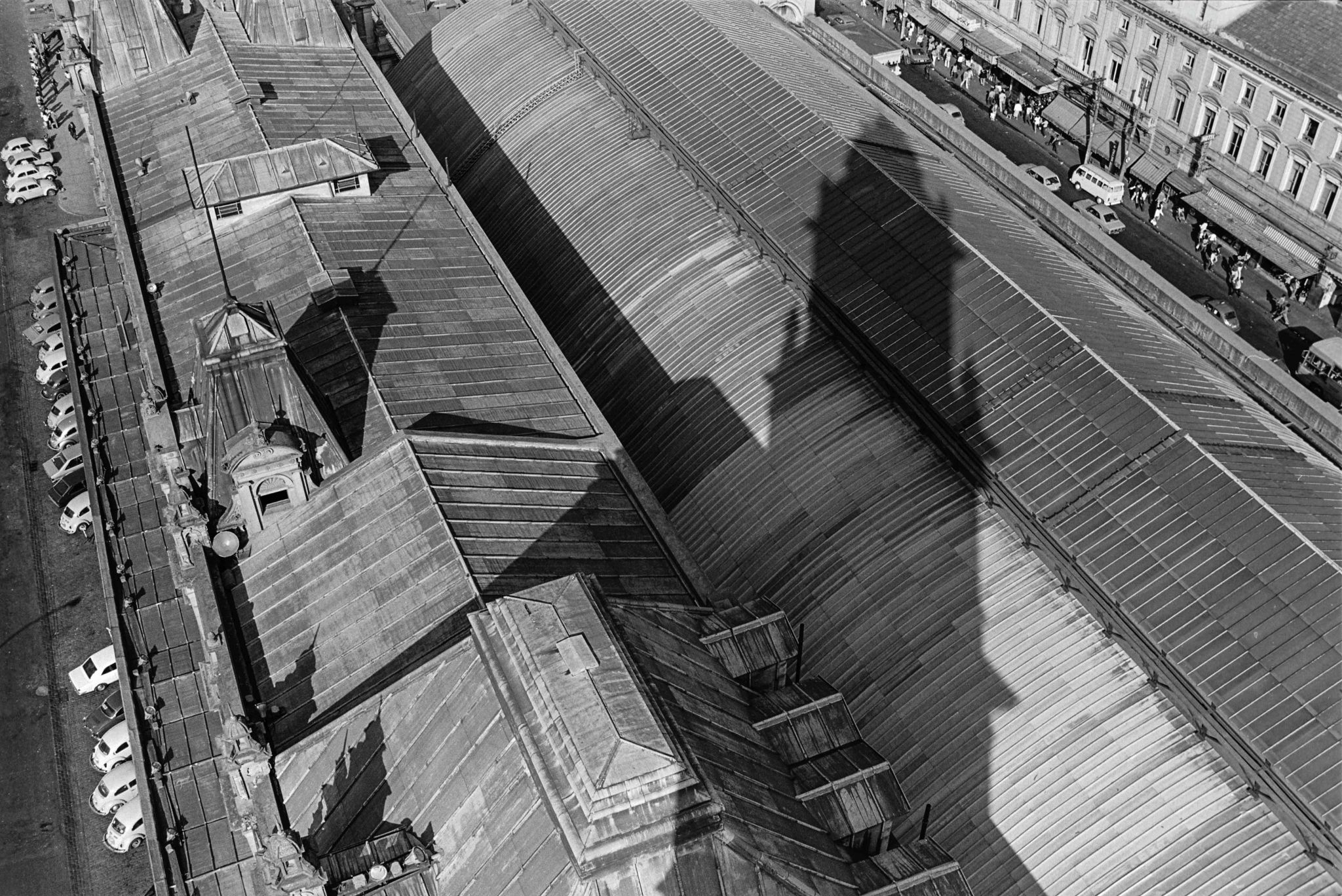 This photographic essay by A. C. D’Ávila (as he preferred to be called) stemmed from an invitation by the Commission of Photography and Applied Arts of the Secretary of State for Culture in São Paulo. In the words of the commission’s president at the time, the historian Boris Kossoy, the commission was created to “research, document and disseminate, via photographic testimony, the civilization of São Paulo in its social, economic, political and cultural developments, in the hope that such a proposal would generate a global vision of the territorial occupation within that state.”

D’Ávila started to photograph in the early 1970s, while he was still an undergraduate student at the School of Communications and Arts of the University of São Paulo [ECA-USP], where he showed a strong liking for urban documentation from the very beginning. As from the 1980s, he directed his interests towards ecological issues, documenting several Brazilian regions such as the Amazon, the Jureia Conservation Area, the Pantanal area in the state of Mato Grosso and Ilha do Cardoso. His expeditions to the Northern region of Brazil supplied the material for his 1995 PhD thesis, entitled Fotógrafo Viajante: Amazônia [Travelling photographer: the Amazon]. He also travelled through other countries in South America, such as Argentina, Chile, Peru, and Bolivia, later heading to the South Pole, the southernmost point of the planet. In 1986 and 1988, he travelled on board of the oceanographic ship “Professor W. Besnard”, belonging to the University of São Paulo.

A. C. D’Ávila was one of the first Brazilian photographers to obtain an MA and a PhD, and to reflect systematically on the nature of photography. He taught at ECA from 1982 until his death in 1997, and also ran open access courses at the Lasar Segall Museum in the period when the photography department was directed by Clóvis Loureiro and Luiz Paulo Lima, who transformed the museum into an important teaching and production hub, pioneering the creative use of pinhole photography. Despite his early death, when he was not yet 42, D’Ávila had seven solo exhibitions and participated in collective shows that helped to create an opening for Brazilian photography abroad. His first solo exhibition, Estudos I [Studies], was held at Galeria 167, in São Paulo, in 1976. From that point on, there followed a series of other solo shows, such as Estação da Luz (1981) at the Museum of Image and Sound, in São Paulo. 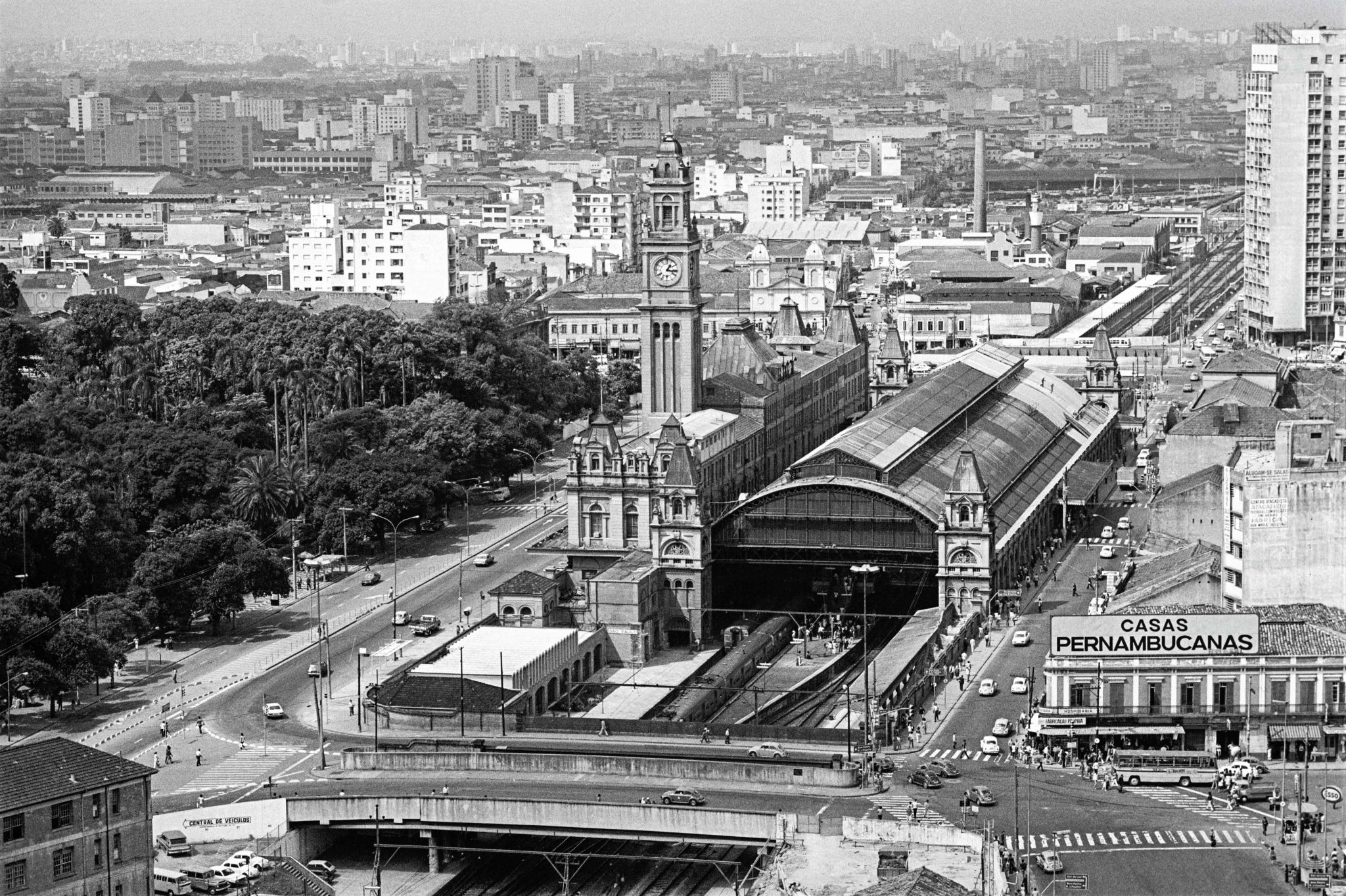 D’Ávila photographed the Estação da Luz in 1979 and 1980, when it was still part of the Federal Railroad Network, represented by the acronym RFFSA, which can be seen in many of the photographer’s images. Built between 1895 and 1901, the station was originally designed by the English railroad engineer Charles Henry Driver, and constructed by his fellow countryman and colleague James Ford. In 1946 the building was partially destroyed in a fire, most likely caused by arson, and its reconstruction extended until 1951. In the end of the 1990s, the station was restored and renovated by the architects Paulo and Pedro Mendes da Rocha, and delivered to the city in 2004, in commemoration of its 450th anniversary. The Estação da Luz was placed under governmental trust in 1982 by the State Council for the Defense of Historical, Architectural, Artistic and Touristic Heritage, or Condephaat .

This photo essay on the station was produced before the neighbouring area went through a period of severe urban decay: the period between the splendour of the apex of coffee exports – the line that ran through the station connected the city of Jundiaí, where the coffee sacks were loaded, to the Port of Santos – and its rebirth as a cultural hub and as a metropolitan transport station.

The Estação da Luz had fascinated photographers since it was built. Marc Ferrez, who documented the railway network from the northern to the southern regions of the country, captured a splendid view of the station from track level before its inauguration. Today, with the intense traffic of trains, this image would be impossible to take. After the inauguration, Guilherme Gaensly, who worked as a photographer for the São Paulo Tramway, Light and Power Company for many years, documented the station’s internal areas, such as the entrance hall and the restaurant, and also creative external views, where the building can be seen amidst the greenery of Jardim da Luz park. As can be seen in Gaensly’s images, the wall above the viaduct, photographed by A. C. D’Ávila, had been standing there since the building’s early years, most certainly with the intention of protecting the tracks from falling objects, as well as preventing suicide attempts.

The Estação da Luz project was very important to the photographer, to the extent that it became the subject of his MA dissertation, entitled Anatomia da Imagem Fotográfica [An anatomy of the photographic image] (1987). D’Ávila’s thesis has two parts: in the first, a single photograph systematically unfolds onto 78 mounting boards – a tenacious effort at a time that preceded digital programs for image processing, when the work had to be painstakingly done using a pair of scissors and a craft knife. D’Ávila gave special attention to an image with a character that he named “heartthrob” – and which I prefer to call “sad man with watch” – as he saw in this picture a synthesis of the issues that interested him: “Man’s relation to the architectural space, the approximation of opposites which generated tensions within the image, the constant concern with issues that lie outside the rigorous framing.” 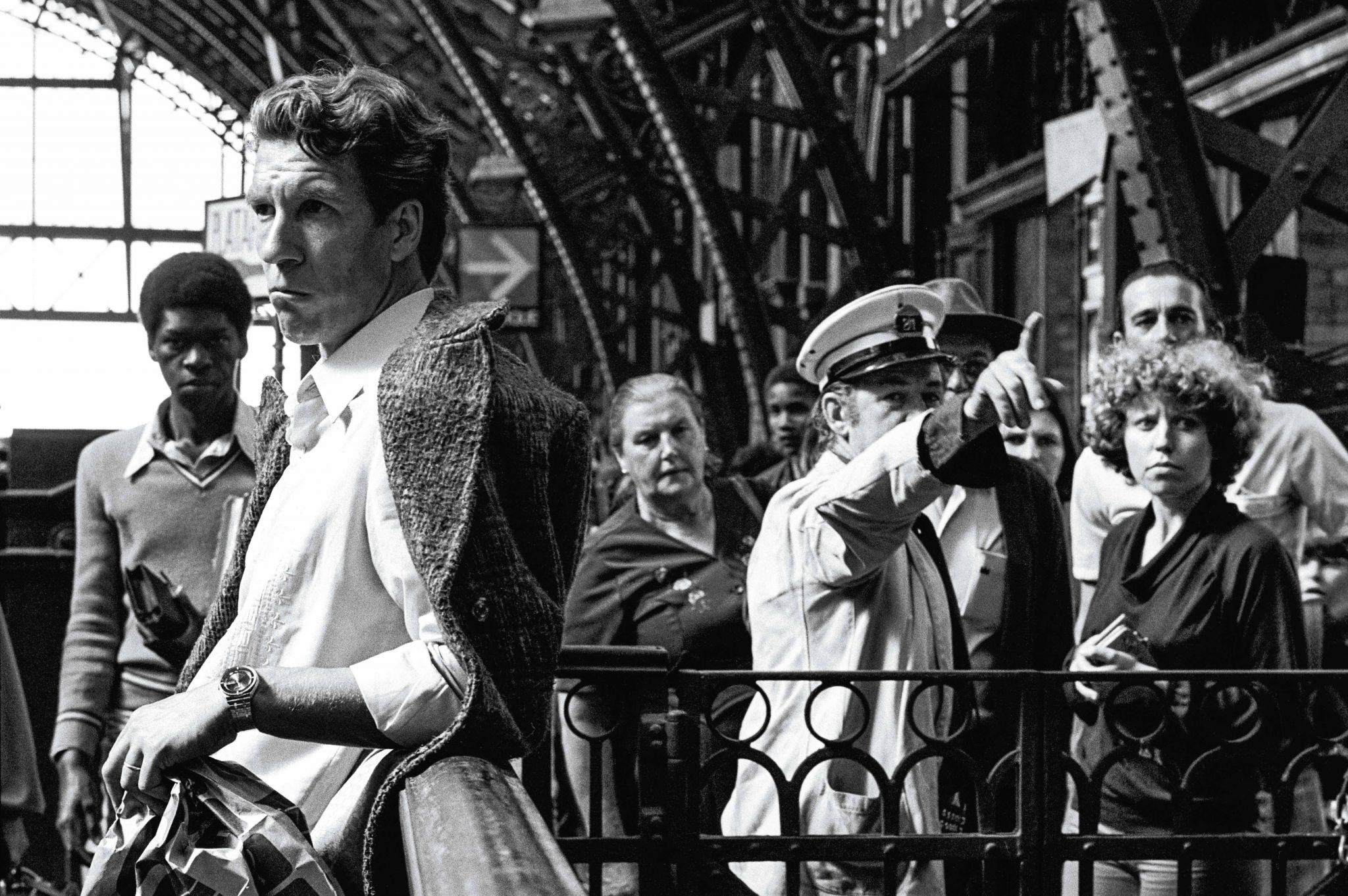 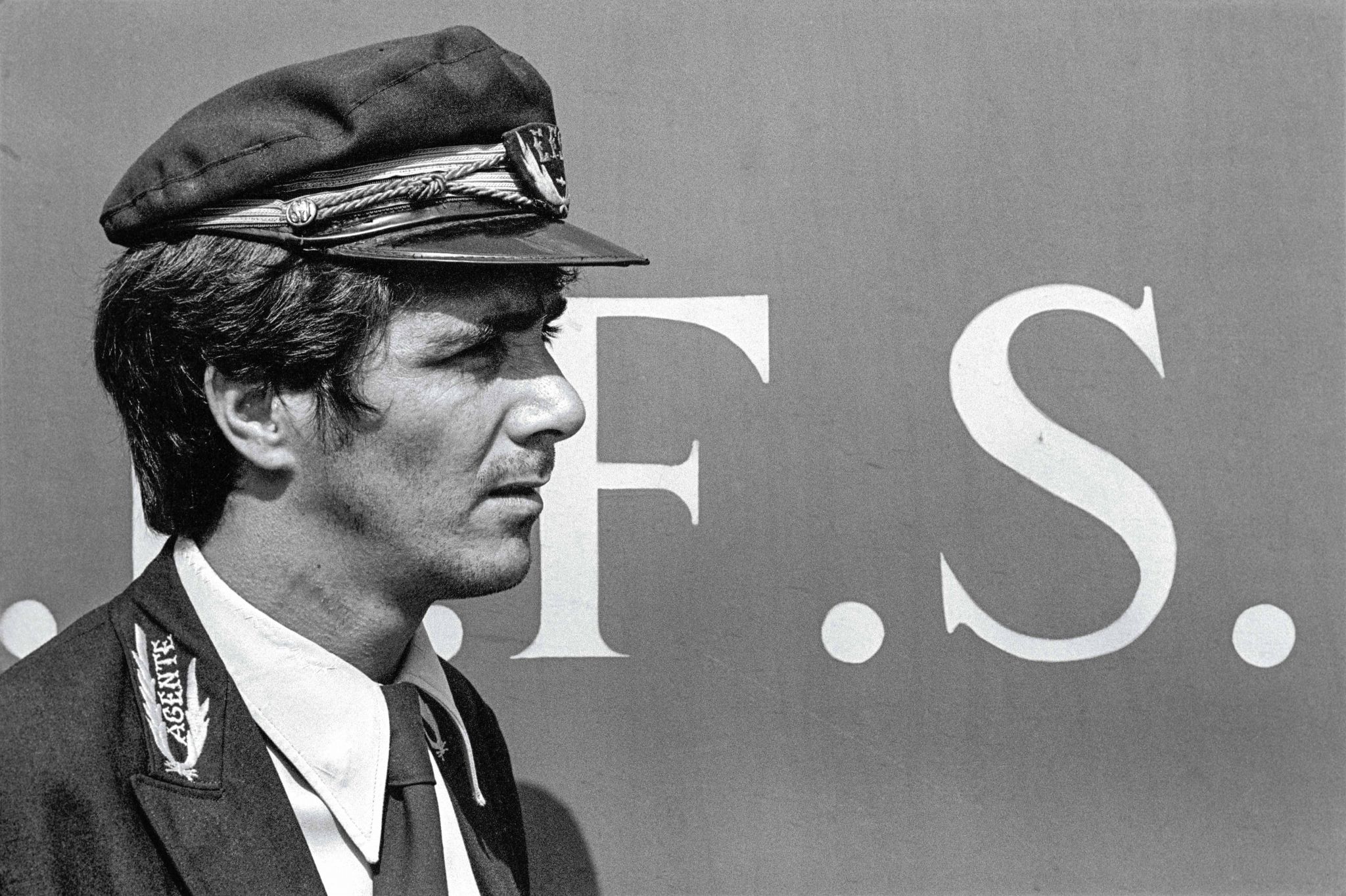 In the second part of the dissertation, D’Ávila identifies the circumstances and factors that guided the production of his documentation, and above all, describes his working method. To this day, detailed testimonies by photographers about the conditions that influenced their work are rarely found, not the small conceptual or factual text that serves as an introduction or justification for a photo essay or an exhibition, but the clear, technical statement. It is interesting to discover, for example, that A. C. D’Ávila felt compelled to document the Estação da Luz when, upon browsing the photographic historical archives of the place, he came across a “stained, yellowed” photograph which “documented, from a lateral angle, the Estação da Luz during its construction, in mid-1900s.” A photograph which, despite having been taken by an unknown photographer and in a poor state, had enough power to establish a silent dialogue between the photographer and his predecessors, and to light the creative spark needed to inspire a long-term project.

A.C. D’Ávila strictly followed his preplanned work program for Estação da Luz, moving from general views for contextualization, from different angles, to the interior of the station, where he gave special attention to the users and workers, focusing lastly on the railway equipment – trains and passenger cars -, always with a human presence. His work privileges the human dimension, although it establishes an effective visual commentary about the architectural particularities of the imposing installations of the station, emphasizing the presence of passengers and the way they make use of the typical railway facilities. The balance between the images of predominantly human content and those with a more graphical and architectural character are the best part of his work.

D’Ávila is an exponent of the first generation of Brazilian intellectual photographers, endowed with a solid cultural knowledge which surpasses the domain of photography to encompass other fields. He was interested in ecological and anthropological issues and both as a director of photography and filmmaker, having directed, for example, the short film Maria da Luz (1981). 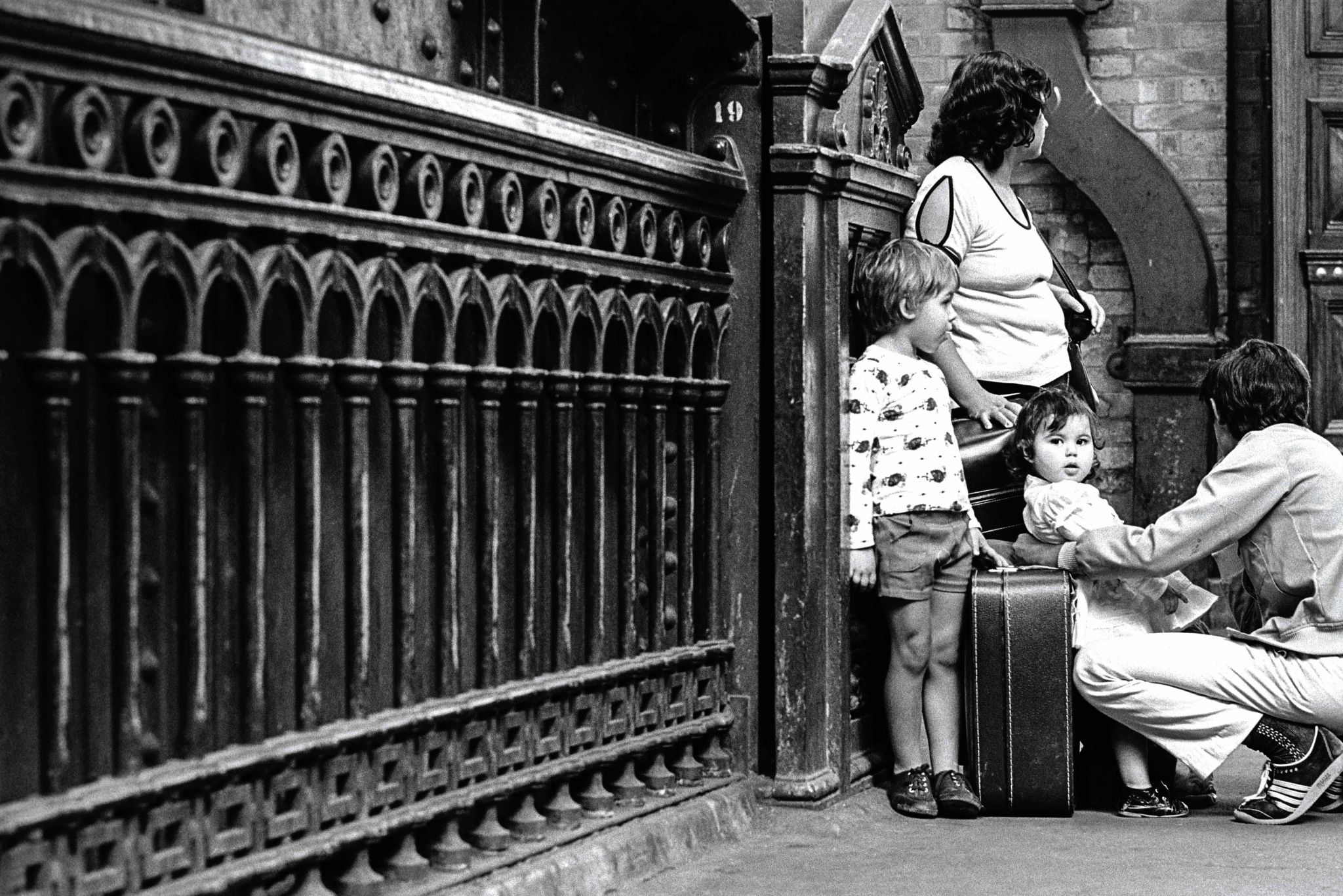 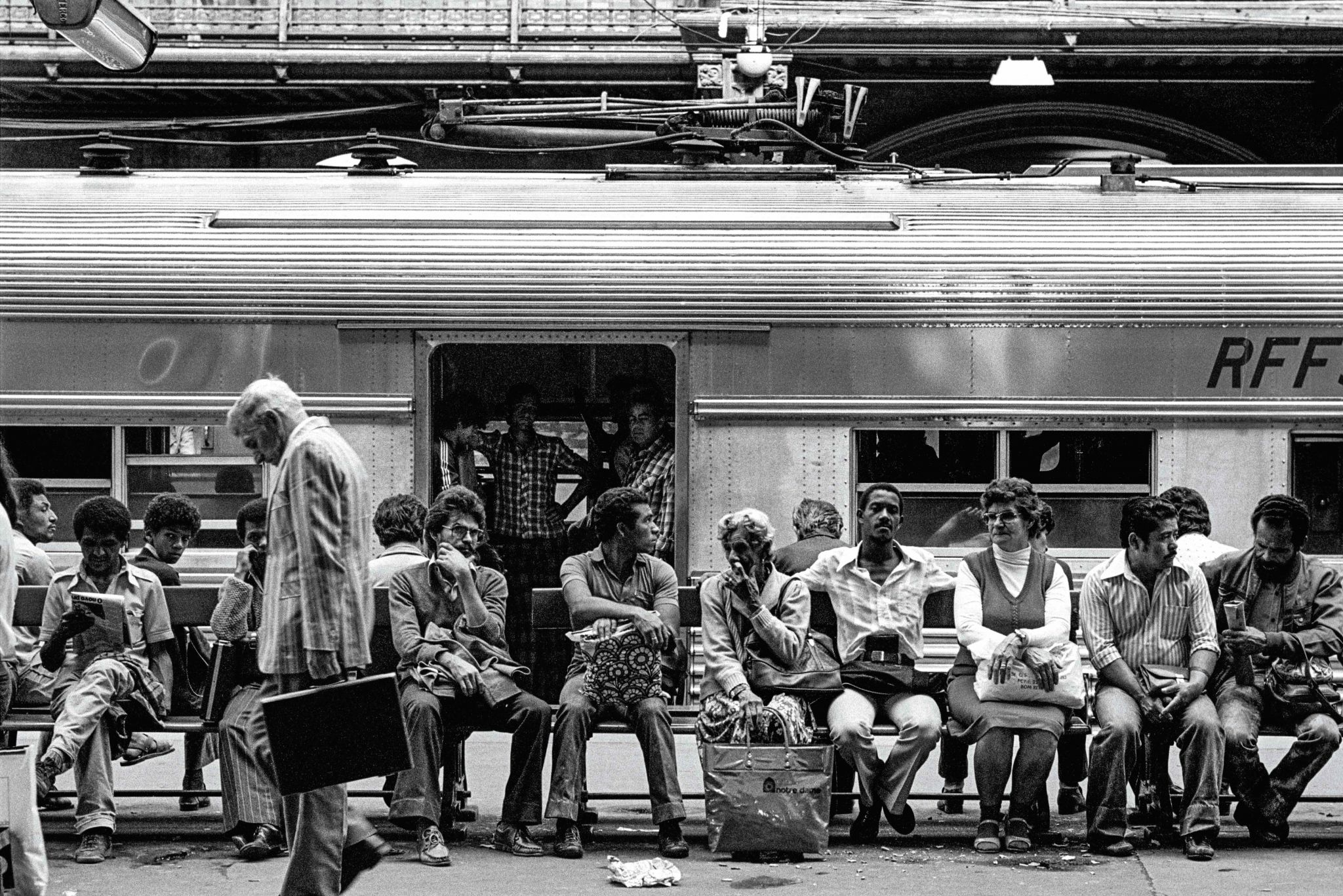 If we see D’Ávila as an intellectual or thinker, it is because, for him, reflection and planning preceded the action. He did not go out to the location waiting for situations he encountered to present him with scenes worth shooting – which is a common practice with street photography in which it is normal to “shoot first and ask afterwards,” like in an Hollywood Western film. Far from that, when D’Ávila headed for the location, he had already planned what he wanted to do, without closing the door to the unexpected. In this way, he worked in the same way that the photographer Lisette Model explained to Ralph Gibson: “There is no point in going onto the street if you don’t know what you want to do beforehand.” Documentary photography only moves on beyond a mere register of scenes and acquires authorial connotations when the photographer has a system or method of working which they apply to the external world.

This essay generated about a thousand images, some of them memorable, such as the photograph of the “heartthrob” (or the sad man with watch), that of the passer-by in front of a brick wall (which was the cover of the first edition of the Cadernos de Fotografia [Photography notebooks] published in 1980 by the Commission of Photography and Applied Arts) and that of the staircase with a group of men in suits to the left, where the composition is so effective that it can be considered a type of Brazilian The [RETICLE – book review] Steerage: both offer a brilliant social commentary, which is even more incisive in Alfred Stieglitz’s work due to the opposition of the first and third classes of the ship, but is equally paradigmatic in D’Ávila’s.

A number of other images deserve mention, such as those of passengers boarding (solitarily or in groups) trains; that of the group climbing the stairs, flanked by cold white light fixtures; some views in plongé (foregrounding the clock or elements of the roof) or, conversely, in contraplongé (emphasizing the metallic structures or the skylights); that of the family with the baby and the suitcase; that of the iron wall that obstructs the vision of the station almost completely.

Estação da Luz is one of the high points of Brazilian photography of the second half of the 20th century, an essay that preserves to this day its freshness and anthological relevance. /// 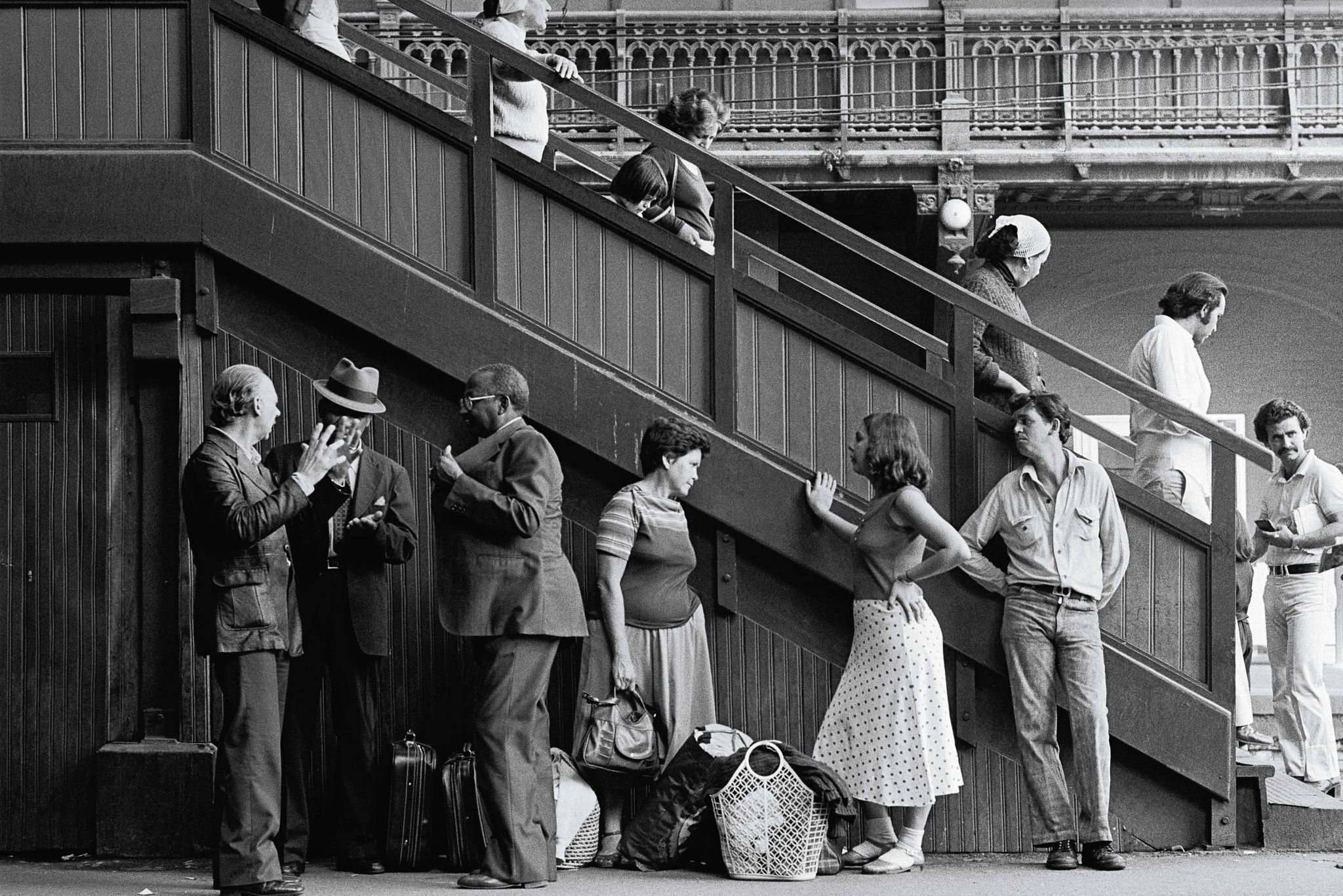 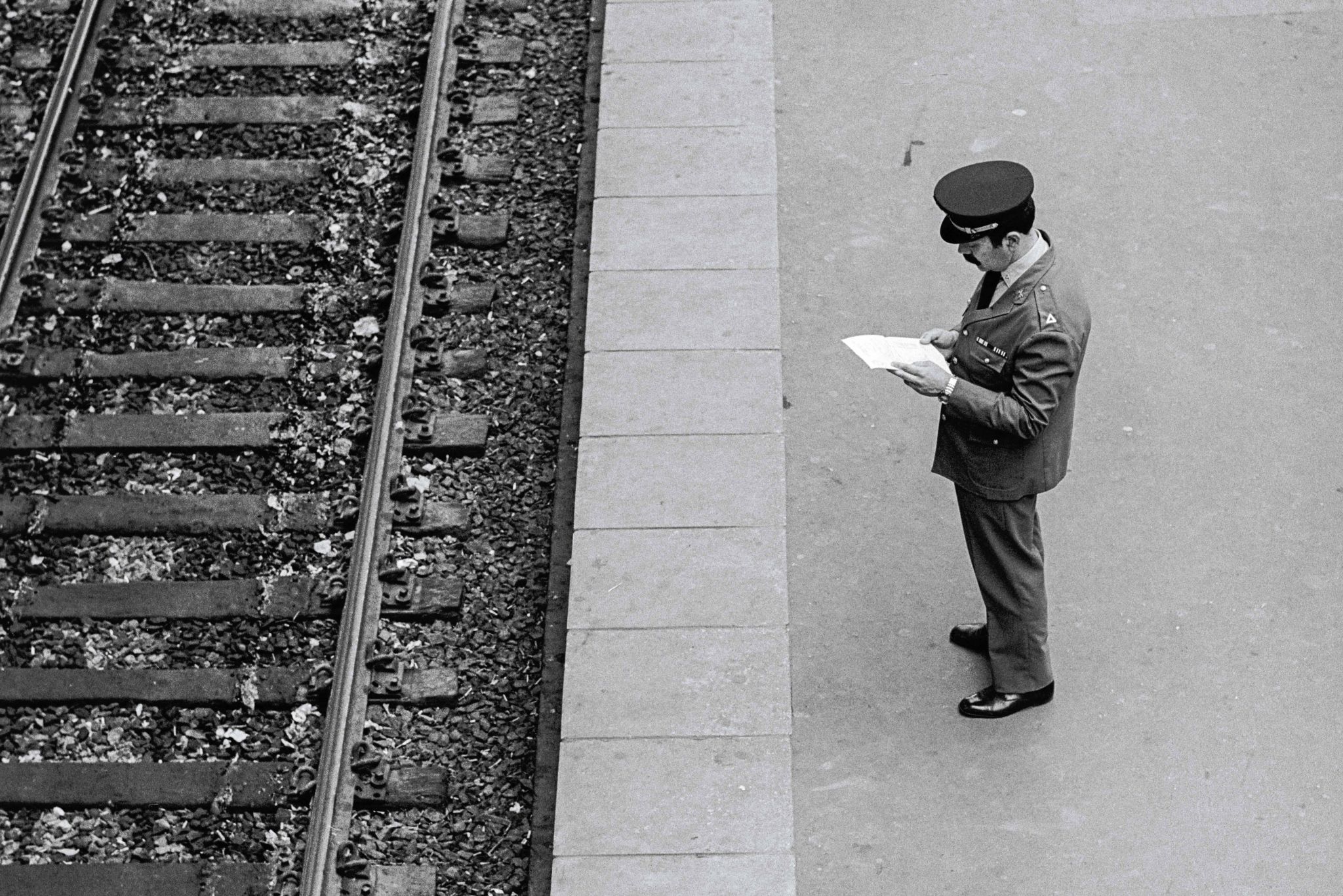 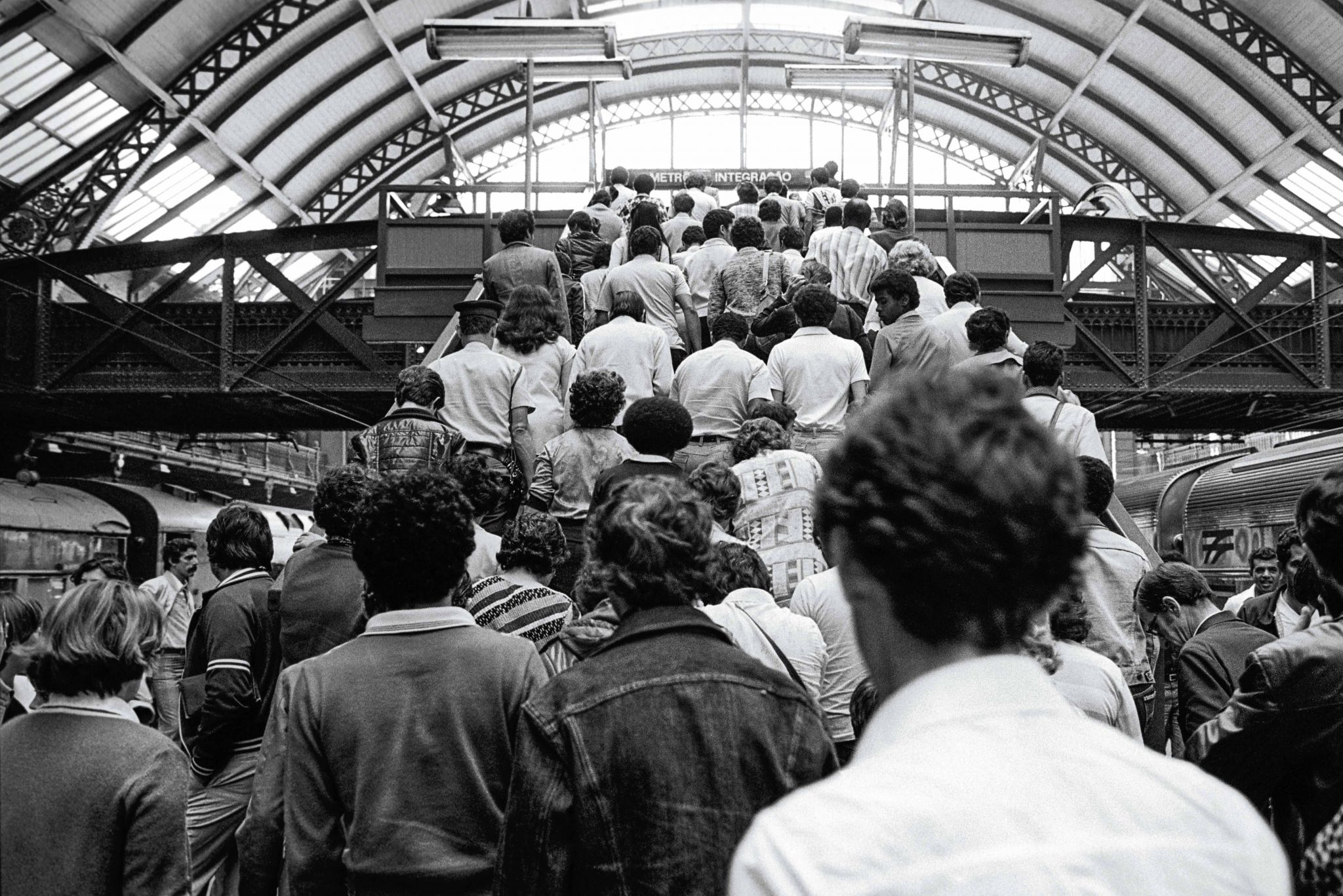 Zum thanks Santiago D’Ávila for lending these images.

Antonio Carlos d’Ávila (1955-1997) still photographer, cinema photographer and professor at the School of Communication and Arts at the University of São Paulo with the PhD thesis Fotógrafo Viajante: Amazônia [Travelling photographer: the Amazon].

Pedro Afonso Vasquez is the author of 25 books, two of which are about the relationship between photography and railways: Nos Trilhos do Progresso: a Ferrovia no Brasil Imperial Vista pela Fotografia [On progress tracks: railways in imperial Brazil seen through photography] and Fotografia e Ferrovia no Brasil da Primeira República [Photography and railways in the 1st Brazilian Republic] – both published by Metalivros.