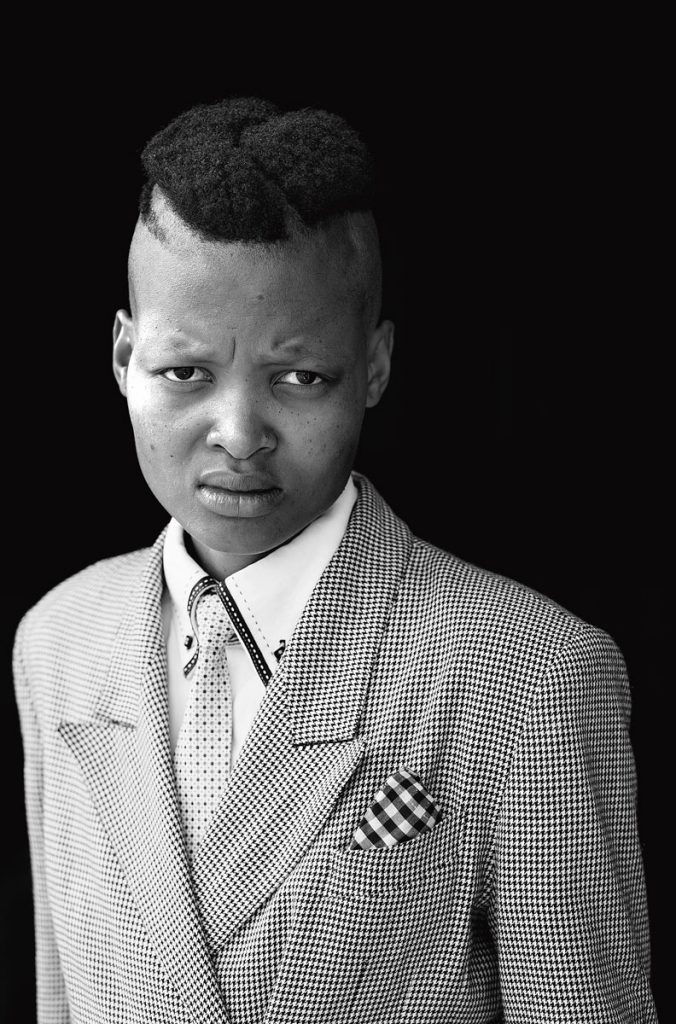 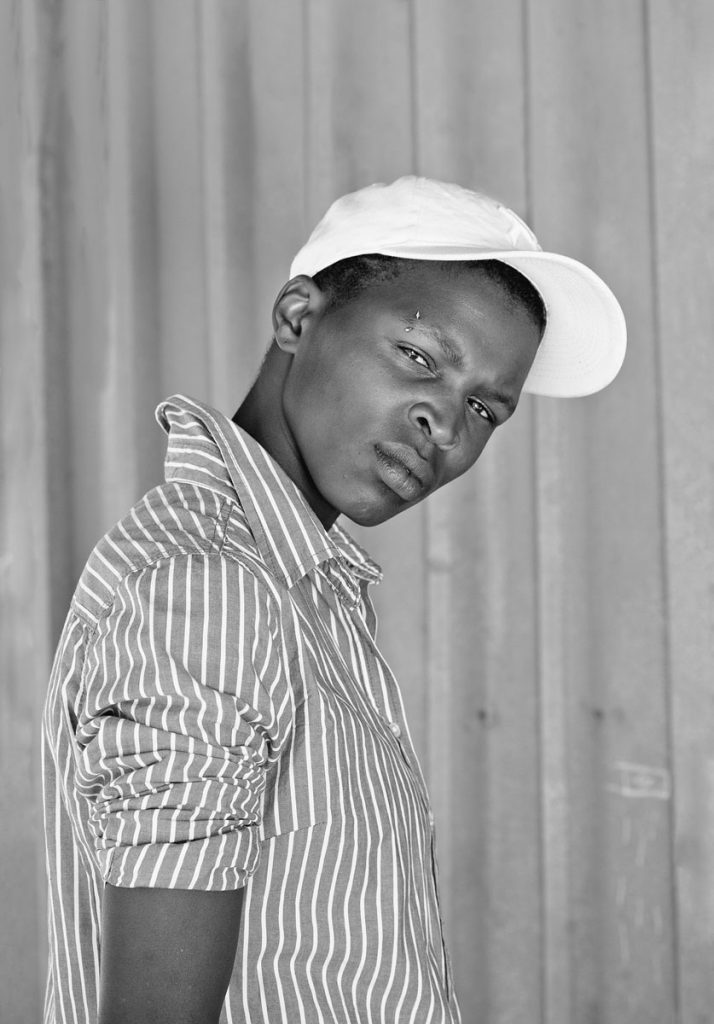 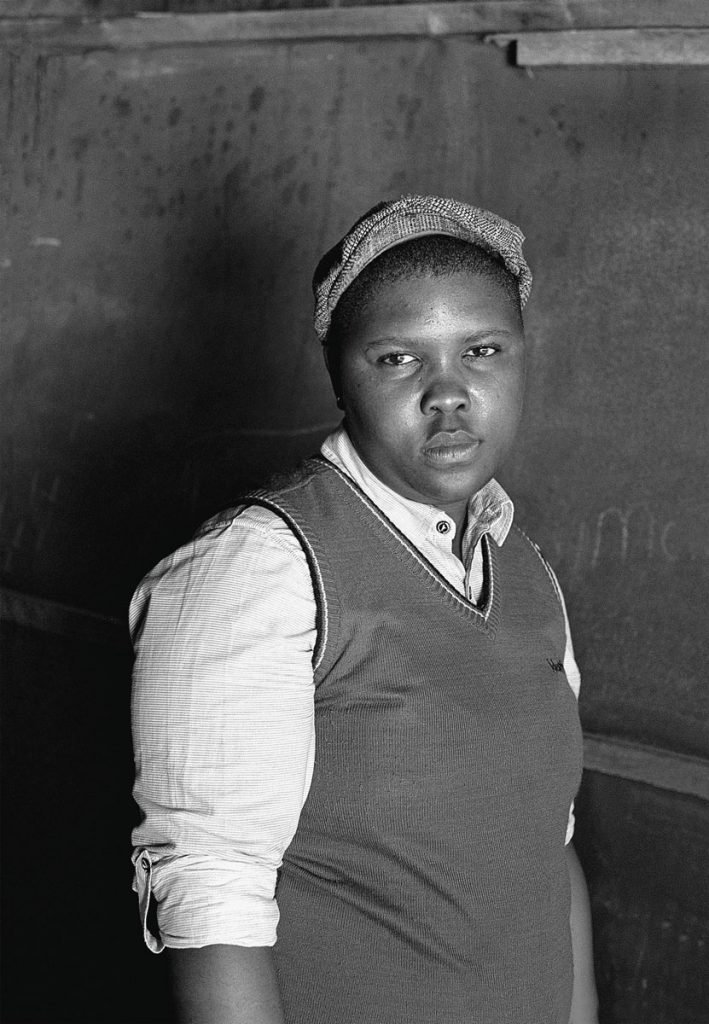 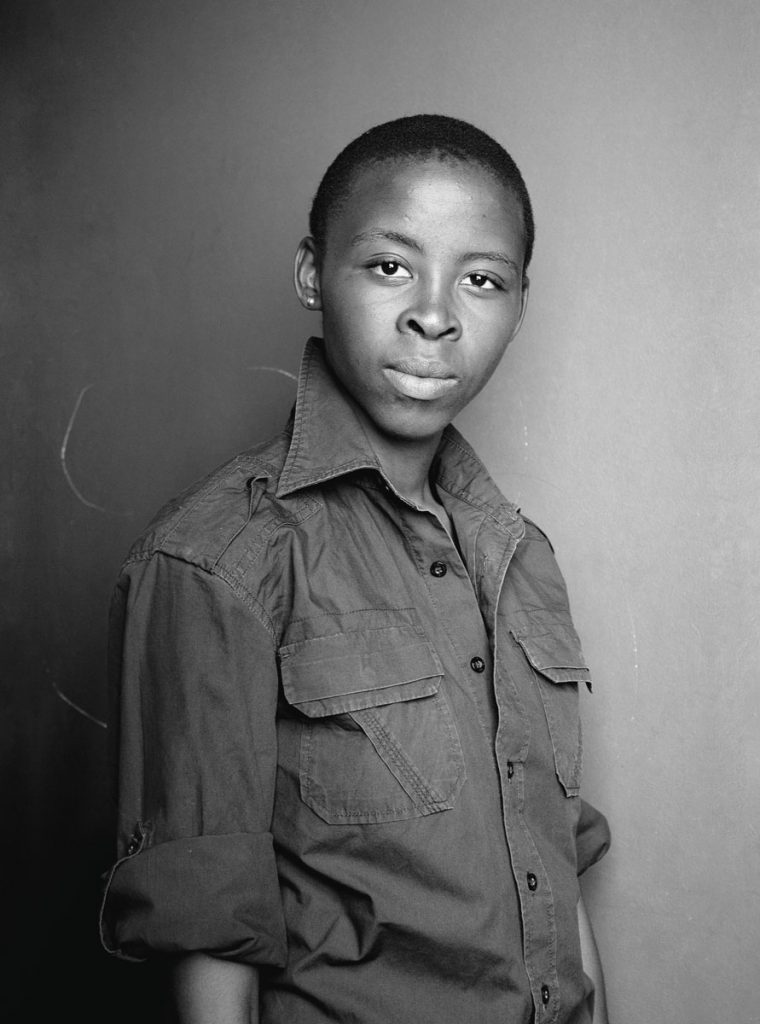 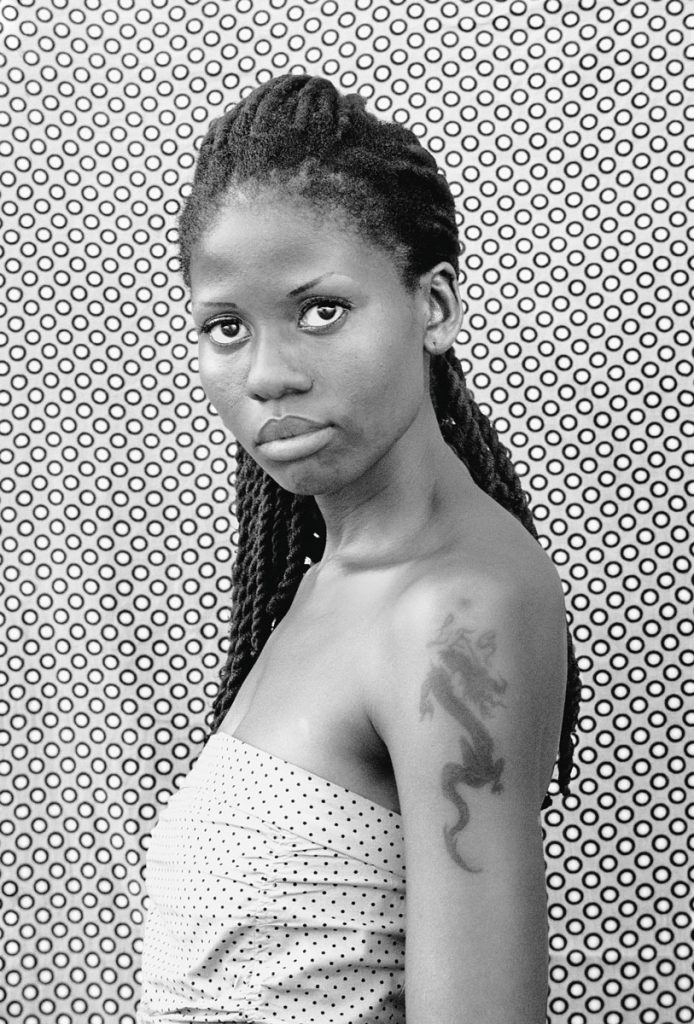 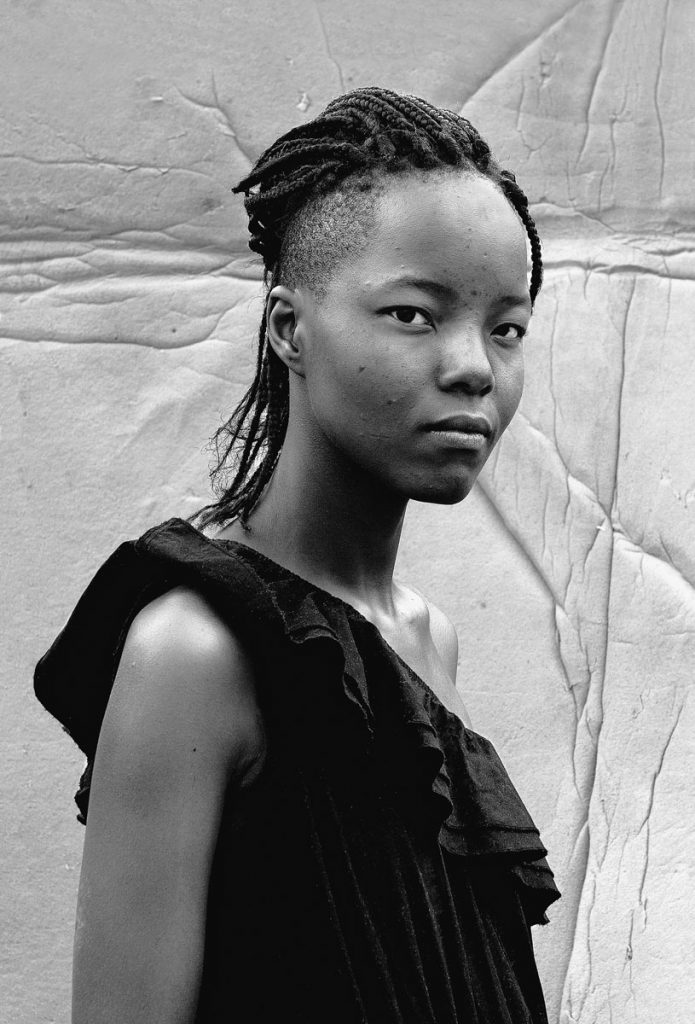 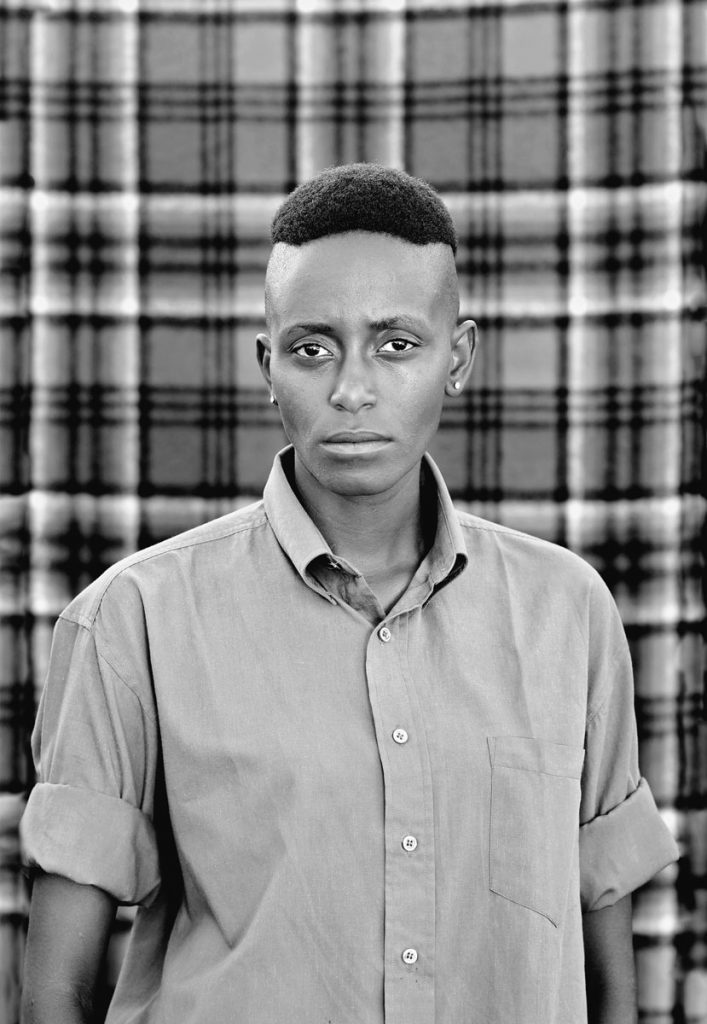 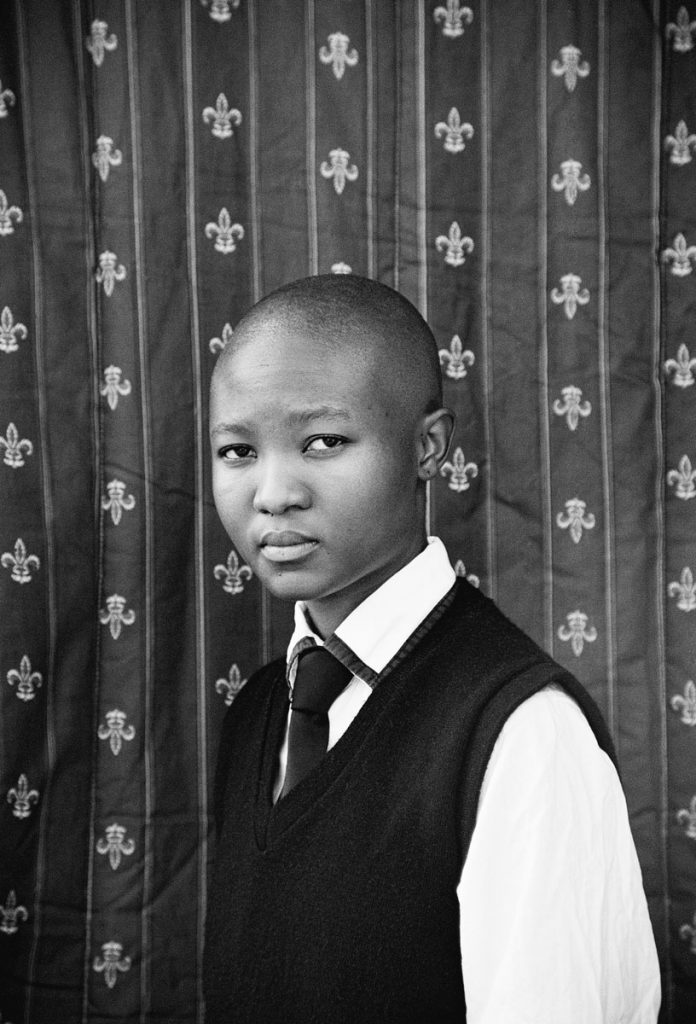 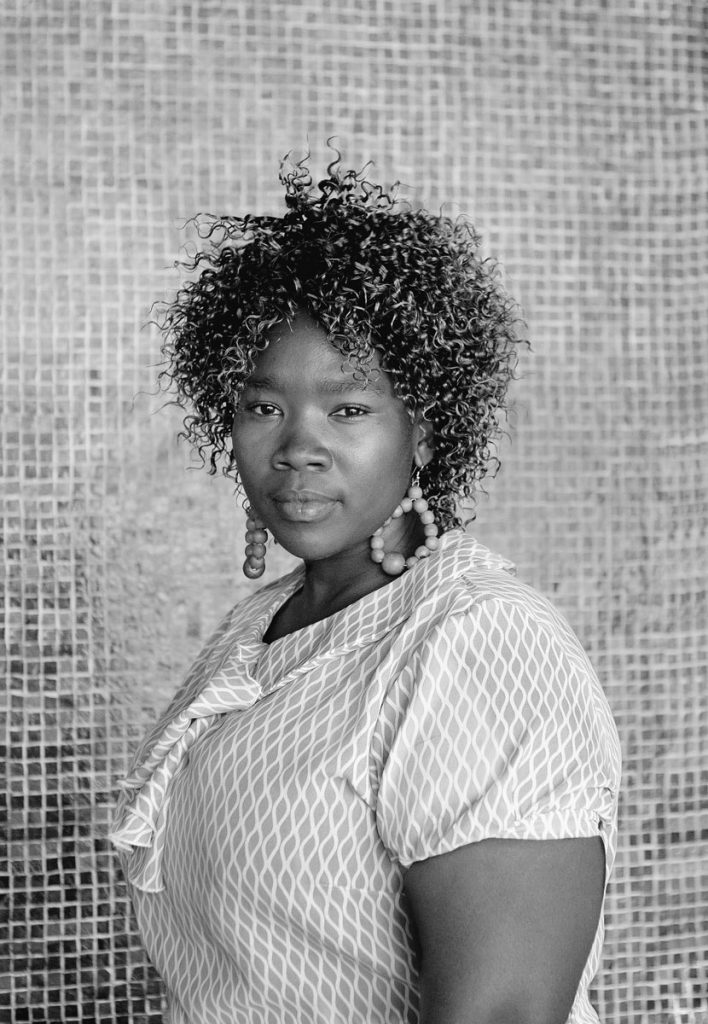 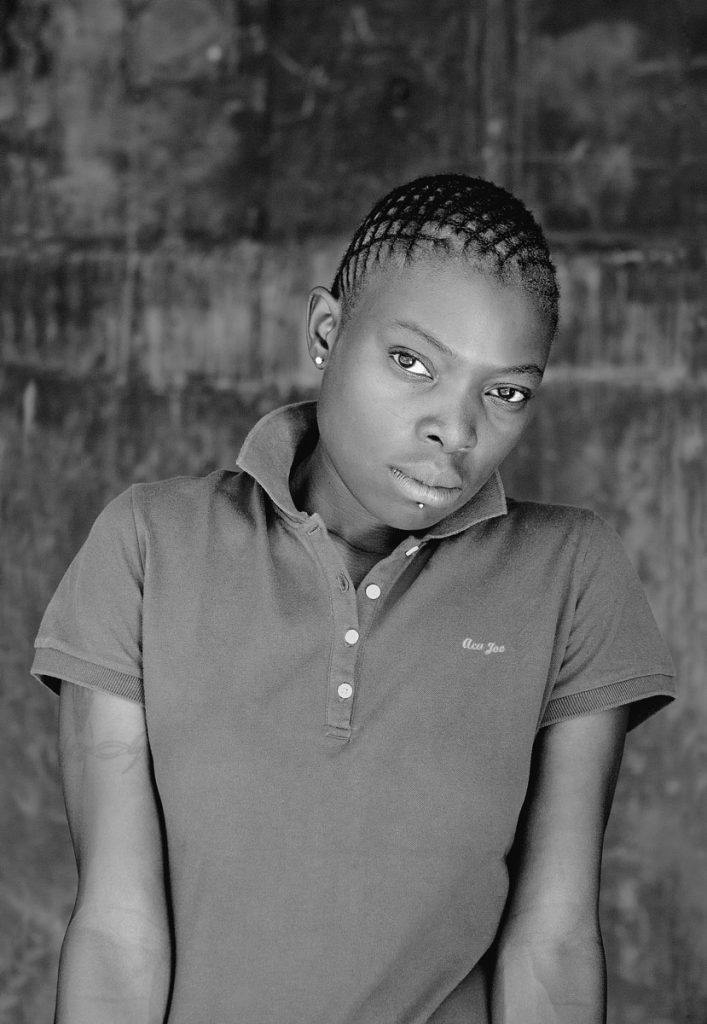 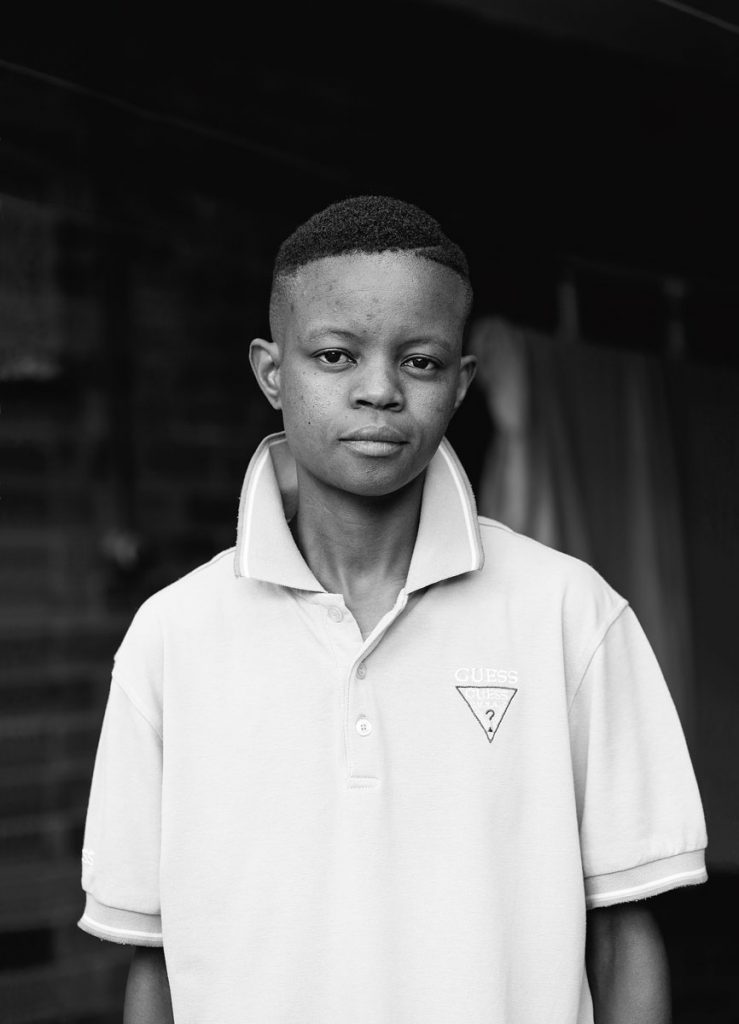 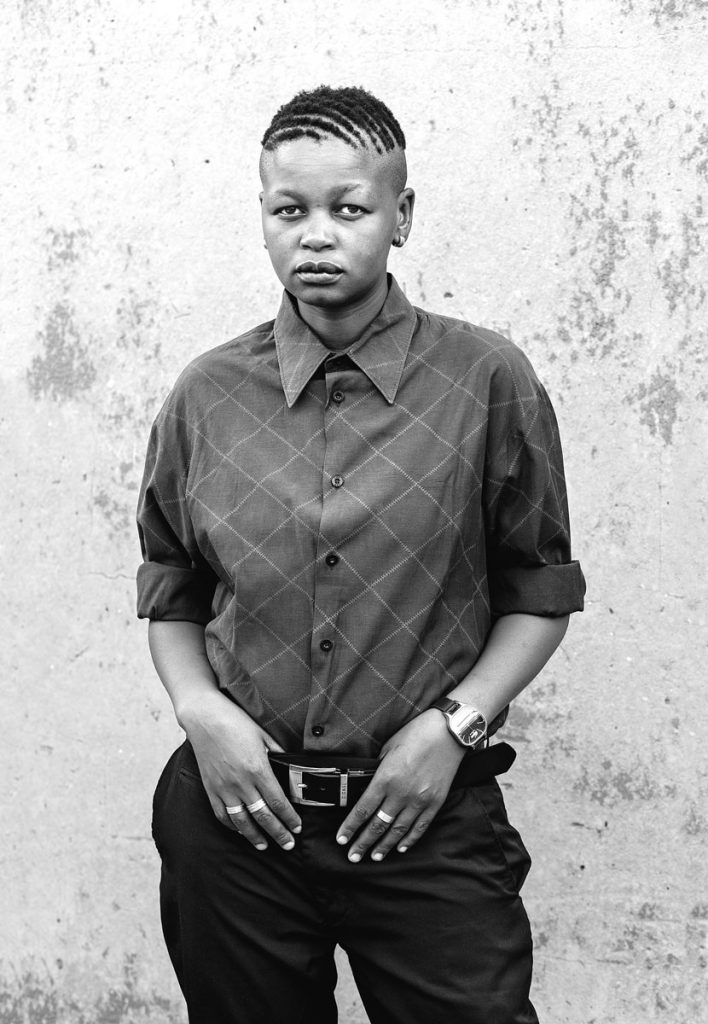 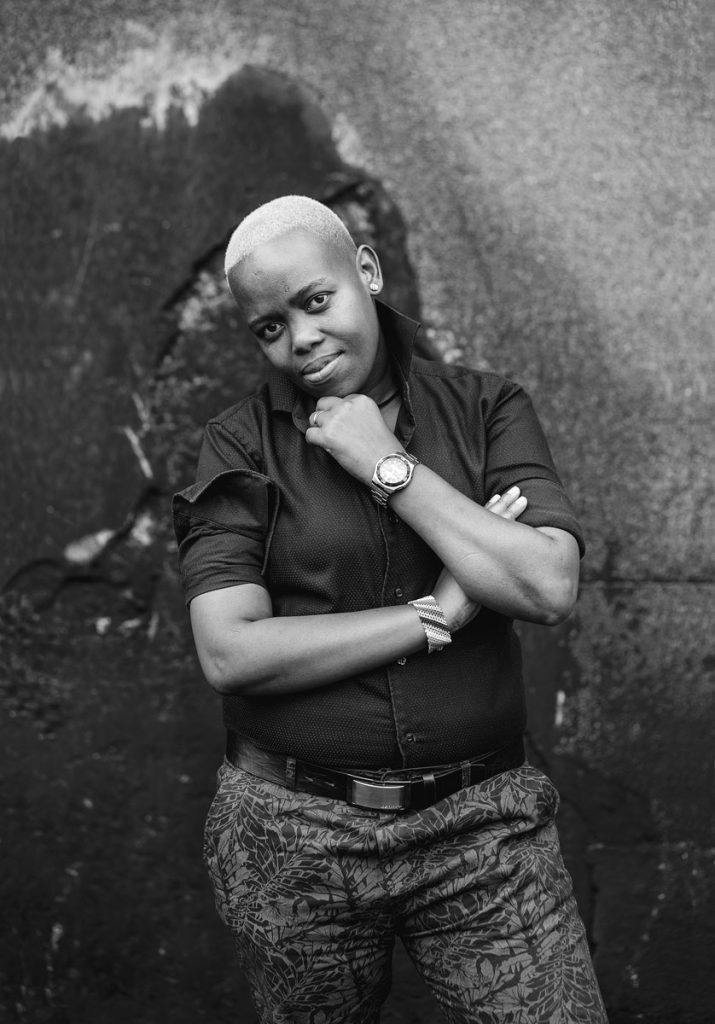 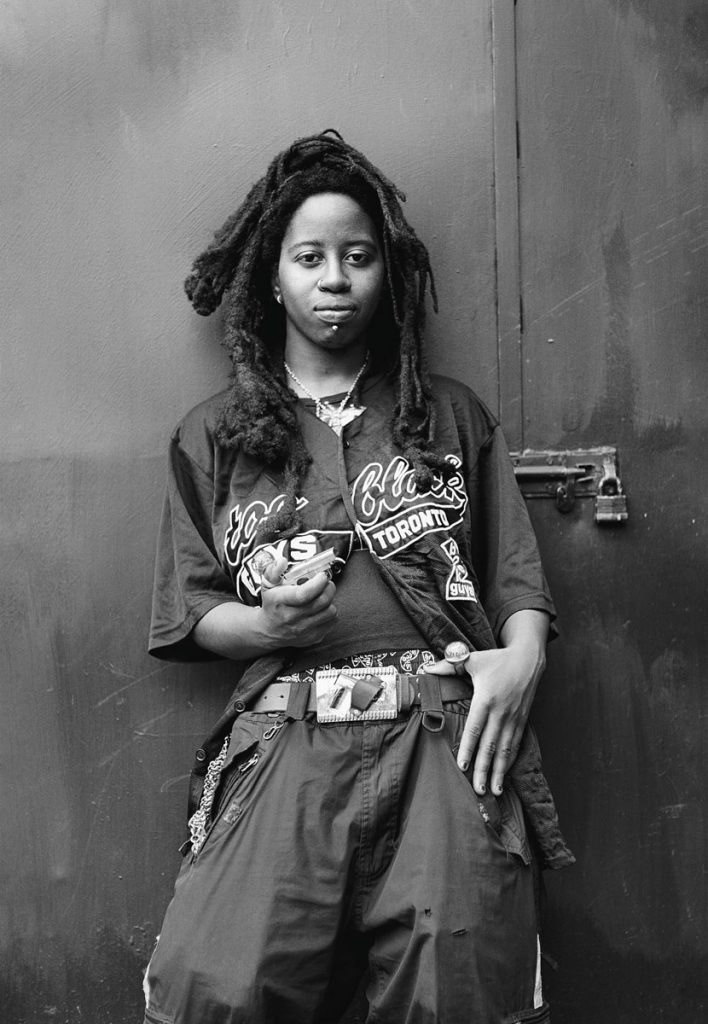 The conventional wisdom regarding the relationship of the photographic image to politics is that the image is not the politics, but that its status as a political “object” is determined by other factors: modes of circulation, the visual networks into which it is inserted, and the thing or person or event it documents. This is both true and not true of Zanele Muholi’s portraits of lesbian women – her friends, she says of them when she discusses her work.

It’s true in as much as a single portrait from this series – excerpted, decontextualised – is simply a portrait, the formal elements of which can be extemporised upon at length. And, despite their pared-down aesthetic, each of these single images is elaborately prepared for. Muholi, who lives in Johannesburg, travels some distance to the homes of her subjects where she inevitably spends a great deal of time in conversation, in setting up for the shot and choosing backdrops.

But several things mitigate against reading these images singly. The photos of Faces and Phases, the series which has over 250 images, are almost never exhibited as individual works (except of course when they are bought and displayed in private homes), which suggests that each, single image is inextricable from the series that has been ongoing for at least a decade. Muholi – who began her career at the Market Photo Workshop, a school founded in 1989 by the photographer David Goldblatt, and completed an mfa in Documentary Media at Ryerson University in Toronto in 2009 – has always seen her photographic work as inseparable from her activism, having founded the organisations Forum for the Empowerment of Women in 2002, and Inkanyiso, a forum for queer and visual media in 2009.

The serial nature of this project is the key to understand Muholi’s modus operandi and the impulses that underpin her activism and her art. This aspect of her work places her alongside artists like Taryn Simon, Walid Raad and Christian Boltanski, for whom collections, archives and series of similar pictures (their own or found) are vehicles for thinking about how images work on their own and collectively. Simon, Raad, Boltanski and Muholi are invested not in single works but in the cumulative impact of an entire archive of similar works.

In Muholi’s case, the impact she seeks is in service of her work in the LGBTI (lesbian, gay, bisexual, transgender and intersex) community, which involves not only photography but various forms of social activism. One of her aims is to draw attention to the chasm between the merits of the South African constitution, in which gay marriage is legitimised, and the real-life situation in many communities where gay people, and especially lesbians, are targeted in often-vicious hate crimes. Muholi has photographed many funerals of women killed in “corrective rapes”, one form of violence against lesbian women not uncommon in South Africa.

Muholi’s work may also be cautiously compared to contemporary memorials like the exhaustive display of photographs of the Cambodian people who were executed by the Khmer Rouge from 1975 to 1979, now displayed in the Tuol Sleng Genocide Museum in Phnom Penh, or the Augustus F. Sherman portraits of immigrants held for special investigations at Ellis Island in Upper New York Bay from 1904 to 1920. The aesthetic and associated moral and emotional impact of such memorials is premised upon the amassing of images, names or objects into a single but monumental memento mori. Muholi’s project functions as a memorial to the extent that each person she photographs stands in for those who have been raped or murdered, or in some other way subjected to homophobia. It differs from these other projects in one important respect, however, in that Muholi’s work is not premised upon victimhood. Rather, in agreeing to participate – as Muholi often explains – her subjects honour and call to mind lost friends, sisters and lovers, but do not occupy the frame of the photograph as victims.

Photography in South Africa, given its close relationship to colonial and apartheid history, is fraught with questions about victimhood, autonomy and identity. Portrait photography, in particular, is deeply implicated in the racism of the colonial gaze. In Muholi’s work, however, one has a clear sense of the return of the gaze of her subjects, and of an engagement in which the photographer and photographed are evenly matched in relation to power.

Seriality and repetition, then, are Muholi’s audacious response to the serial nature of crimes against LGBTI people. She amasses a veritable army of refusers, rank upon rank of whom square themselves up to the câmera and look back at anyone who wishes to deny them space in the world, who cannot look at them. Each vertical, black-and-white portrait contributes to Muholi’s indefatigable recruitment campaign. Each person she photographs signs up, takes up a place beside all the others who have done so already in a collective protest. The overall aesthetic of the series – what one must face up to, grapple with – is austerity: the images en masse are lean, expedient, disciplined.

Her project derives some of its power from its sheer volume and its forward-pressing chronology. Muholi’s objective is to create a history that otherwise would not come into being, but also to make a testimonial and a memorial. Her archive of faces is incomplete – there are always more people, more faces, more stories. This aspect of the work gives rise to a quasi-mythology of queer identity that insistently presses against the mainstream in order to be allowed entrance into public culture. As long as the LGBTI community remains marginal, outside of accepted society, Muholi will make her photographs. But mythology aside, and in something of a counter-intuitive manoeuvre, Muholi wants to make her subjects ordinary, to de-exoticise them. One way to do this is through bloody-minded repetition and sheer strength of numbers.

And yet, as unstoppable as the beat of her project is – page after page, image after image – there is the undeniable singularity of each photograph. And here is where I want to try to demonstrate that the politics is also in the photograph as a single object, a caught moment. This requires some analysis of what is meant by politics, and a retrieval of the portrait from the idea that it represents a remnant of a bourgeois version of identity, as established in the nineteenth century. Indeed, it is in challenging this notion of identity via the portrait that Muholi’s work is at its most interesting.

What matters here is both individuality and belonging. The latter for political expediency and a sense of solidarity against something; and the former precisely because it is each person, each lesbian person who understands that for all the comforting semblance of belonging, of having sisters at your back and beside you, you are, at the end of it all, alone. Muholi is asking a great deal of her subjects. Are they, she wants to know, individually – on their own – up to it?

The austerity of the series as a whole is also at play in each shot since the question is very, very serious. A great deal is at stake. And so the politics of the photograph exists in this individual gesture, this private, intimate and risky contract into which the subject of the photograph enters with her challenger, who is also her friend. It’s a fuck-you moment. Fuck you for asking me, fuck you all for looking at me, fuck you if you think I’m going to back down.

This complex of responses is at the heart of the idea of friendship upon which the work is premised, with its playfulness, necessary irritability and irresistible intimacy. At the moment of the shutter’s opening, the photographed person looks straight into the eye of the lens, which is Muholi’s eye – and later ours – and declares something about themselves and their relationship to the photographer. It’s a breathtaking moment, when you stop to consider it, singly and separately, from the one before it and the one after it. But also an almost unbearably poignant moment. It redeems something from the collective nature of the hundreds of photographs in the series, something that is entirely for and of the person being photographed.

This is not only deliciously ironic – that each portrait mitigates against relegation to a group identity – it is also political. Each photograph contains the time of its making. For all the studied casualness of the photographed women, these are slow images. Slow in the sense that their making extends out of relationships and thus out of time spent. But also in the sense that each person photographed, though asked to gaze, like everyone else, directly and unsmilingly into the camera, is given the time to compose herself, to generate an identity for the moment of the photograph (though how long this identity lasts, how it fluctuates is no business of ours). The implicit question is: “Who will you be, in this moment of our photographic contract, that will make you utterly unlike the others?”

But slow also in the formal sense. The language here is of the studio portrait: the aspirational genre par excellence in both its African and European traditions. The sitter (to use the term only metaphorically, since Muholi’s subjects are standing) must arrange themselves, through dress and posture, for their audience. This implies an element of playfulness, of make-believe even, that is at odds with the austerity of Muholi’s work. The photographer and her co-conspirator choose a backdrop, which is encoded into the mythology of the project in its (unresolved) entirety. These are not incidental backdrops. They suggest a whole raft of aesthetic and political decisions: a makeshift curtain, a window, a brick or zinc wall, a metal shutter door, a blanket or cloth. These become the inscribed surfaces, the patterns and textures of Muholi’s body of work. The studio, that bourgeois space, is redefined here in relation to the person and the project. The subject does not so much enter the studio to be shot as generate the studio from her own place, from her own sensibility. Muholi’s backdrops are provocative, playfully repeated, refusals of the studio, each one containing a secret exchanged between photographer and photographed, each at once a deeply personal and political gesture.

In a short documentary film made by Human Rights Watch in 2013 about Muholi’s work, one of the women photographed for Faces and Phases remarks, “I had fun.” As she says this, Muholi is standing over her, braiding her hair. In another scene, Muholi watches with immense pleasure while a friend subjects herself to having her hair shorn in order to recreate a photograph shot several years earlier. “Look how beautiful this person is,” says Muholi as she looks on. One infers from this, and from the photographs themselves, that the gift Muholi gives her “participants” (as she calls them) is their own idiosyncratic, elegant and singular beauty. Her extraordinary contribution to the struggle against homophobia and to the tradition of the portrait photograph, especially in its South African iteration, is to hold the campaign and the person in a delicate and productive tension, to allow the particularities of each person photographed to transcend the terms even of Muholi’s own powerful project. ///

Zanele Muholi (1972) is a photographer and visual activist from South Africa. She is an honorary professor of the Bremen University of the Arts, in Germany. Among other awards, she has received the icp Infinity Prize for Documentary and Photojournalism (2016) and was a finalist for the Deutsche Börse Photography Award (2015). Her series Faces and Phases has been shown at the 12th Kassel Documenta; the South African Pavilion of the 55th Venice Biennale; and the 29th Bienal de São Paulo.

Bronwyn Law-Viljoen is an Associate Professor and head of Creative Writing at Wits University. She is the co-founder and editor of Fourthwall Books and former editor of Art South Africa magazine. She has written on South African art and photography for various publications and has published several short stories.